Antwan Kimmons: A spark plug on and off the court 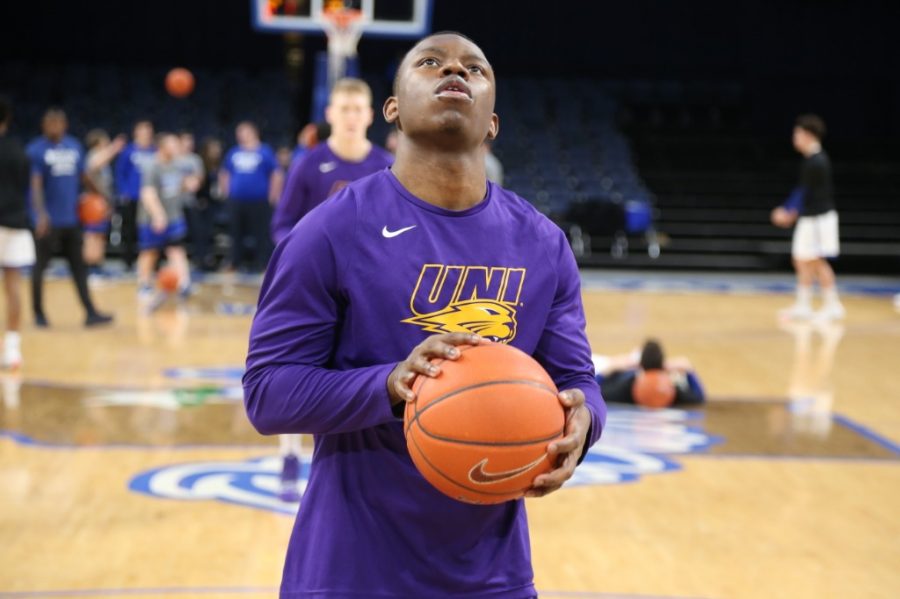 UNI basketball player Antwan Kimmons returns to the court with his signature energy which gave him the nickname "spark plug."

As the 2021-22 UNI men’s basketball season approaches, it appears that this season will be more of a return to what we’ve known compared to last year’s unprecedented circumstances caused by COVID-19.For sophomore guard Antwan Kimmons, this year’s return to normalcy will be a welcomed sight. Kimmons, who had to leave the team early in the year during the 2020-21 season, has had quite a difficult year and a half. But because of his resilience and dedication, he is back with the Panthers and is focused on making this the best possible season for the Panther men’s basketball team.

“COVID was really hard being away from my mom and my little sister. My mom was going through some things and I felt like me being the only man that I had to go home to help them,” Kimmons said. “Mentally I was struggling a lot, and I felt like being here wouldn’t have went well for me personally. But I decided to come back in August for my coaches and my team, and I think I made the right decision. Now I’m ready to be back and do what I do best.”

Collegiate and professional athletes are oftentimes seen as immortal and almost superhuman to an extent, leaving most people to perceive them untouchable. But Kimmons wants everyone to know that they have struggles just as much as everyone else, if not more so.

“Playing football or basketball isn’t easy. The daily grind that we got to go through every day is not easy, and we’ve been doing it our whole lives. It’s hard, it’s really hard, and not just for me but for everybody. I felt like last season would have been better for everyone to be with their families because we all had that struggle to deal with,” he said.

As a player during his freshman year, Kimmons earned the reputation of being the “spark plug” off the bench for the Panthers. He would routinely come into the game in the second unit and provide the extra juice that the team needed. His career high of 13 points came on Jan. 26, 2020 against Loyola-Chicago, leading the Panthers to the 67-62 overtime win.

“Everybody has a role on the team and I feel like that’s my role. Whether that’s coming off the bench or starting, I’ve played like this my whole life. And it reflects on my personality too. I’m pretty laid-back and try to have fun because life is too short to do otherwise, so I try to mix my personality with playing basketball. That way when I go out onto the court, I try to bring high-level energy. I feel like everybody feeds off it too, and I feel like that’s just my personality and who I am. I didn’t really think of myself as the spark plug but someone gave me the nickname and it kind of caught on from there,” said Kimmons.

The Panthers were picked to finish in third place in the Missouri Valley Conference this season, behind Drake and Loyola-Chicago. But Kimmons and the rest of the men’s team don’t buy into the preseason projections.

“Those are just rankings. People aren’t here to see us practice or anything, so they’re just going off last year and what other teams did. We don’t really pay attention to that stuff but obviously we see it. They had us finishing third or fourth two years ago and we won the conference regular season title. So you can’t really look at that stuff because it’s just other people’s opinions. But we’ve got a really good team this year,” he said.

The Panthers will be returning much of the same roster from last season, including preseason MVC Player of the Year A.J. Green coming off of hip surgery last year. Other notables include 2020-21 Newcomer of the Year Bowen Born, preseason all-MVC center Austin Phyfe and veterans Trae Berhow, Noah Carter and Tywhon Pickford. Top to bottom, this UNI team looks ready to compete in a highly-competitive Missouri Valley Conference.

“There’s so many possibilities for this team. I’m hoping that we mesh well together and I think we will. We’ve all got good chemistry, everybody gets along and we all make each other laugh. A.J coming back is huge since he’s the best player in the league. And then Phyfe, who’s the best big man in the league in my opinion. We’ve got some good shooters, maybe three or four of the best shooters in the conference, and some great defenders like Tywhon and Nate Heise. It should be good and I’m really excited to see what happens,” said Kimmons.

After basketball, Kimmons has high aspirations for giving back to the community and doing his part to help. He is majoring in sociology and hopes to have a career in the law enforcement field after graduation.

Kimmons also wants to build a recreational center back home. In his words, he wants it to be “the best one ever built.”

The UNI men’s basketball season begins on Tuesday, Nov. 9 against Nicholls State in the McLeod Center, with tipoff scheduled for 7 p.m.

“Come out and support us and pack the McLeod Center. It’s definitely going to be a fun season,” said Kimmons with a smile, which is a fitting expression for the player nicknamed the Spark Plug.