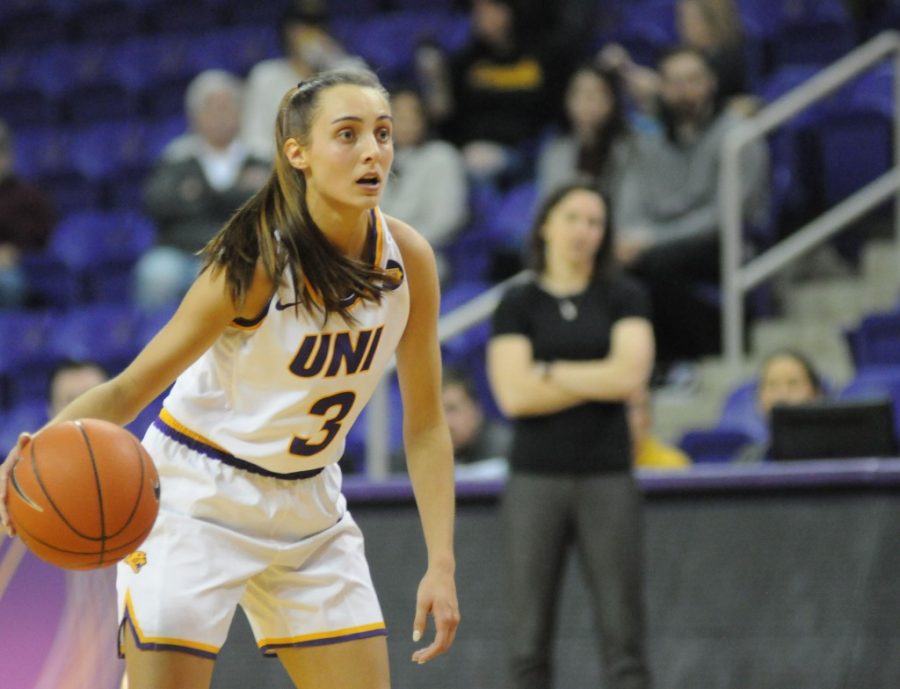 The McLeod Center was home to an in-state women’s basketball matchup on Sunday, as the ninth-ranked University of Iowa Hawkeyes made the 90-mile trip to Cedar Falls to take on the UNI Panthers. Both teams entered the game undefeated. The Hawkeyes came in 2-0 with blowout wins over New Hampshire and Samford, while the Panthers came in 1-0 with a 63-54 victory over Saint Louis. The Hawkeyes were also good a year ago, finishing 20-10 and reaching the Sweet 16 of the NCAA Tournament. Despite stretches where they played at a very high level, the Panthers fell to the Hawkeyes, 82-61.

The Panthers came ready to play, staying within striking distance against the highly talented Hawkeyes for much of the opening quarter. However, as the quarter progressed, the Panther offense went cold and the Iowa offense heated up, allowing the Hawks to go on a 15-0 run late in the period. Iowa went into the quarter break with a 24-9 lead. The Panthers had a much better second quarter, only being outscored 17-15 as well as going on a 6-0 run late. Despite this, Iowa still held a commanding lead, 41-24, at the half.

The teams traded mini-runs early in the third quarter. Every time the Panthers would score a few points in a row, the Hawkeyes would do the same. Back-to-back UNI three-pointers, one each from Kam Finley and Cailyn Morgan, got the Panthers within 14 points and forced an Iowa timeout. The Panthers got even closer, getting within 13 points, to close the third quarter, trailing 57-44. Despite a valiant effort, the Panthers couldn’t complete the comeback in the fourth, falling by a final of 82-61.

Finley was the leading scorer for the Panthers, finishing with 17. Maya McDermott was close behind with 14 points, and she led the team in assists with four. Bre Gunnels pulled down a team-high eight rebounds.

“I think Iowa’s a very good team,” head coach Tanya Warren said after the game. “I thought we left a lot of buckets out there. I’m very pleased and proud of how we fought to get ourselves back in it.”

It was a game to remember for Iowa’s Caitlin Clark, finishing three assists shy of a triple double. Clark, who led NCAA Division I in scoring a year ago as a freshman, finished with a statline of 25 points, 12 rebounds and seven assists.

This was career win number 798 for Iowa head coach Lisa Bluder. Bluder is a graduate of UNI where she was a three-year starter on the women’s basketball team.

With the loss, the Panthers fall to 1-1 on the young season. They will be back in action on Wednesday, traveling to Fargo for a matchup with the North Dakota State Bison.