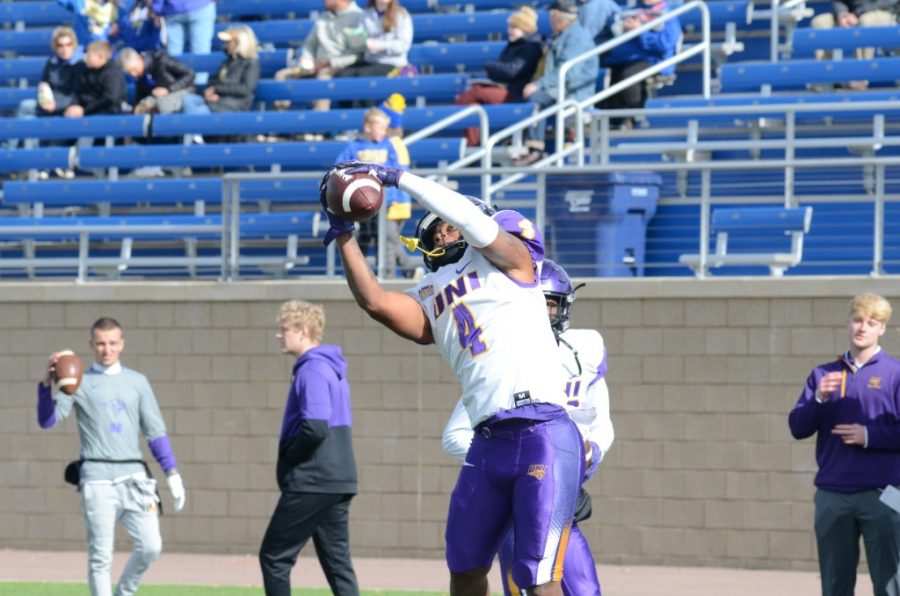 The Panthers lost their second-consecutive road game this past weekend, falling to Missouri State in Springfield. After trailing by two touchdowns late in the game, UNI came back to tie the score at 27, before give up a touchdown in the final minute to fall 34-27.

The UNI football team continued their road stretch, taking on Missouri State in Springfield, Mo. last Saturday, Nov. 13. The Panthers entered their game with Missouri State with an interesting resume. They had knocked off three teams currently ranked in the top-25 FCS Coaches Poll. However, they had also lost to two other top-25 FCS teams and were coming off an upset loss to Illinois State. UNI’s record of 5-4 was deceiving considering their strength of schedule. Missouri State entered with a 6-3 record with some big wins of their own, as well as an upset loss earlier in the season. This game was huge for both teams, as the loser was not likely to make the FCS Playoffs.

UNI got the ball first, but an early interception set up a Bears’ field goal. UNI added a Matthew Cook field goal later in the first quarter to knot the game up at three. Another field goal for Missouri State just before the end of the first quarter gave them a 6-3 lead. After a UNI seven-play drive that ended in another Cook field goal, MSU went on a lengthy drive of 13 plays that took over seven and a half minutes that ended in the Bears’ first touchdown to give them a 13-6 advantage. UNI was driving late into the half, but Theo Day’s second interception kept them from scoring, leaving the Bears in front by seven.

To begin the second half, Missouri State went down the field quickly, including two big pass plays by Jason Shelley. Shelley ran the ball in for a short touchdown run as the Bears went up 20-6. UNI brought the score back within seven with 6:10 to go in the third on a Tyler Hoosman run. The third quarter ended with MSU still up seven at 20-13.

Missouri State drove 80 yards down the field in nine plays and scored on another Shelley touchdown run to go back up 13 at 27-13. After an empty UNI drive, the Panther defense stepped up and forced a Missouri State punt, turning it into seven on a pass to Deion McShane from Day to make the score 27-20. The UNI special teams stepped up by blocking an MSU punt. In less than two minutes, they turned the excellent field possession into seven more points to tie the game up at 27-27 on another Day pass to McShane. Missouri State got it back with a little over two minutes to work with. The Bears converted on third and six to get to the MSU 45. Then, Shelley found Naveon Mitchell for a 55-yard catch-and-run touchdown with 58 seconds to go in the game to go up 34-27. UNI had a chance to tie in the final minute, but ultimately turned it over on downs to lose 34-27.

“Players are making plays. It’s not easy to fill these voids every week and put yourself in a chance to win in this league. We did that and didn’t get the result we wanted,” Panthers coach Mark Farley said after the game.