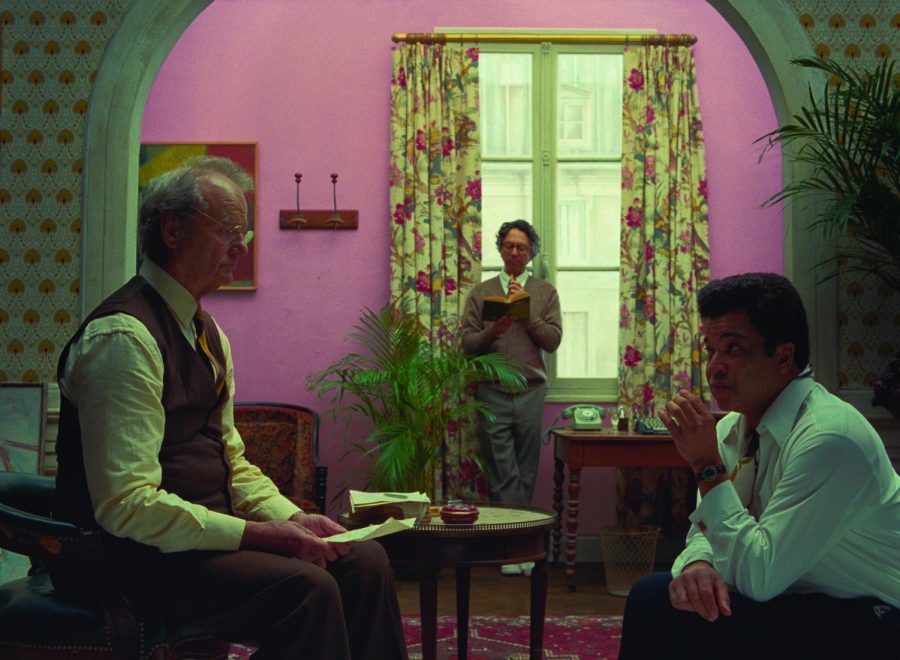 With each subsequent entry into his distinct filmography, Wes Anderson seems to make it a mission to make the most Wes Anderson film. The intricacies of 2001’s “The Royal Tenenbaums” seemed quaint around the time “The Grand Budapest Hotel” was released in 2013. Even his side ventures into stop-motion animation contain a great distance in production quality between 2009’s “Fantastic Mr. Fox” and 2018’s “Isle of Dogs.” With Anderson’s tenth feature film, “The French Dispatch” towers over all of his previous works with its masterful production qualities and international ensemble cast.

Set within 20th century France in the fictional city of Ennui-sur-Blasé, “The French Dispatch” opens with the untimely news that the editor of the titular magazine, Arthur Howitzer Jr. (Bill Murray), son of the magazine’s founder and holder of a supreme eye for talent, has died. As per his wishes, his life is to be tied directly to that of the magazine, meaning that the publication dies with him. His team of writers – an eccentric bunch of expatriates all recruited over the years by Howitzer in one way or another – are granted one final issue, which they decide will contain “an obituary, a brief travel guide, and three feature stories.”

The obituary is, of course, for Arthur, while the travel guide takes one through the historic village that has acted as the publication’s home for nearly half a century. The three retrospective stories selected are considered to be the best in the publication’s long history: an account by the paper’s art critic (Tilda Swinton) of the deranged painter Moses Rosenthal (Benicio Del Toro) and a brash art dealer (Adrien Brody); an on-the-ground report by political correspondent Lucinda Krementz (Frances McDormand) of the student revolution led by the charismatic Zeffirelli (Timothee Chalamet); and a retelling by food critic Roebuck Wright (Jeffrey Wright) of how he got entangled in a kidnapping involving the son of the chief of police (Matthieu Almaric).

While there is no central story to fully move the film from start to finish, the anthology-style structure still allows Anderson to explore several of the themes found within his previous works, such as human curiosity and the ironic relationship we share with the world and its other characters. The final story of the food critic ranks as the best in terms of what’s on the page, giving Jeffrey Wright a wonderfully complex character who unintentionally learns several valuable lessons about his place in the world.

Some will find that the anthology structure limits the emotional connection one can have to the characters, especially since Anderson has built his career on wonderfully layered characters such as Royal Tenenbaum and M. Gustave. On the contrary, while many of his characters tend to overstay their welcome in a 100-minute narrative, the anthologies force Anderson to be as efficient as possible with character development, creating several sequences of mise-en-scène where the direction tells just as much of the story as the script.

After gradually becoming more confident as a director, Anderson has finally allowed himself to fully unleash his unique brand of filmmaking. Visually, this is one of the most accomplished works ever made as Anderson toys with aspect ratios (very similar to the strategy within “The Grand Budapest Hotel”), color and black & white cinematography, ingeniously hilarious freeze frames, and a period-accurate soundtrack that seems to always be perfectly queued. Ironically, the major complaint I have against the film is that there are dozens of expertly crafted shots that come and go in mere seconds even though they could be dissected for hours. Every frame truly is a painting as several hidden treasures can be found in every nook and cranny. This is a film that demands to be rewatched several times over to soak in every last detail.

There are no weak links within the Robert Altman-sized cast, with players such as Adrien Brody (who seems to only deliver a good performance nowadays when directed by Anderson), Frances McDormand, and Jeffrey Wright. The phrase “there are no small parts, only small actors” doesn’t apply here as people such as Christoph Waltz and Saoirse Ronan are reduced to minuscule cameos. Still, Henry Winkler and Willem Dafoe are able to do a lot with the little that they are given.

A visual masterpiece bursting at the seams with talent both on and off the screen, “The French Dispatch” is a film by a director working at the absolute height of his powers. I worry about how Anderson will be able to top this with his next film. But until then, I’ll stay in the present and be thankful that something this magical is allowed to exist in a world that only seems to get bleaker.