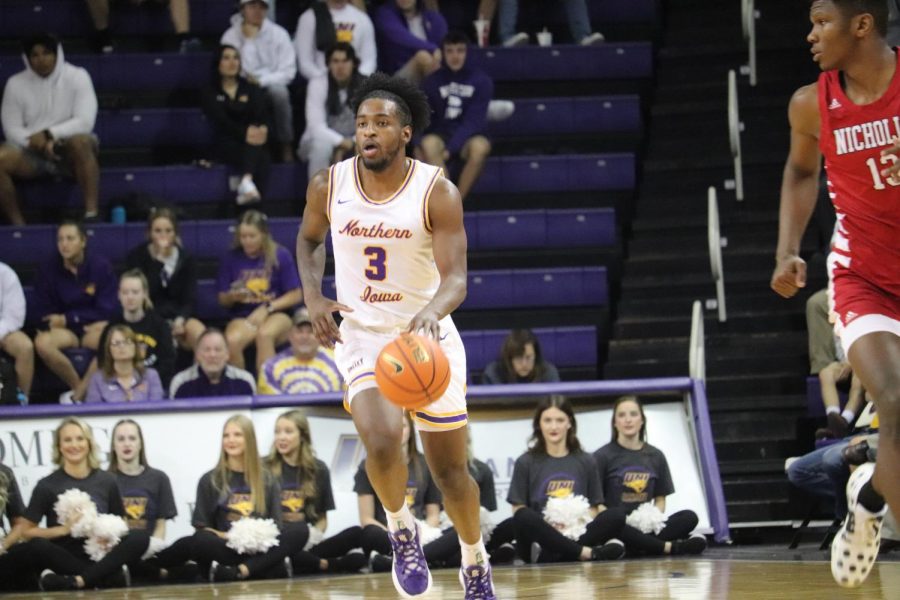 UNI picked up their first win of the season with a 95-58 route of the Dubuque Spartans. Their next home game will be Dec. 5 against Richmond.

After dropping their first two games of the season, the UNI Panther basketball team was able to get their first notch in the winning column as they dominated the Spartans from Dubuque University, 95-58.

It was all Panthers all the time as they opened the scoring with a Tywhon Pickford layup 1:25 into the game. The Panthers never looked back from there, as they led the game for 38:42 out of the possible 40 minutes. Throughout the first half, the team shot 19-28 from the field, including eight three-pointers. Their efficiency right out of the gate was in stark contrast to Dubuque, who could only convert three out of their 20 three-point attempts. By the time the buzzer signified halftime, the Panthers had amassed a 26 point lead with the score at 49-23.

Despite that huge lead, the team never took their foot off the pedal, totaling nearly the same amount of points in the second half. And they were still able to do it with the same level of high efficiency. Another 19 shots were scored, six from behind the arc. Dubuque was able to put up 35 points, but it was too little too late.

The commanding lead allowed for UNI to dip into their bench and spread the wealth. Every player on the team got at least six minutes of play, with sophomore guard Noah Carter leading the scoring with 20 points. Carter also led the team in rebounds with seven, with Trae Berhow and Tytan Anderson right behind him with five each. Four other Panthers were able to score in the double-digits, with the highlight being freshman forward Drew Daniel getting ten points and three assists in only ten minutes of action.

Freshman Bowen Born got his first taste of gameplay this season after being sidelined with an injury. He was able to convert both of his field-goal attempts and dish out three assists. A.J. Green is still working his way back to his usual productivity after last season’s injury. He was only able to tally five points on six attempts but did have four assists.

This gaudy victory was just what the Panthers needed as they look to get into peak fighting shape before the Missouri Valley Conference-only portion of their schedule. They’ll have plenty of opportunities until then, the first of which will be against the Razorbacks of Arkansas on Wednesday, Nov. 17. Arkansas made last year’s Elite Eight of the NCAA Tournament and will come into the matchup ranked No. 16 in the nation, proving to be a tough challenge for the Panthers. They will then face another top-25 opponent on the road in Olean, N.Y. on Saturday, Nov. 27 against Saint Bonaventure, before returning home to the McLeod Center on Dec. 5 against the University of Richmond.