UNI falls 19-9 in FCS playoff first round to EWU 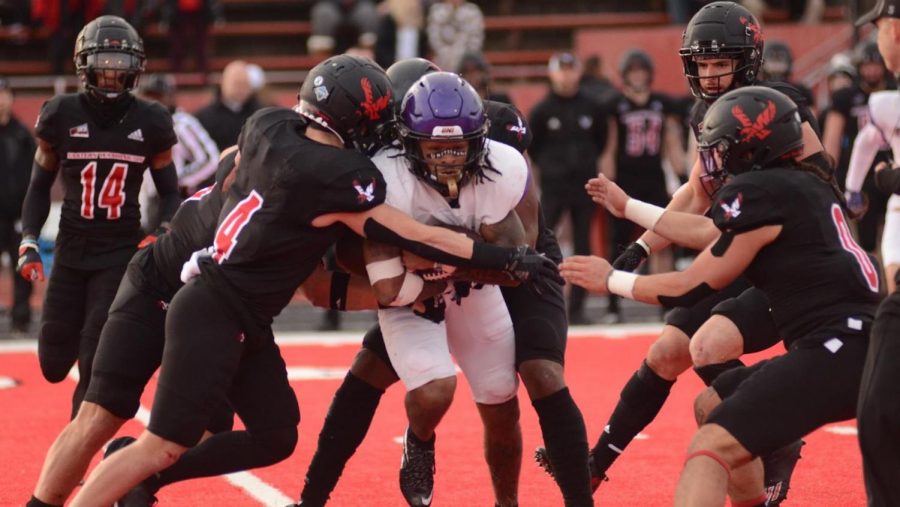 UNI played in their 21st FCS playoff experience last Saturday in Cheney, Wash. Following an up-and-down regular season, the Panther snuck into the playoffs only to see their title hopes stifled by a stout Eastern Washington team.

The UNI football team faced the Eastern Washington Eagles in the first round of the FCS playoffs on Saturday, November 27. Montana awaits the winner Saturday, December 4. This was UNI’s 22nd FCS playoff appearance, which is second only to Montana. Eastern Washington came into the game with a 9-2 record after tying for third in the Big Sky conference standings. UNI came in with a 6-5 record after tying for sixth in the MVC, which sent an FCS-leading six teams to the FCS playoffs this year. Eastern Washington entered with a potent offense averaging about 46.5 points per game and over 560 yards per game, including almost 400 passing yards. UNI came in after finishing in the top twenty in many defensive statistics. The matchup implied a definite clash in style.

Early in the second quarter, EWU tacked on a field goal to go up 9-0. UNI stopped EWU on fourth-and-two on their next drive, then moved quickly down the field. Theo Day found Schnee for a 14-yard touchdown pass, and UNI cut the lead to two at 9-7 to end the first half.

The second half opened with continued strong defensive performances from each team. A Day injury suffered in the second quarter prompted Mark Farley to go with Matt Morrissey at quarterback after a Day interception midway through the third. The next score did not occur until the 7:47 mark of the third when Barriere shook off a Panther tackler and scampered into the end zone for an 18-yard run to extend the lead to 16-7. Punts for each team followed, and the third quarter ended with EWU still up 16-7.

The Eagles added a field goal early in the fourth to go up 19-7. The EWU defense continued to stop UNI, including another goal line stop. UNI did force a safety to cut the lead to ten at 19-9, but could not add any more points as a late Morrissey interception sealed the game for EWU, who will face Montana in the second round.

“We were down on the 3-yard line and 1-yard line three times. The first one, you’re on the 1-yard line with four downs to get it in. Get it in,” Farley said. “We knew we could stop them. We felt good about stopping them, keeping it a low-scoring game. As long as you keep them under 20, you should win. But we didn’t perform on offense, and they did a good job on defense.”

The Panther defense limited the Eagles to only 412 yards of offense and19 points. Day finished with 189 yards passing, a touchdown, and an interception before being replaced by Morrissey, who produced 126 yards and two interceptions. Bradrick Shaw led UNI in rushing with 51 yards. Schnee finished with a season-high 8 receptions for 118 yards and a touchdown to lead the receiving corps. UNI ends the season with a 6-6 record.

Besides UNI’s loss to Eastern Washington, four other MVC teams played on Saturday. South Dakota State faced UC Davis and had no trouble, grabbing a 56-24 win to move on to face Sacramento State in the second round. Missouri State fell by one to Tennessee-Martin 32-31 after a pair of late interceptions and a turnover on downs kept MSU from scoring. UT Martin faces Montana State in the second round. Another first-round game featured two MVC teams going head-to-head as Southern Illinois took on South Dakota. Southern Illinois led by as many as 13 before South Dakota cut the lead to six. SIU added a touchdown in the fourth to pull out the 22-10 win and will face North Dakota State in the next round.

Other FCS playoff games included a dominant 48-21 win by Kennesaw State over Davidson and an overtime 35-28 win by Incarnate Word over Stephen F. Austin. Kennesaw State will move on to face East Tennessee State and Incarnate Word will face Sam Houston State in the next round. Holy Cross came back against Sacred Heart by scoring ten points in the fourth quarter to pick up a 13-10 win and a second-round matchup with Villanova. In the final game of the day, Florida A&M, which was the first team from the SWAC conference to make the FCS playoffs since 1997, got blown out by SE Louisiana 38-14. SE Louisiana will face James Madison in the second round.