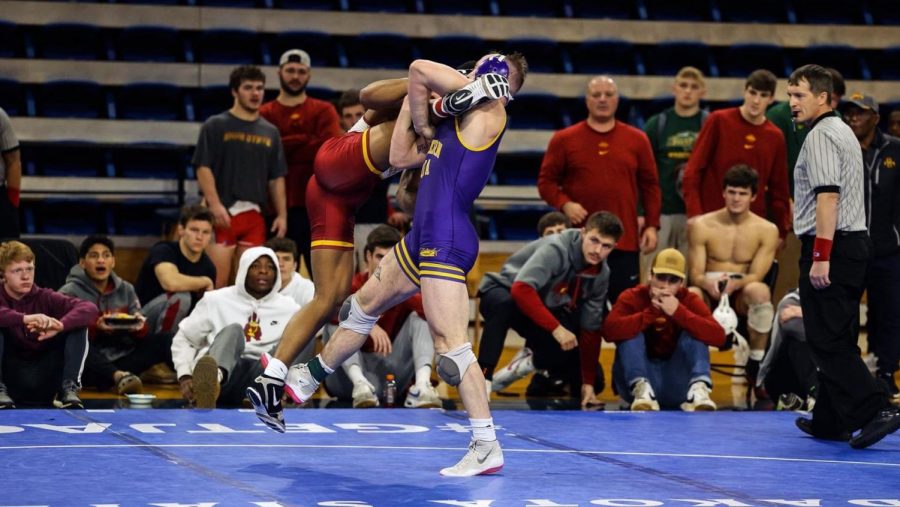 The UNI wrestling team had a solid showing over the weekend at Harold Nichols Cyclone Open in Ames, Iowa. Nine Panthers won in their respective weight classes.

This past Sunday, the UNI wrestling team traveled to Ames to compete in the Harold Nichols Cyclone Open, hosted by Iowa State. It was a very successful day for the Panthers. Of the 26 UNI athletes competing, 23 of them placed on the podium with a finish of at least sixth place, including nine Panthers who won their weight classes.

Parker Keckeisen, the reigning Big 12 champion at 184 lbs, had a great performance, winning the 184 lb competition in dominating fashion. Keckeisen picked up victories over Caleb Orris of South Dakota State by tech fall, 18-2, Ben Lee of Grand View by major decision, 15-6 and Caden Gerlach of California Baptist by major decision, 17-5.

It was also a nice day for Cael Happel, a member of the highly talented Happel wrestling family of Lisbon, as the freshman was the winner at 141 lbs. Happel won all three of his matches by regular decision, defeating Julian Sanchez of Army 7-4, Edison Alanis of California Baptist 12-6 and Thomas Deck of Army 9-7.

Derek Holschlag was also a winner, cruising through four matches to a win at 157 lbs. The junior from La Porte City defeated Derek Anderson, competing unattached, by tech fall, 16-0, Lucas Bratland of Iowa State by fall in 4:14, UNI teammate Evan Yant by regular decision, 9-2 and Nate Lukez of Army by regular decision, 8-6.

Other winners for the Panthers on the day included Julian Farber at 133 lbs, Pat Schoenfelder at 174 lbs and Noah Glaser at 197 lbs. In the freshman/sophomore division, RJ Weston was the winner at 157 lbs, Jared Simma at 174 lbs and Adam Ahrendsen at 197 lbs.

The Panther wrestlers will be back in action this Saturday, Dec. 4, when they travel to Columbia, Mo. for duals against Missouri and Virginia Tech. The home opener for the Panthers will be Saturday, Dec. 11, when they host the UNI Open. Panther fans will have to wait a little while before seeing UNI compete in a dual in the West Gym, as the first home dual will not take place until Friday, Jan. 21, when they host Utah Valley.