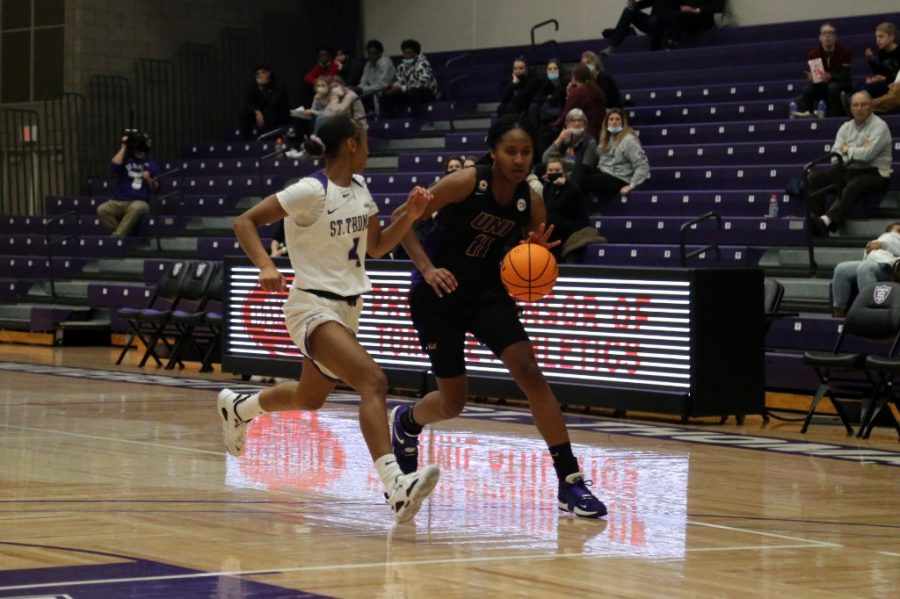 The UNI women have gotten off to a strong start in the 2021-22 season, after picking up two victories last week over St. Thomas and South Dakota State.

The UNI women’s basketball team played St. Thomas on Wednesday, Dec. 1 up in Minnesota for a non-conference matchup. St. Thomas, who is in the first year of a transition from Division III to Division I has struggled so far, coming into the game with a 1-5 record. UNI was coming off a loss to Creighton but still were 3-2 so far on the season. The game was the second of back-to-back road games.

Early in the second, the Panthers scored six quick points to go up by double digits. Just before the end of the half, UNI led 47-30 after another scoring streak. The third quarter saw UNI have an excellent percentage from the field, making every attempt from behind the three-point line while limiting St. Thomas to only nine points the entire quarter. UNI saw more of the same in the fourth, as UNI finished the game to win 102-62.

This was the Panthers’ first win with more than 100 points scored since 1990. UNI shot over 52% from the field and made 16 threes. They had four players score in double figures, led by Emerson Green with 17 points. Maya McDermott led with 10 assists, and Cynthia Wolf picked up 11 rebounds to lead the Panthers.

The Panthers returned home Saturday to take on the South Dakota State Jackrabbits (SDSU), who came into the game with a 3-5 record. After trading baskets for much of the second quarter, SDSU pulled ahead. UNI did not make any threes in the first half for the first time since 2018, but stayed within six as the Jackrabbits led 30-24 at the end of the first half. After the Jackrabbits got out to a double-digit lead early in the third, UNI slowly brought it back and got it within three. The third quarter ended with SDSU still clinging to a 41-38 lead. The Panthers jumped in front and got the lead early in the fourth, but SDSU took the lead back and held it until the last three minutes. UNI regained the lead and shot five of eight from the free throw line to hold on for a 59-50 win.

Both teams struggled to score throughout the game, but four Panthers still scored in double figures, led by Kam Finley, who posted 13 points. Wolf nearly had a double-double as she scored 10 points to go along with eight rebounds. UNI made up for their shooting struggles by winning the turnover battle 18 to 15, including getting nine steals to SDSU’s four.

UNI stays at home for their next game against Graceland on Monday, Dec. 6, before going on the road to play Iowa State in Ames on Sunday, Dec. 12.