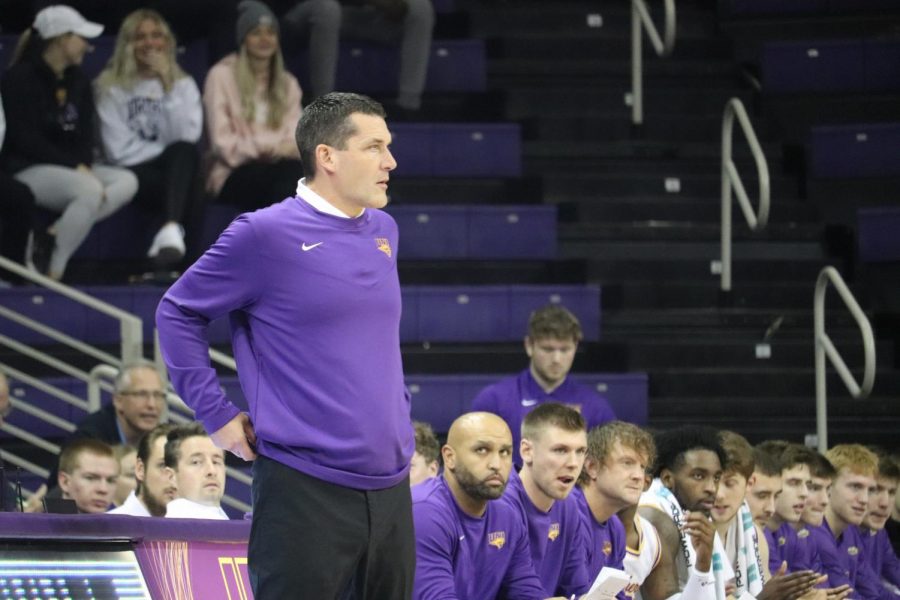 The Panthers saw their comeback against Bradley fall short on Wednesday night, as a last-second layup by the Braves' Terry Roberts sealed the win 72-69.

Coming off of a big upset victory over 16th-ranked St. Bonaventure, the UNI men’s basketball team was back in action on Wednesday, playing their first Missouri Valley Conference game of the season against the Bradley Braves at Carver Arena in Peoria, Ill. The Panthers entered with a record of 2-3 on the season, while the Braves came in 2-5. Despite a valiant effort to erase a double-digit second half deficit, the Panthers gave up a layup with just seconds remaining in the game, falling by a final score of 71-69.

The Panthers got off to a good start when AJ Green knocked down a three-pointer on the opening possession of the game. However, despite holding a lead for most of what was a fairly low scoring first half, the Panthers could never pull away. The Braves did just that when they went on a 13-0 run late in the first half. This put the Panthers into an 11 point hole going into the halftime break, trailing 39-28.

It initially looked like the second half would be more of the same until 10 quick points from Green, as well as a three-pointer from Nate Heise, got UNI back within three points, trailing 44-41. Although they did tie the game once, the margin stayed right around three points until the closing minutes of the game. Trailing by five, Green hit a clutch three to get within two, and 90 seconds later hit a difficult fall away jumper to tie the game at 69 with 12 seconds to play.

Needing a bucket to avoid overtime, the Braves got exactly that when Terry Roberts drove past a pair of defenders and put in a layup with four seconds remaining. A desperation heave from Green was off the mark, and the Panthers fell, 71-69.

It was another standout performance for Green who has come on strong as of late after missing almost all of last year with an injury. The Cedar Falls native finished with 30 points and knocked down five three-pointers. Noah Carter also had a nice day, coming off of the bench to put up 20 points. Trae Berhow pulled down a team-high six rebounds, while Cole Henry dished out a team-leading four assists.

Roberts was the leading scorer for the Braves, finishing with 20 points as well as the game winner.

With the loss, the Panthers fall to 2-4 on the season. They will be back in action on Sunday, Dec. 5, when they host Richmond. They will then have two more games, at home against Jackson State and on the road against Marshall, before traveling to Hawaii to participate in the Diamond Head Classic. Their first round opponent will be Liberty, and that game is scheduled for 2 p.m. on Wednesday, Dec. 22.