Men’s Glee Club back on stage 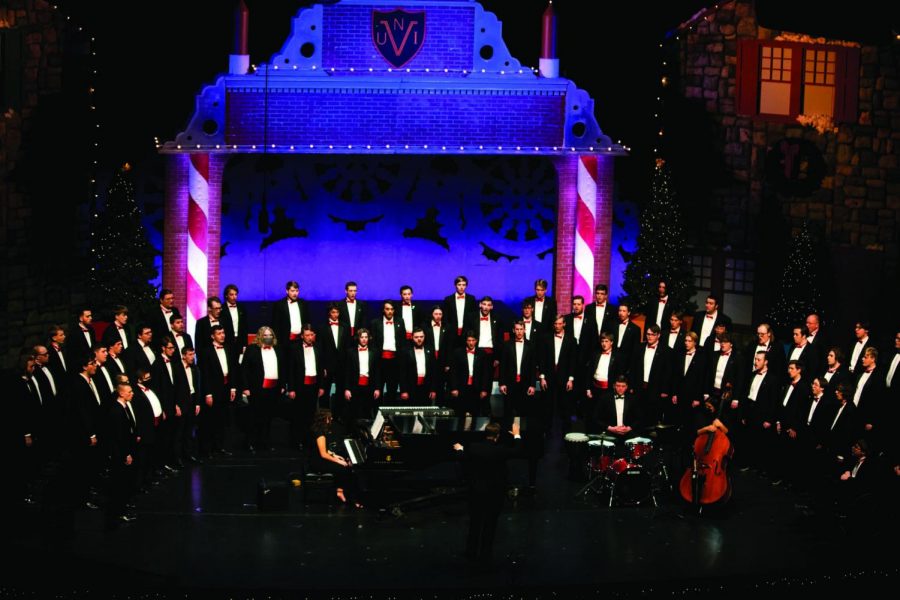 After nearly two years, the Glee Club is back and more enthusiastic than ever. They performed their 44th Annual Christmas Variety Show in the Gallagher Bluedorn Performing Art Center on Dec. 3 and 4. As one of UNI’s most anticipated events, the Christmas Variety Show “is filled with everything from the sublime to the ridiculous,” Glee Club director John Len Wiles wrote in the program.

Even before the show began, the atmosphere was set by the chattering of people, the glow of lights from the onstage holiday decorations and the sound of Glee Club’s favorite organist, Father Paul Peters. Father Paul Peters is from Prairie du Chien, Wis. He has been accompanying the Glee Club on the organ for every Variety Show except for one.

The Glee Club members startled the audience when they hooted and hollered while quickly filing down the aisle and onto the stage. The energy carried into the first piece, “We Need a Little Christmas” which has been performed along with “Lo, How a Rose ‘Ere Blooming” and “The First Noel” on every Christmas Variety Show since 1978.

Halfway through the first act, the Glee Club’s auditioned a cappella group named The SingPins performed their powerful student-written arrangement of Charlie Puth’s “Attention”. They later returned in the second half of the show to perform their rendition of “When the Party’s Over” by Billie Eilish.

As part of the show, UNI’s Dr. Steve Koh was featured as the violinist during the Glee Club’s rendition of “Winter” by Vivaldi. This classical piece was contrasted by the following song “The Secret Santa Song (My Type)”. This piece took the audience on an interesting journey, which the “temporary” emcee of 18 years and alumnus Paul Marlow joked as being almost “psychedelic”. Groovy lights shadowed the members, and people rushed onstage to accompany the members during this song wearing superhero outfits, duck costumes and Christmas present boxes.

Then, the Orchesis Dance Company quite literally dazzled the audience with its “A Marshmallow World” routine. This was followed by this year’s play “Squid Games: The Return of Tiger King” written, directed and performed by some of the Glee Club’s very own members. This play included characters such as Kermit the Frog, Mickey Mouse, Shaggy and Scooby-Doo, Batman and many others. This crew of characters was faced with a crisis after they found out that the Tiger King had stolen all the Christmas spirit. In order to get the Christmas spirit back, they had to compete in the challenges from Netflix’s popular show Squid Games and beat the Tiger King. The whole play was brought to life by the Glee Club member’s impressive voice impressions and hilarious jokes that had the audience laughing and clapping.

Santa Claus also made an appearance at the Christmas Variety Show. Santa and Marlow called up children from the audience and asked them what they wanted for Christmas. Although this was the most simple part of the show, the children’s reactions and replies also made it the cutest and most wholesome part.

In between the Glee Club’s performances of “Santa’s Love Song” and “Ave Maria”, UNITUBA, one of the oldest tuba and euphonium ensembles in the world, performed “You’re a Mean One, Mr. Grinch”. This smooth rendition helped ground the show amidst all the fast-paced chaos.

The Glee Club wrapped up their singing portion with a stunning performance of “White Christmas”. Then, they finished the night off with the “world-renown” Arthur Murder Dancers. This dance troupe has performed on every Christmas Variety Show since 1978 and featured Glee Club members in tutus as they danced to “Dance of The Sugar Plum Fairies” and “Christmas Can Can”. This final act is always a fan-favorite and had the whole audience standing and clapping while singing along to UNI’s Fight Song.

From beginning to end, the atmosphere was buzzing with excitement and perfectly set the mood for the holiday season. Wiles expressed his past concerns in the program about the Glee Club’s future during the pandemic. However, as people exited the performance hall, all that could be heard was joyful praises from the audience and people making plans for next year’s show. It’s safe to say that even if adversity comes their way, the Glee Club will be able to continue to proudly proclaim, “Brothers, Sing On!”