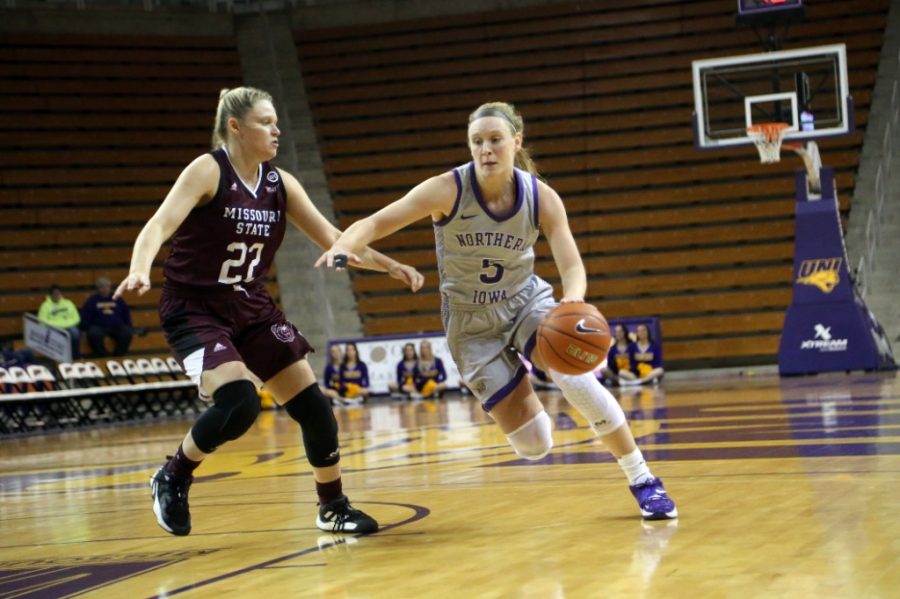 The Panther women's basketball team has played well so far into the season and will look to fight for positioning in MVC play in the second half.

As UNI students return to campus to brave the cold and prepare to take on the spring semester, the men’s and women’s basketball teams at UNI are continuing to face stiff competition on the court. Both teams are now fully entrenched in the grind of Missouri Valley Conference (MVC) play, and both are having their fair share of success.

The men’s basketball team is currently sitting at .500 on the year with a 9-9 record, although they do have a winning record in conference play at 5-3, good for fourth place in the MVC. They have also let several games slip away, having lost three games by two points each as well as another game by four.

Their two most recent contests have both been heartbreakers as they lost to Valparaiso on the road, 83-80 in overtime, and then returned home to drop another overtime contest, this time falling to Drake 82-74 in the extra session. Before those two overtime losses they had been on a major hot streak as winners of five in a row.

Looking at the numbers, the scoring has been very balanced for UNI, with several players emerging as potential number one options on any given night. AJ Green, back from missing all but three games a year ago with hip surgery, is still the undisputed star, averaging 18.3 points per game. However, Noah Carter has also emerged as a scoring threat, averaging 13.9 per night as well as putting up 33 in the overtime loss to Valparaiso. That game was played without Green due to COVID protocols. Nate Heise is also averaging double figures at 10.3 per game.

One key for the Panthers going forward will be the availability of Austin Phyfe. The 6 foot, nine inch junior is battling the side effects of long COVID after an infection this past summer. Because of this, Phyfe is averaging only 15.3 minutes per night and has missed two games. However, he has still been effective, averaging 6.9 points on 55.4% shooting.

Taking a look at the women’s team, they currently have a record of 10-6 while sitting at 3-2 in the MVC, good for fifth place. They lost their most recent game at Drake, 65-57, but had been on a three game winning streak before that to help sit at four games above .500.

Karli Rucker has led the way in scoring so far this year for the Panthers. The senior point guard is averaging 13.7 points per game. Kam Finley is close behind as the Cedar Falls native is averaging 11.5 points per night. The Panthers have a very well balanced scoring attack with six players averaging at least seven points. Grace Boffeli has been very impressive on the glass, pulling down 8.6 rebounds per night, while Rucker averages a team-high 3.5 assists.

Looking ahead, the men have 10 games and the women have 12 before they compete in their respective MVC Tournaments. This will take place in St. Louis for the men and Moline, Ill. for the women. The men will be on the road against Evansville this coming Wednesday, Jan. 26, before returning to the McLeod Center to host Illinois State on Sunday, Jan. 29. The women will have road games at Illinois State and Bradley before returning home on Wednesday, Feb. 2 to host Indiana State.