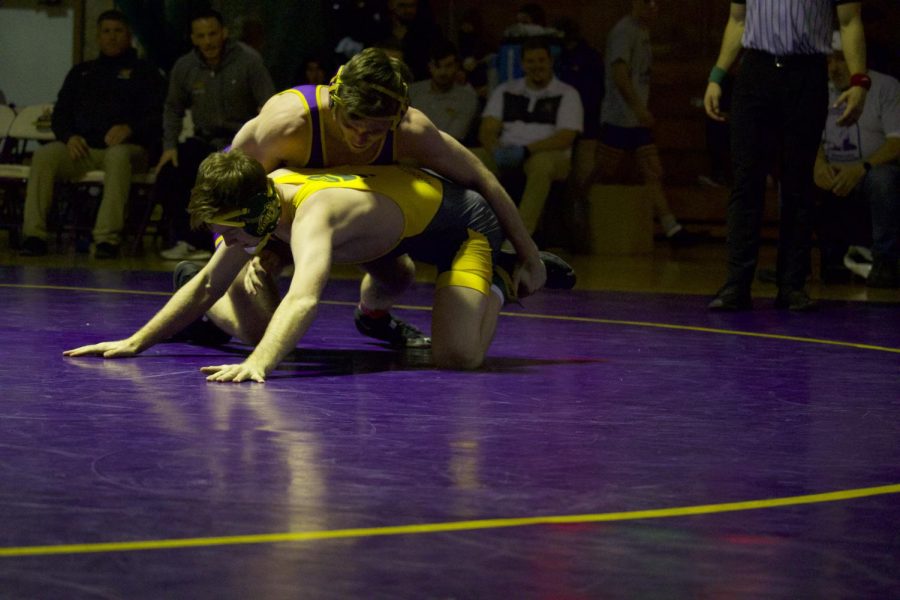 The UNI wrestlers continued their winning ways, earning their fourth straight dual win with their 17-15 defeat of Oklahoma last Sunday.

Less than 24 hours after shocking the third-ranked and previously unbeaten Oklahoma State Cowboys, the UNI Panthers wrestling team was right back at it. Staying in the state of Oklahoma, they took on the Oklahoma Sooners at McCasland Field House in Norman on Sunday, Jan. 30. Keeping up the momentum they had picked up the night before, UNI took down the 21st-ranked Sooners for another top-25 victory, winning by a final of 17-15.

Kyle Biscoglia got the ball rolling for UNI at 133 lbs, defeating Tony Madrigal by a 4-0 decision to tie the dual at 3-3. Cael Happel kept it going for the Panthers at 141 lbs, dominating Oklahoma’s Zack Zeamer en route to a 14-5 major decision victory, giving UNI a 7-3 advantage.

After a loss at 149 lbs, UNI bounced back for two more match wins. In the 157 lb weight class, Derek Holschlag continued his strong season by picking up a 10-2 major decision victory, while Austin Yant was able to pick up a decision victory, shutting out Joe Grello to win 3-0. These victories gave the Panthers a 14-6 advantage with four matches to go.

After a 9-6 decision loss from Lance Runyon at 174 lbs, UNI’s Parker Keckeisen competed at 184 lbs. Keckeisen has had quite the season, coming in as the fourth-ranked wrestler in the nation at that weight and with only two losses on the year, both coming against the nation’s top ranked wrestler at 184, Aaron Brooks of Penn State. This matchup was surprisingly close, with Oklahoma’s Keegan Moore able to keep it competitive, but it was still a victory for Keckeisen, 7-5.

The Panthers dropped their final two matches by decision, but still hung on to win the dual by a final of 17-15.

With the victory the Panthers improve to 5-5 on the season and have won their last four duals in a row. They will finish the regular season with four straight duals in Cedar Falls. This weekend they will take on Air Force on Friday and West Virginia on Saturday, with both of those matchups taking place in the West Gym. They will then move over to the McLeod Center to face off with in-state rival Iowa State on Friday, Feb. 11, as well as Wisconsin on Thursday, Feb. 17.