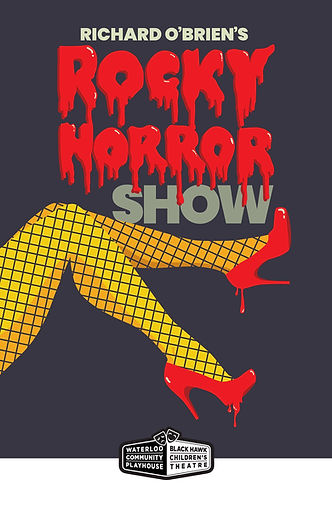 Come do the Time Warp and watch Brad and Janet explore Frank-N-Furter’s mansion at the Waterloo Community Playhouse’s upcoming production of the Rocky Horror Show. The cult classic will be shown Friday, Feb. 25 through Sunday, Feb. 27, and then on Thursday, March 3 through Sunday, March 6, with a ticket price of $25.

Many individuals in the cast and crew have connections to UNI. This includes math professor Doug Shaw, who watched the show when he was young. “In the back of my mind I always thought I would love to be part of this,” Shaw said, who created and directed UNI’s previous improv troupe, Half-Masted, for 12 years. Although he has improv and performing experience, Shaw says he’s never been involved with a production at this level, and “was surprised at how kind and nice and supportive the whole cast is.” Shaw will be the narrator for Rocky Horror, joking that it’s because he can’t dance.

Sophomore Theatre Performance major Madison Pulica is the show’s Janet Weiss. She, like Shaw, also talks about how great the cast and crew have been to work with. “I love both the cast and crew of this production; everyone is so filled with acceptance and love.”

Pulica mentioned that the other actors have been supportive and respectful of her boundaries as well, since she has “never dealt with a role who has an arc of sexuality,” but that the cast and crew have made it a positive experience. Pulica also stresses the importance of the show. “I love everyone’s enthusiasm and love for the show; you can see how impactful this show has been to some of these people, it’s amazing.”

The show originally debuted as a stage production in 1973 to widespread critique and was adapted as a movie two years later. Over the years Rocky Horror has gained a cult appreciation and many traditions along with it. Around Halloween, many theatres will show the movie with actors on stage mimicking the action on the screen. Audience participation is a huge part of the live show, with some venues handing out bags of popcorn and toast to throw, and birthday hats to don when Rocky is born. You can find scripts online detailing the lines audience members shout back at the movie, including “let there be lips!” at the beginning and “what’s your favorite color?” every time the character Magenta is on screen.