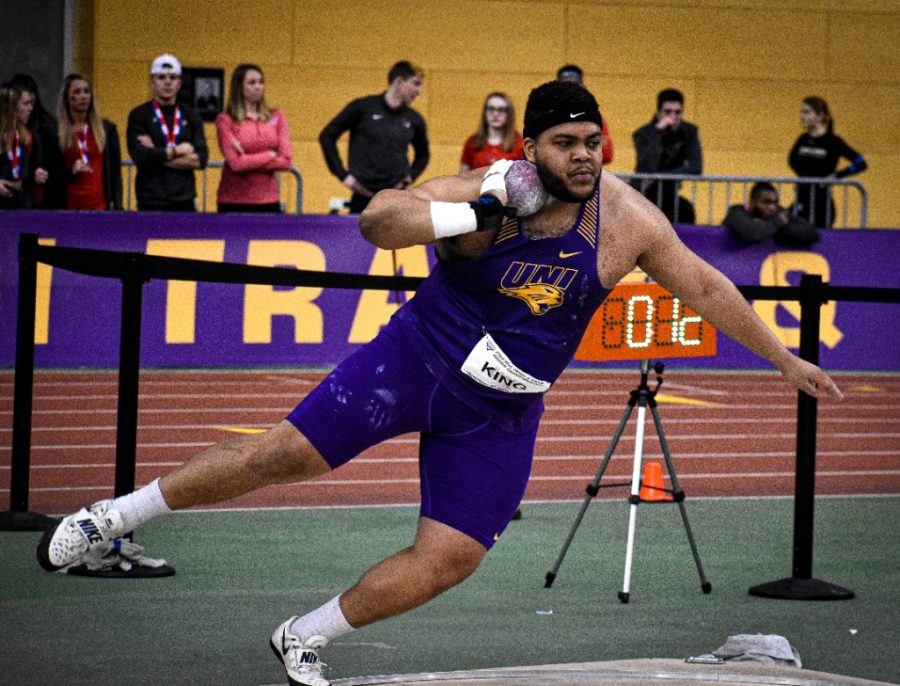 This past Sunday and Monday, the UNI men’s and women’s track and field teams traveled to the Track and Field Center at Gately Park in Chicago, Ill. to compete in the 2022 Missouri Valley Conference Indoor Track and Field Championships. This is a new facility for the event after spending several years inside the UNI-Dome. Individually, many Panthers found success, with a total of 13 athletes claiming all-conference honors for finishing in the top three of their events, including four champions and two broken records. As a team, both finished in the top half of the conference, with the women scoring 64 points to take fifth place, while the men put up 123 points, good for third.

It was a great event for senior sprinter Isaiah Trousil as he earned the Most Outstanding Male Athlete award for his performance. In the 200 meter dash, Trousil ran a blistering 20.72 seconds. This not only won the event, but broke the meet, facility, and school records. Trousil is the first Panther to ever run the event in under 21 seconds. It also put Trousil in 12th place nationally, automatically qualifying him for the NCAA Division I Championships. Trousil also performed well in the 60 meters, finishing in 6.69 seconds, less than .01 seconds slower than the champion, JaVaughn Moore of Indiana State.

Darius King also put up a record breaking performance, throwing 64 feet, 2.25 inches in the shot put to win the event and break the facility record. This was King’s third consecutive conference championship in the shot put. King was also a podium finisher in the weight throw, taking third with a toss of 63 feet, 11 inches.

The third and final champion for the UNI men was Jack Sumners. The sophomore took home gold in the 60 meter hurdles in a time of 8.06 seconds. His freshman teammate, Drew Bartels, was close behind, taking third in 8.22 seconds. The lone champion for the UNI women was Sophia Jungling. The freshman ran the 800 meters in a time of 2:16.93 to bring home top honors in a tightly contested race.

Next up for the Panthers will be the 2022 NCAA Division I Track and Field Championships at the Birmingham CrossPlex in Birmingham, Ala. Those that qualify will compete on Friday and Saturday, March 11 and 12, and those that don’t will turn their attention towards the outdoor season, set to begin on April 2 in Normal, Ill.