The women who made UNI 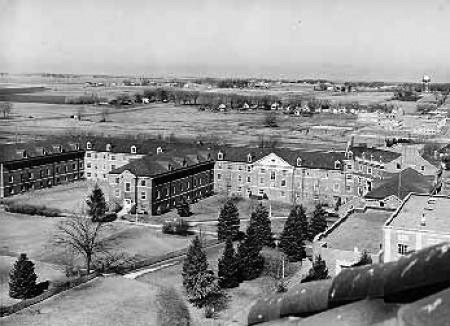 Continuing the Northern Iowan’s coverage of women who contributed to the betterment of UNI’s campus and community through its 146 year history, here are just a handful of women who created a lasting legacy on campus. University Special Collections and Archives were utilized for this article.

Mavis Holmes was the first female Dean of Students at UNI after serving many years as the Associate Dean of Students. She began her career at UNI in 1956 and was involved in numerous organizations including the American Association of University Women and Business and Professional Women. Holmes also served as the chair of the Education Committee of the Governor’s Commission on the Status of Women. An advocate for a woman’s right to education and women’s rights, she was awarded the Outstanding Woman Educator Award by the Torch and Tassel senior women’s honor society at UNI.

Frances Webster is known to be the first female instructor at UNI when the school was opened in 1876. She was listed as a teacher of geography and history and had a salary of $800 per year. Webster was educated in New York, and brought new teaching methods which were more engaging for students. Under her guidance, the first women’s literary society, the Alpha Society, was formed in 1877.

One of UNI’s original faculty, Professor Wright, described her as a, “lady of fine presence and winning matter.”

When the Commons was the social center of campus, alumna Irene Eaton served as the evening hostess where she greeted students, managed property and supervised students. In the late 1930s when the Commons received new furniture, Eaton insisted students not tip the chairs or slouch, which inspired good natured students to give her the nickname “Ma Commons.” Well-loved by UNI students, she became an honorary member of the I-Club for athletic letter-winners and was named “Most Popular Girl” on campus by the Men’s Union. Eaton served as the hostess in the Commons from 1935 until her retirement in 1972.

Maude Gilchrist was the first woman to graduate from UNI. She earned a Bachelor of Didactics degree in 1878, and a Master of Science degree in 1880. She later became a teacher of natural sciences and mathematics on campus from 1883-1886. During her time as a teacher, she organized and led a gymnastics club for women which is considered one of the early attempts at organized women’s sports. Gilchrist is also known as Principal J.C. Gilchrist’s daughter.

Anna Bell Lawther served as the first woman on the Iowa State Board of Education (now called the Regents) from 1921-1941. She was a well known leader of the women’s suffrage movement in Iowa and served as president of the Equal Suffrage Association from 1916-1919. She also became the first woman delegate from Iowa to attend the Democratic National Convention. Locally, she was involved with the American Association of University Women and the League of Women Voters. Lawther Hall was dedicated to her in 1940.