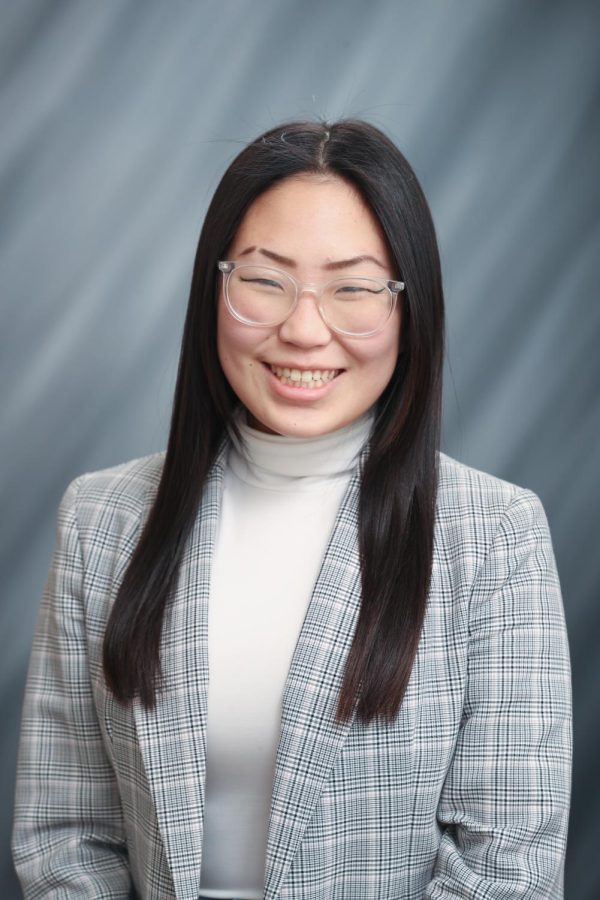 Current UNI student body Vice President, Alisanne Struck, has left her mark on campus as the first Asian American student to serve in NISG as Vice President. Beginning her term in April 2021 with current president Samantha Bennett, Struck has spent the last year dedicating much of her time to UNI students and their voices, as she worked directly with UNI Administrators, local and state officials.

Born in Ulaanbaatar, Mongolia, Struck was adopted by Paul and Darla Struck at 13 months old. Struck grew up in Cherokee, Iowa with her parents and older brother Alex. After graduating from Cherokee High School in 2019, Stuck fell in love with the UNI community and began her journey of higher education with the Panthers.

Struck began her undergraduate degree at UNI in fall 2019, originally a music major, following her love for band in highschool. She quickly changed her major to public relations as she followed her love for social media and creativity.

In honor of Women’s History Month, and to recognize the power women have had in making UNI the institution it is today, the Northern Iowan spoke with Struck about her time at UNI as a student, leader and a woman.

Question: What was your motivation for running NISG Vice President?

“I did orientation in November of my freshman year, and I joined that because I love UNI. Orientation is a good example of making other people love UNI. I think for me that love for UNI also went to love for wanting to make UNI better, which is why I joined student government in the first place as a senator. Because I feel so strongly about and I am so passionate about UNI that I wanted to run for VP and I think (Samantha Bennett) is a really great person that has a great vision for campus.”

Question: Besides NISG, what other things are you involved in on campus?

“My freshman year I was in the Panther Marching Band, and for a portion of my sophomore year, I played trombone. When I got involved in student government was also when I got involved with PRSSA (Public Relations Student Society of America). That fall, in 2020, was when I founded Asian Student Union, which was my other big involvement. Summer Orientation staff and then now I just accepted the VP of Events in PRSSA, and a membership position in CATS (Connecting Alumni to Students).”

Question: What female leaders or role models have you worked with that helped you navigate your time at UNI?

“One person that nurtured my role in being a solid leader has been Elle Boeding (former student body president). Elle was foundational to that from the first day when I got my student ID at orientation, and she had sat down with me and got to know my mom.”

Struck continued, “Just her guidance through joining orientation staff and then her “voluntelling” me to do things when she needed volunteers and that was such a kickstart to my leadership roles in student government and having the confidence to go pursue that in other facets of campus. Some of the other women would be Rachel Greene (former student body VP) really knows what it’s like to be another woman of color especially in NISG, especially with shared governance. Especially going to rooms and being the only woman of color. Rachel really understood that and we were able to bond over that. Those two have been two of the most important women for me when it comes to leadership.”

Question: What does it mean to you to be a woman of color in your position on campus?

“I think a lot of people, especially young women, when you’re the first of anything, there always comes a pressure to do well because everyone knows that you are already set back just because of how you’re perceived. I think in my leadership roles, although I work for DEI, for inclusion to make our campus a more equitable place, I have really tried to, I try not to bring up the fact and tokenize the fact that I am an asian woman because I think sometimes it does do more harm than good. I had to learn that the hard way through trials and tribulations. I am very proud of the way they have shaped me and allowed me to uplift the voices of other women of color.

Question: What do you hope people take from Women’s History Month?

“There’s things that I want different groups of people to always take away from this time. For folks who aren’t in the minority, I want them to understand that you can’t tokenize me, the women  who are in the minority, you should notice them for their work, not because of any of the identities that they hold. When I see other young women of color,  I hope they can see themselves in these positions because when I was little, there weren’t women representatives. I knew Oprah but now kids can watch Hidden Figures and see smart women scientists of color and more.”

Struck continued,  “We are moving at a very slow way but we’re moving and that’s what counts. Similarly, we have Asian-Pacific Islander Month coming up in May, and that is always my hope that people can see when someone says “picture a lawyer,” they don’t just see a white man in a suit, they can invision an Asian woman with slicked backed hair. I just want people to see that potential in international women, like I do.

Question: What do you feel is your biggest accomplishment thus far?

“I’ve been trying to do a lot of reflecting on my term and accomplishments and I think not any particular thing I’ve done in student government, but the fact that students trusted me enough to know that I would make positive changes is the biggest accomplishment of them all. Having students trust and knowing that they do believe in you, has been meaningful to me. I see a lot of potential in how great an institution UNI can be and I think where its power comes from is its students.”