Adieu to the Old Ad 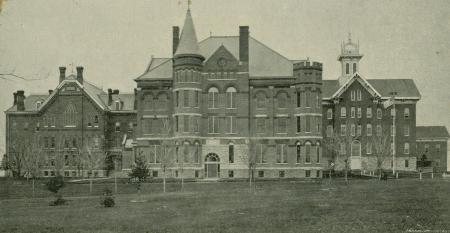 The old ad had fallen into dispair over its 90 year standing. Many student organizations attempted to save the old ad before its demolition in Sept. 7, 1984.

Editor’s Note: This article was originally published April 13, 1984. The Old Ad is the Old Administration Building was built in 1894 and razed in 1984. It was estimated it would take $700,000 to bring the building up to minimal safety standards. This piece is an opinion from Denton Ketels, a student at the time.

Perhaps the next step is to hit up the senior class gift committee. It won’t get enough funds to save Old Ad, but it can donate something that may be of service in producing revenue for this or future causes that come down the pike. May I suggest toll booths on the University sidewalk system. Ten cents to get on, 25 cents to get off.

The majority of students wouldn’t object too loudly or too long to that. Students are, by and large, reasonable and generous people when it comes to the good of the University. Why, just think of all the charitable acts they perform daily. Students give lots of folks good jobs by willfully paying overtime parking fines four times the amount asked by the city. If the lots are full from being oversold, do students get mad? Don’t be foolish, they are glad to buoy their future alma mater’s Security Fund by contributing twice what Cedar Falls get for ‘illegal’ parking. Student may look dumb but they comprehend the for public relief, and the economic logic behind why the entire west side of the campus should have one row of two-hour meters for hundreds of people with three-hour night classes.

In all fairness, it should be noted that students don’t drop all of their goodwill in one bucket. If they see books they sold back in perfect condition for $5 sitting on the shelf selling for $12.95, they don’t bat an eye. They just stroll over the Union, sit down over a few thousand cups of 38-cent coffee and talk about the needy people in the world – like the Board of Regents.

If those people say they need a double-digit tuition increase and a room and board increase in the same year, then it must be so. Besides, those measures will ensure that our bankers’ sons and daughters get a chance to go to college, I overheard some students say the other day.

And, with faculty salaries being what they are, it’s touching to see students supporting professors’ video games and word-processing scams… er, I mean, ventures.

Clearly, the problem with the Old Ad is the mechanism for extracting… er, um the initiative for making… donations. A word of warning however – one shouldn’t go around thinking that students are just a bunch of unsuspecting dupes who are in a position to be taken advantage of. God knows how they might react if they were aware of this perception. It would take a good faith administrative compromise to get students to see the worth of the proposed toll system. For example, on Fridays a $5 change of registration slip could be worth one free access to campus from family housing.

In the meantime, I think someone should give student philanthropists credit for what theyre already doing. And to the students themselves, I say, “Keep up the spirit, future alumni!” Dig a little deeper to help out your university community and do it with a song in your heart… Every time it rains, it rains, pennies from students…