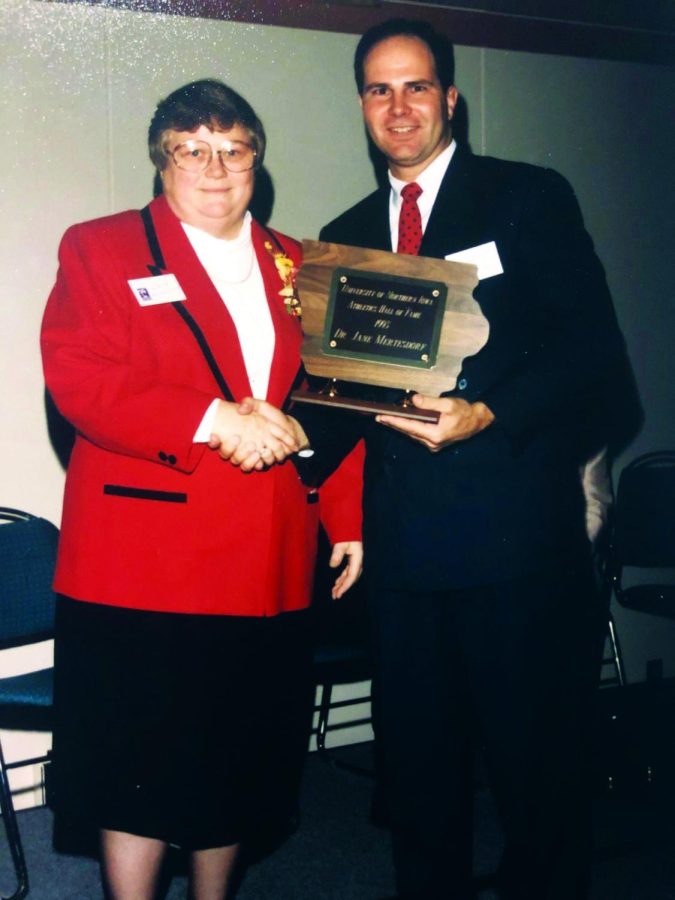 Jane Mertesdorf founded UNI's first softball program in 1970. Her teams went on to win numerous state titles and a national title in 1977.

Two years before Title IX was passed prohibiting sex-based discrimination in schools, UNI Athletics Hall of Famer Jane Mertesdorf created UNI’s first softball program. She proceeded to lead the Panthers to numerous state championships and a national championship in 1978 despite lack of funding or resources.

“We started with very humble beginnings… without a budget,” Mertesdorf said. “My social life was pretty much done. We did everything. We had no field, so we went where it was dry enough, had grass, open space and we weren’t going to take out windows of buildings. We didn’t complain. We just did it.”

The team used equipment from intramural sports, and drove station wagons to and from games since team buses and drivers were not supplied.

“Those drives we had in the station wagons were some of the most eye opening and wonderful times because that’s when you start to know people,” Mertesdorf said.

Mertesdorf remembered the students and their passion for athletics fondly.

“Students were the ones who created the interest in women’s intercollegiate athletics. Female students who had participated in high school sports were beginning to say ‘we need more than intramural sports on campus.’”

She continued, “Everything about how things developed was the students. The students were all highly motivated and highly talented. I was just the team’s facilitator. As a coach I loved the practices, I loved the games, and I loved working with the students.”

In addition to initial low funding, the early softball program faced other obstacles. According to Mertesdorf, the female athletes did not have an athletic training room and the women were not welcomed in the existing training facilities.

Additionally, the coach was responsible for taking care of any injuries their players sustained.

“It took 2-3 years before there was a change in athletic training here on campus and women were welcomed,” Mertesdorf added. “We were in a male dominated field, so we’ve always had to fight for what we believed was right.”

Despite these setbacks, her teams won three Iowa Association of Intercollegiate Athletic for Women (AIAW) state titles, along with the AIAW Region 6 Championship in 1977. She also led the Panther women to the Women’s College World Series four separate times in 1973, 1975, 1976, and 1977, including the 1977 National Title.

As the softball program began to gain attention from the media, Mertesdorf knew her time had come to pass the baton to another to keep the program’s momentum going.

“When we started winning and the news media started to come around wanting interviews and everything, I as a coach knew that was not me. That wasn’t my personality to be out there in the public,” Mertesdorf said. “I really enjoyed those years I was coaching. It was good timing to pass it on.”

Over the years Mertesdorf has witnessed women’s collegiate athletics evolve and grow since its humble beginnings.

“You feel renewed knowing you were at the start of it knowing it has grown in positive ways,” Mertesdorf said.

“Softball is just one little branch of how women can grow, succeed and contribute beyond. They can become great participants in the community. The women are out there, they just need to have that avenue. For me it happened to be softball.”