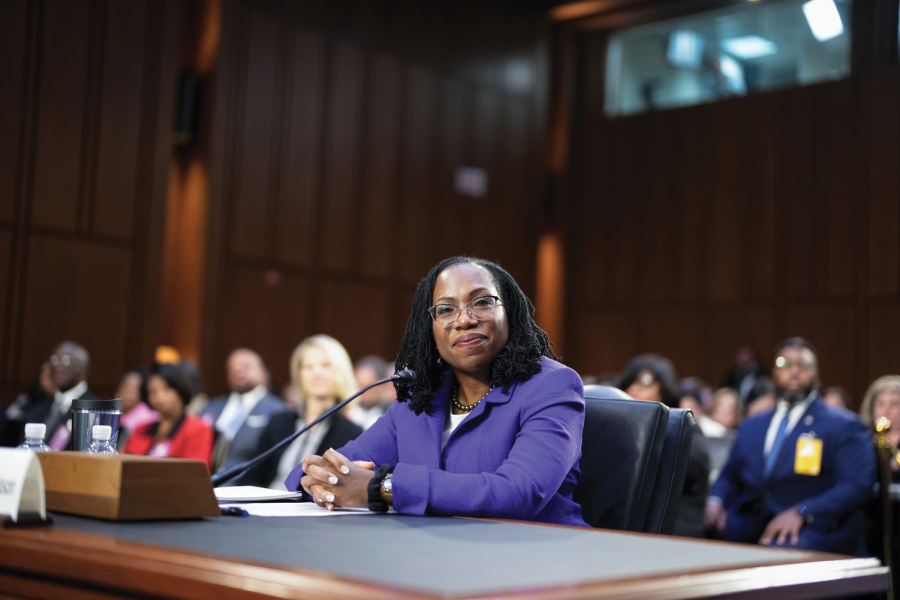 Judge Kentanji Brown Jackson, if continued, will be the first Black women to ever sit in the history of the Supreme court.

On Feb. 25, 2022, President Joe Biden nominated Judge Ketanji Brown Jackson to the bench of the Supreme Court, meant to fill Justice Breyer’s seat upon his announcement of retirement. After her nomination, a Senate hearing was held to deliberate her qualifications and why she would be a good addition to the Supreme Court. But, as the first Black woman to be nominated, her hearings were turned into an attempt to butcher her achievements and intelligence.

Jackson attended Harvard University for both her undergraduate degree and her Juris Doctor. Upon her graduation, Jackson clerked for two other judges in the U.S District Court and the U.S Court of Appeals from 1996 to 1998, and she maintained a clerkship for Justice Breyer from 1999 to 2000. After her clerkship, she worked in private practice in Boston, Mass. for three years. She served multiple assistantships alongside that, from assistant special counsel to assistant public defender. After this, she served as a trial court judge for eight years. In 2013, she was sworn in by Justice Breyer to the District Court of Appeals for the District of Columbia. Within her time serving on the District Court of Appeals, Judge Jackson wrote decisions defending Americans’ rights to know where their food comes from and defended the Americans with Disabilities Act. In 2021, President Biden nominated her to the U.S. Court of Appeals, and she was confirmed in the Senate with a vote of 53-44.

Jackson’s first day of hearings began on March 21, 2022. From the opening of the hearings, Republican senators made it known that her time in the Senate hearings would not be easy. Senator Lindsey Graham (S.C.) commented that Jackson would not receive the “same treatment” that Justice Kavanaugh did, referencing the investigation into his sexual assualt allegations. Tuesday, March 22, was much more difficult, with Senators Cruz (Texas), Cornyn (Texas), and Hawley (Mo.) asking irrelevant, laughable, and in some cases, out-right wrong questions. Tuesday’s hearing gave birth to the now infamous question,

Do you agree with this book that is being taught with kids that babies are racist?

from Sen. Cruz. Sen. Howley asked incessant questions with regards to Jackson’s record with sentencing child pornography criminals, using rhetoric that framed her as “too soft” on said criminals. Jackson replied to these questions calmly, telling Sen. Howley that she was only able to sentence within the guidelines that the Senate had set. The questions that Sen. Howley had asked were then debunked by the White House and NPR, with reports that those questions came from a place of conspiracy. Sen. Marsha Blackburn (Tenn.) even went as far as to ask Jackson to “define what a woman is,” with reference to the recent headlines about transgender swimmer Lia Thomas.

These questions, without fail, are examples of misogynoir and attempts to disparage Jackson’s intelligence, hard work and experience. Feminist Moya Bailey coined the term misogynoir in 2010, with reference to misogyny that also intertwined with racism. In the simplest terms, misogynoir is the combination of misogyny and racism directed specifically at Black women. The questions presented by Republican Senators last week are a perfect example of misogynoir, and how the threshold of success for Black women is much higher than the white men and women that have sat in the seat before Jackson. Their questions perfectly illustrate how Black women have to jump through much more complicated and disparaging requirements to achieve the same as their white counterparts. Sen. Cruz and Sen. Blackburn wouldn’t dare ask Justice Kavanaugh or Justice Barrett if they thought a baby was racist, or to define a woman.

Speaking of Justice Kavanugh and Justice Barrett, their hearings, compared to Jackson’s, can further prove the Republican Senator’s blatant misogynoir shown towards Jackson’s during her hearings. Lest we forget that Justice Barrett couldn’t name the five freedoms enumerated in the First Amendment during her hearing, and was confirmed by the Senate within 30 days of her nomination. During Justice Kavanaugh’s investigation into his sexual assualt allegations made by Christine Blasey Ford, he even talked back to Minnesotan Senator, Amy Klobuchar, after being asked, “have you ever drank so much that you don’t remember the night before or part of what happened?” to which he responded, “you’re asking if I’ve blacked out, I don’t know, have you?” If Jackson behaved in that way, in any capacity, Republican Senators would immediately dismiss her experience and intelligence and see her as disrespectful and belligerent unfit to serve on the Supreme Court. As a Black woman, the first Black woman to be nominated, Jackson is expected to do more, be more and prove herself to be successful and qualified even in the face of blatant disrespect and disregard to her character. Even after her respectful, well thought out answers, some Republican senators still question her qualifications and how they will vote upon her confirmation vote.

On Thursday, March 24, representatives from the American Bar Association went to bat for Jackson in the Senate chamber, presenting a descriptive peer review of over 200 colleagues of Jackson’s career. “Her background is absolutely extraordinary and her demonstration and mastery of the law is second to none,” vouched Wade Henderson, member of Jackson’s peer review committee. Jackson, at every turn, has presented herself with dignity in the face of misogynoir and disrespect. She is one of the most qualified nominees to ever sit before the Senate. The disrespect she has faced is nothing less than the effects of being the first Black woman to do so.

The actions of the GOP Senators during  Jackson’s hearings have been nothing short of disgusting, disparaging and ridiculous.  Jackson has proved time and time again that she is qualified to do the job she has been nominated for. The attempts to belittle her with misogynistic remarks for being first cannot take away from her experience. No woman should ever have to go through the public beratement she has had to. Judge Jackson is more than worthy of the title change to Justice Jackson, despite what Republican senators might say about her.