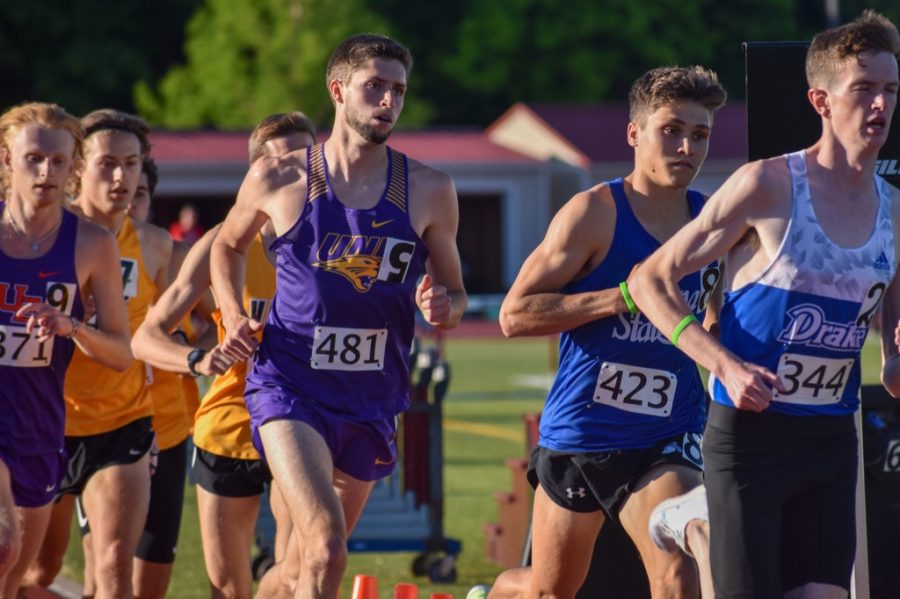 The UNI track & field teams had strong showings at the Musco Twighlight meet in Iowa City this past Saturday. They will look forward to the Drake Relays this week.

This past Saturday, the UNI men’s and women’s track and field teams took the short trip to the Francis X. Cretzmeyer Track in Iowa City, Iowa, to compete in the 2022 Musco Twilight, hosted by the University of Iowa. In a field of strong competitors, several Panthers managed to rise to the top, with eight individuals claiming the top prize in their events, as well as one relay.

In the 100-meter dash, Isaiah Trousil blew past his competition, taking the top prize with a time of 10.32 seconds. Trousil didn’t stop there, as he also took home top honors in the 200, blazing through the half-lap in 20.73 seconds, just in front of teammate Tayshaun Cooper, who came in second at 21.32.

Sophia Jungling put together a great run in the 800 meters, crossing the finish line with a time of 2:10.17. It came down to a sprint at the end, as she beat out Iowa’s Amber Aesoph by just .04 seconds.

Panther athletes also found a large amount of in the field events. In his sixth and final throw, Tom Yezek converted a toss of 185 feet, 10 inches in the discus to win the event. Yezek wasn’t the only thrower to shine on Saturday, as Darius King looked great in the shot put, winning with an effort of 66 feet, 5.75 inches.

In the women’s high jump, Rylie Todd took home top honors, clearing the bar at 5 feet, 9.25 inches. In the men’s pole vault, Teddy Allen got the victory, clearing 13 feet, 5.25 inches. The men’s long jump was where the Panthers truly dominated, as UNI swept the podium. Blair Brooks took third, Carter Morton was second, and Parker Kiewiet managed a jump of 24 feet, 5 inches to secure the win.

The Panthers also managed a victory in the women’s 4×400 meter relay, as the team of Auriona Kimbrough, Emily Vos, Jungling, and Jill Bennett finished in 3:47.79. UNI’s second team also managed to finish on the podium in this event, as Erin Kerkhoff, Katie Nimrod, Paishence Johnson, and Libby Wedewer finished third in 3:53.52.

Next up for the Panthers will be the Drake Relays at Drake Stadium’s infamous blue oval, Thursday, April 27 until Saturday, April 30. After that, UNI will take trips to Indianola College and the University of Wisconsin before returning to Drake Stadium for the 2022 Missouri Valley Conference Outdoor Championships, Friday, May 13 through Sunday, May 15.