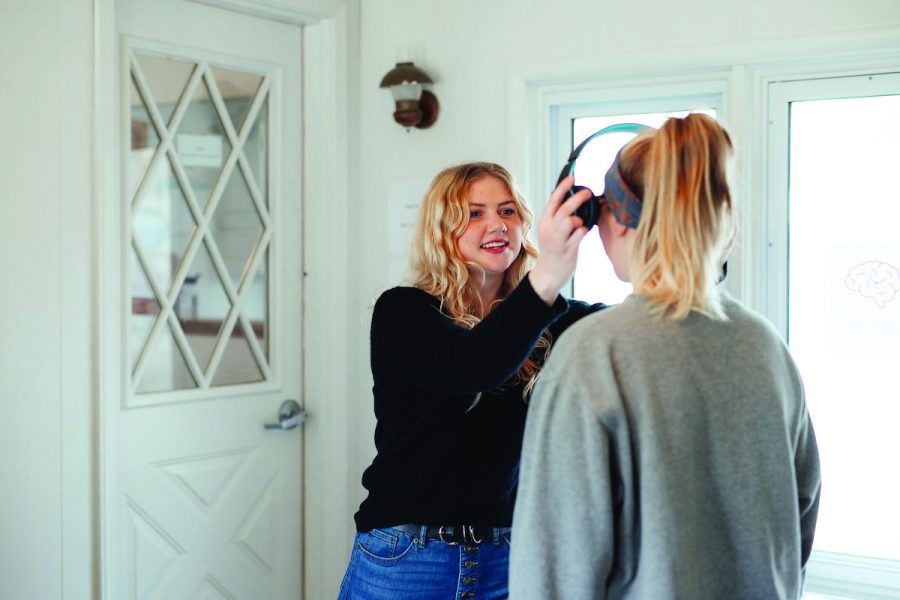 The dementia simulation is open to anyone interested in the experience. UNI students and faculty were involved in the development of the simulation.

With the help of UNI professors and students,  the first dementia simulation house is founded in the state of Iowa

The city of Cedar Falls is no stranger to historic homes. However, one unassuming house at 8712 University Avenue is currently making history by changing the ways both the community and the world understand dementia.

Since February, the home has been functioning as a dementia simulation, the first and only of its kind in Iowa.

Eran Hanke is an assistant professor of counseling at UNI who has worked closely with the house. “The dementia simulation house is set up like a home environment, a place where your loved ones would live and spend a lot of time,” she describes. “What we do is have equipment that basically has an impact on folks’ sensory experiences, their vision, sense of touch and auditory sense, so that they can get a sense of what it would be like, even for a small amount of time, to live with dementia.”

The simulation is open to anyone interested in the experience. Visitors sign up online for a time in advance in groups of four. Upon arriving, they enter the simulation, which takes place throughout the house and lasts roughly five to ten minutes. The simulation is followed by a debriefing session where participants are invited to discuss their observations, experiences and how they can apply their findings to their own interactions with people suffering from dementia.

The idea for the simulation sprouted from UNI’s own gerontology program, which studies the processes and effects of aging.

UNI is the only university in Iowa to offer a four-year gerontology program.

Hanke explained that the house has been a passion project of UNI professor of gerontology Elaine Eshbaugh for a number of years. Eshbaugh worked closely with UNI alum Megan Zimmerman, now an employee of the Northeast Iowa Area Agency on Aging, to bring the vision to life. The house also would not have been possible without generous donations from the community.

Early in the project, Eshbaugh originally pictured having a dorm room to set up as the dementia simulation. When the opportunity to utilize a house arose, she took advantage of it, a decision Hanke believes really sets the simulation apart from similar ones across the country.

“I think one of the challenges we face is that there are many people who are working very hard within their families to age in place, to be able to stay in their homes.”

To be able to simulate an experience of living with dementia in an actual home gives us a way to think about those experiences and how we can help improve people’s lives and help them, maybe even just for a little bit longer, stay within their own homes.”

“The house has been up and running for about 10 weeks, and I’m guessing we’ve probably put over 250 people through the simulation at this point, which has been pretty amazing,” Hanke continued. “Each time we open up spots, they fill up. We really appreciate the curiosity and the interest in understanding what’s happening for people living with dementia and their loved ones.”

The house provides UNI students with unique opportunities as well. UNI student Carly Spies is a double major in gerontology and communication sciences and disorders with a minor in family services. She serves as a student assistant at the house.

“I think the impact on the university is just more awareness and a great opportunity to be able to build empathy and learn some more about people that are living with something that’s different from you, and I think that goes for students of any major. I think that that’s really cool, that it’s not just for gerontology, it’s not just for family services.”

The house also provides other services to better serve those impacted by dementia. As Spies described, the house works alongside an organization called Dementia Friends.

“[Dementia Friends] offers information sessions to community members to increase awareness of what dementia really is and to share that it’s more than just memory loss. They give some ways that you can help these people that are still living in the community, because obviously, the goal is to have people living in the community as long as possible. We’ve been able to use the house as a place for students to come in, and we’ve offered these sessions paired with the dementia simulation. It’s about a two hour program, and I think last was about 35 students have gone through so far.”

Spies encourages students and community members to take advantage of the unique opportunities offered at the house. “This is the only dementia simulation house definitely in the state, and we haven’t really heard of any others anywhere that we’re aware of. Knowing that and having that resource right here has been a really awesome thing.”

More information on booking times and supporting the house can be found at csbs.uni.edu/dementia-simulation-house.