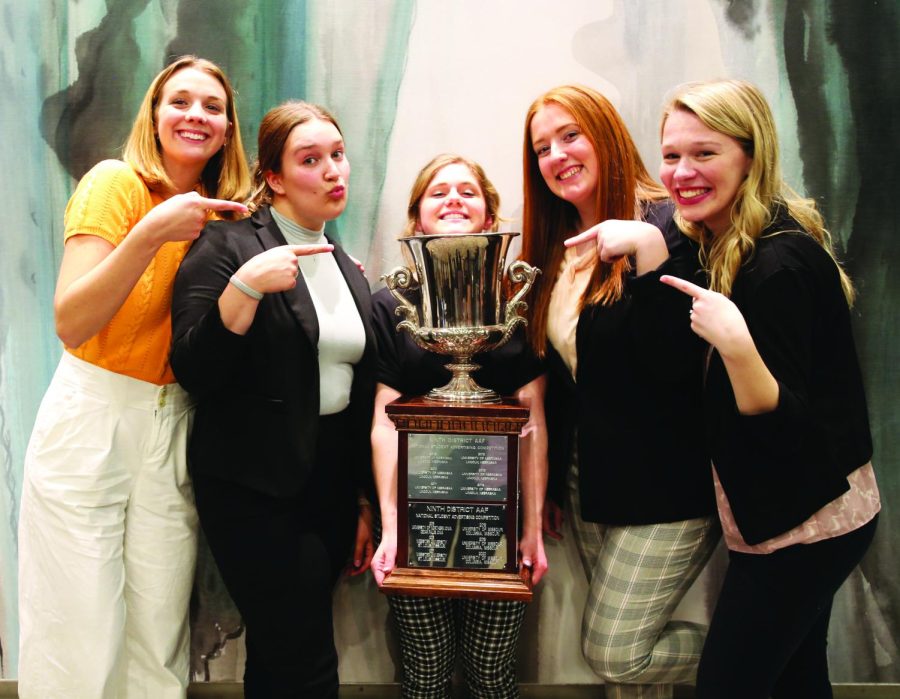 The American Advertising Federation (AAF) puts on a national advertising competition with a different national client every year. This year students worked hard to create a campaign for Meta to promote the Quest 2 VR headset. The marketing challenge of this campaign was to find a way to appeal to a younger audience of incoming college students aged 18 to 24.

Students had a figurative $10million budget to find a way to solve this real-world problem. Local ad agencies often sponsor and provide immense support. This year’s sponsor was Spinutech. Professor Matthew Wilson ran his class like an ad agency to help provide students with the most realistic experience. Wilson said, “People who take this class have to apply to be in one of the departments in the agency.

Students often complain about working on group projects, but Wilson says that complaint is uncommon in his classroom. “I know a lot of students hate group projects because there’s always that one person who doesn’t do anything but miss class. It happens a lot less because everybody’s working together, so students work astronomically hard and make a number of big deliverables.”

Four students made up the pitch team representing the 30 student team. Their work was put to the test last week in Kansas City when they presented the final pitch in a room full of other competing teams in front of a panel of five judges. One of the judges was the Director of Global Social and Influencer Marketing at Meta.

When UNI students found out they placed first for District 8, they were overjoyed. Wilson told his students, “You couldn’t have been better. It was absolutely perfect, flawless. The judge from Meta said, “They liked our idea so much; they want to try to implement some of them to actually promote the product.”

Wilson told his students their career plans and life plans could radically change from what they expected to do after graduation. For one of his students, that is exactly what happened. Marketing major and media strategist spokesperson of the campaign, Leah Little, said, “Being able to work in an agency setting prior to getting a full-time job is probably one of the reasons I got the job that I have now.”

She continued, “Being able to take classes with Matthew Wilson was probably one of my favorite things about going to school at UNI.”`

Although UNI students won first place, their work is not over. The UNI team recently submitted a recording of their pitch for the semi-finals and will participate in a Q&A with judges in a couple of weeks. That will determine if they make it to Nationals. If they do, the team will head to Nashville, Tennessee, to present alongside the final eight at the National Conference.

This has been an unforgettable experience for Wilson and his students, no matter the outcome. Wilson told his students, “In the next 60 days, your career plans or life plans could radically change. What you thought you were going to do after you graduate may change. You might have an opportunity that presents itself that you never expected as a result of this success.”

He concluded, “It’s just so rewarding and fulfilling, and it reminds me why I do this.”