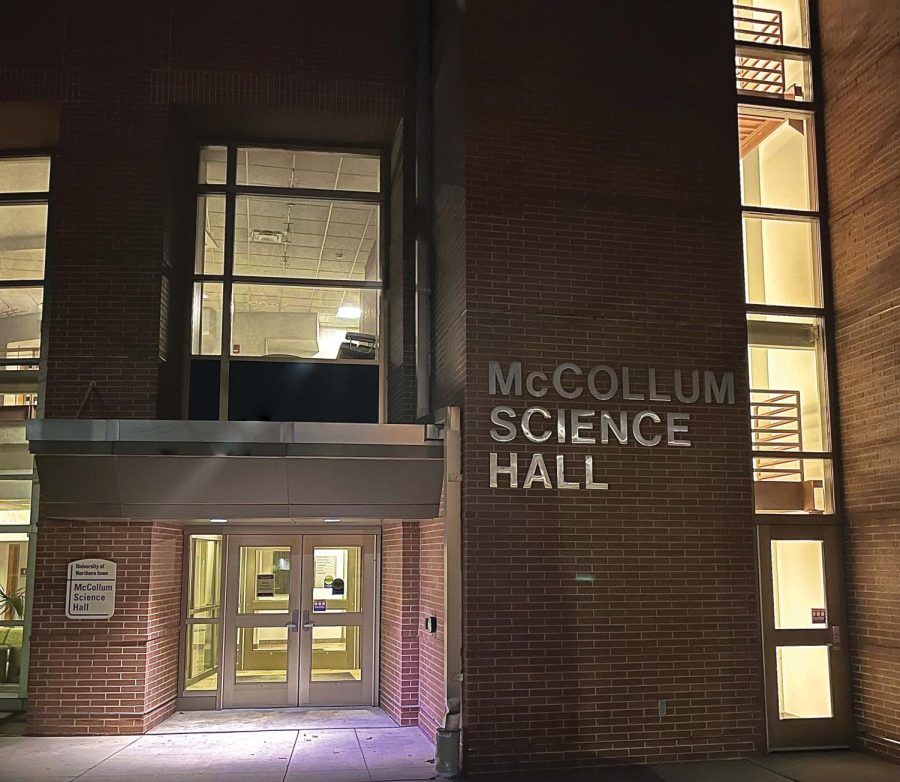 Every Thursday during the last few weeks of the semester, McCollum Science Hall hosts an observatory show from 9-10 p.m.

A group of roughly 20 individuals gathered around the polar bear artifact showcased within McCollum Science Hall at promptly 9 p.m. on April 28, unsure of what to exactly expect as they anticipated the start of UNI’s Observatory Show. Led by Professor of Astronomy and Department Head, Professor Siobahn M. Morgan and student assistant Billy Lange, participants trekked up several flights of stairs onto the rooftop of McCollum where they could view constellations in the night sky as well as UNI’s own telescope.

On this night, conditions for star gazing were not ideal, as it was chilly, windy and the sky was hazy. But many stars and constellations could still be seen every so often, as the clouds would drift apart, and the sky would open for a few short minutes at a time.

“Even though it was cloudy, I still had an amazing time learning about different stars and constellations!” said junior English education major, Kennedy Halsrud.

Guided by a wooden platform decorated with red lights, the group carefully made their way across the expanse of the roof and gathered around to listen to Lange’s vast knowledge of the night sky. Pointing with a red light saber, Lange explained the stories of Greek mythology relating to constellations, such as Cassiopeia. He also highlighted the zodiac signs that could be viewed during this time of the year, such as one bright star the group could see within the constellation of Taurus.

Morgan guided the group into and around UNI’s telescope, housed in what resembles a bullet-shaped hatch of a building. The building itself rotates and opens a portion to the night sky, allowing the telescope direct view to any object of viewing interest. Morgan also explained how telescopes work: gathering an image through collection of light with curved mirrors. UNI’s telescope has the capability to stay trained upon an object in the sky for long periods of time by following its movement.

As it was such a hazy night, the telescope was not focused onto any specific stars or other astronomical objects. However, a southeastern star made a brief appearance, and three lucky individuals had the opportunity to view it through the telescope before it was hidden again in the haze. Despite the imperfect sky conditions, Morgan and Lange provided a great opportunity for students and the public to learn and gain a great view of the night sky. Keep in mind, some patience is required as the night sky operates all on its own.

“Although it was cloudy, it was still a beautiful experience and I’d love to go again!” said freshman biology major Samantha Dick.