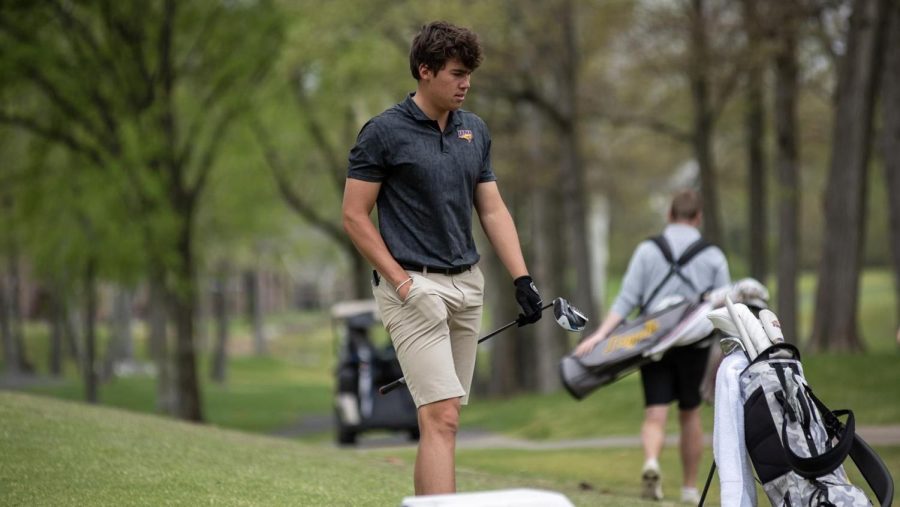 The men’s golf team capped off their spring season this past weekend as they traveled down to Paducah, Ky for the Missouri Valley Conference Championships. The Panthers did not perform well as a team, finishing in last place behind the other eight conference teams. On the bright side, junior Griffin Parker received individual all-conference honors and placed 8th among all eligible players.

Parker’s honors came from his consistent play, as he improved in each round during the 54-hole tournament. He carded a 223 (76, 74, 73) across the three rounds. He sat in 14th place going into the final day and was able to find himself within the Top 10 by the end. This year’s honors are his second in his career as he finished in 10th place just last year.

With a total team score of 933 (321, 304, 308), UNI finished in last place. Winning the championship was Southern Illinois with a total score of 874 (295, 285, 294), which was a full 17 shots better than runner-up Valparaiso with 891. What helped the Salukis earn their third conference title in six seasons was their balanced lineup. All five of their players placed within the Top 14.

Along with their team victory, Southern Illinois also boasted two all-conference players in Tom Cleaton and Matthis Besard, who also won Golfer of the Year. Danielle Kaufman won Coach of the Year.

Anthony Delisanti of Valparaiso finished in first place among individual players with a score of 213 (74, 72, 67). He earned all-conference honors along with being named Newcomer of the Year.

Looking back at the Panthers’ season, some notable highlights were their 3rd place team finish at the Valpo Invite in late February. Griffin finished in a tie for first place at the Jackrabbit Invite in March, which included him leading the field with 16 birdies across the three rounds.

Doyle, Pries and Storbeck will all be graduating. The rest of the team will take the summer off to train and be ready for the fall season.