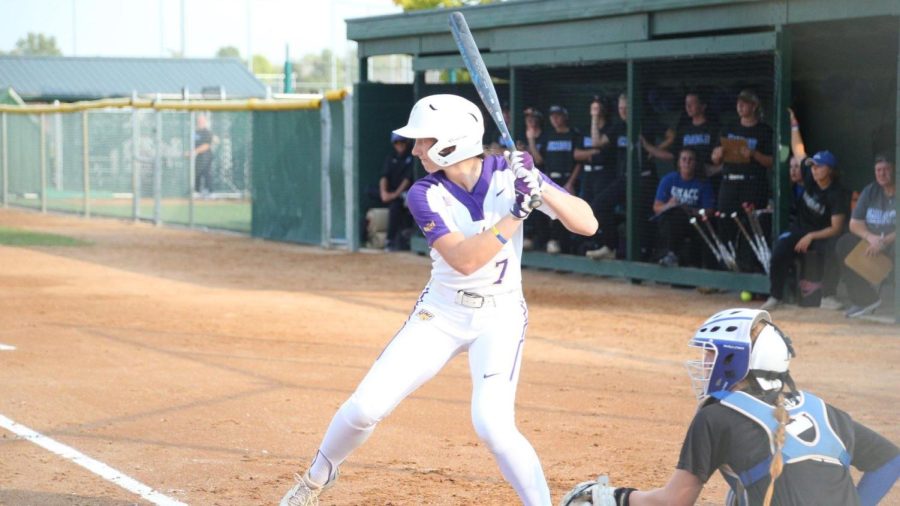 The UNI softball team broke the program record for longest winning streak for their two wins over Indiana State on Sunday. The winning streak now sits at 16 games with four regular season games left to play.

A special season became a record-breaking season on Sunday when the UNI softball team swept the Indiana State Sycamores in a doubleheader at the Robinson-Dresser Sports Complex. This gave the Panthers, who hold a 20-1 record in Missouri Valley Conference (MVC) play, their 16th consecutive victory, breaking the program record for most consecutive wins of 15 set in 2012.

In game one of what was supposed to be a three-game series before weather caused the cancellation of Saturday’s game, UNI got on the board first. Kylee Sanders reached base on a Sycamore error, allowing Kamryn Shaffer to score. Emmy Wells followed this up by lining a single into the outfield to score another run, giving the Panthers a 2-0 lead.

Dodge put a very unique run on the board in the third. After successfully stealing second base, Dodge advanced to third after the catcher’s throw was mishandled by the second baseman. However, the ISU center fielder also misplayed the ball in the outfield, allowing Dodge to easily score and extend the lead to 3-0.

After a run from each team in the middle innings, UNI led 4-1 when the Sycamores turned the momentum around with back-to-back solo home runs from Bella Peterson and Annie Tokarek, cutting the lead to 4-3.

The Panthers managed to put the game away in the bottom of the fifth when Wells stepped up to the plate with two runners on base and hit her 15th home run of the season, driving in three runs and giving UNI a 7-3 lead that they would hold until the end.

It was a solid pitching performance from Kailyn Packard, giving up four runs with just two walks as well as striking out 12. Packard was credited with the win, bringing her season record to 18-4.

In the second game of the doubleheader, UNI got on the board first when Madison Parks hit a towering home run several feet beyond the fence in right-center field, giving the Panthers a 1-0 lead in the bottom of the first.

The Sycamores would respond in the top of the second, when Abi Chipps drove a base hit into center field, scoring two runners to give Indiana State a 2-1 advantage. Daryn Lamprecht managed to tie the game in the bottom of the third, hitting her eighth home run of the season. The solo blast tied the game at 2-2.

UNI kept the offense going in the fourth. Taylor Hogan led the inning off with a base hit, and with two outs Mya Dodge roped a line-drive double into centerfield, giving UNI a 3-2 lead.

It was in the fifth inning when UNI put the game away for good. With runners on second and third, Wells hit her second home run of the doubleheader, and her MVC-best 16th of the season, giving UNI a 6-2 lead. The Sycamores would manage to get one more run across in the sixth, but the Panthers would hold on to win their 16th consecutive game, 6-3.

It was another impressive performance in the circle from Samantha Heyer. In seven innings, Heyer allowed three runs, only two of which were earned, while striking out 13 Sycamore batters.

With the wins, the Panthers improve to 29-11 on the season with a 20-1 record in MVC play. UNI will be back in action for their final home game of the year on Wednesday, hosting in-state rival Iowa. They will conclude the regular season this weekend, hitting the road for a three-game series with Bradley. A doubleheader is scheduled for Saturday, with a single game on Sunday. After that, UNI will look ahead to the MVC Tournament beginning Wednesday, May 11 in Springfield, Mo.