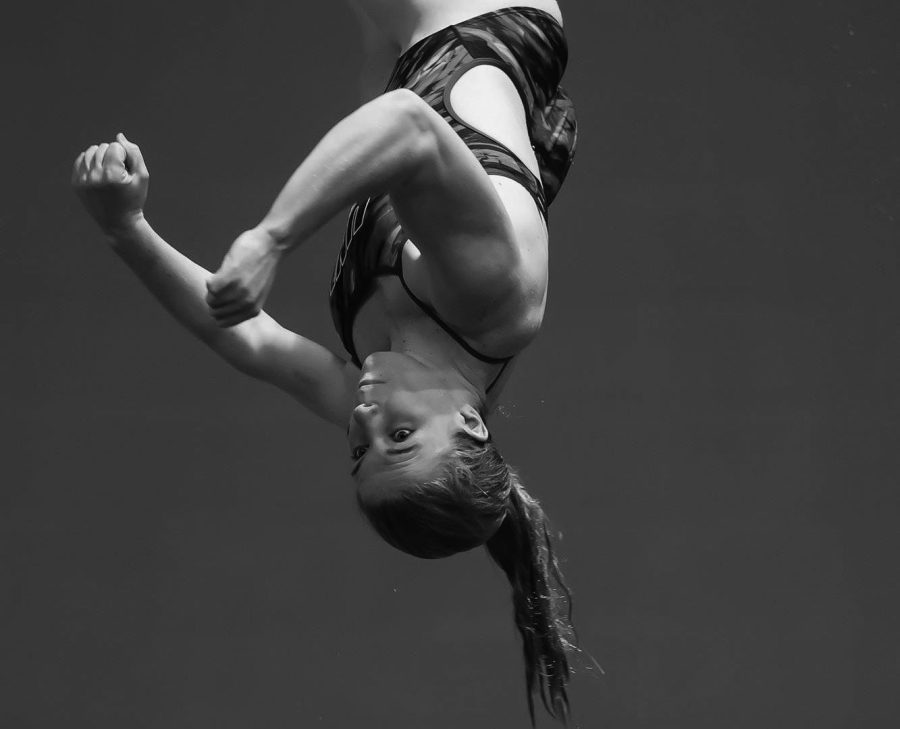 Along with her talent on the softball field, Taylor Hogan is also very successful on the boards for the swimming and diving team. This past season, she was named the Missouri Valley Conference Diver of the Year.

Taylor Hogan visited many colleges throughout Iowa, specifically to play softball. Since she was little, softball had been her dream sport to play in college. Being open to all options, she went on a visit to UNI and met Ryan Jacobs, head coach of the UNI Women’s Softball team, who graciously gave her the opportunity of playing Division 1 level softball. Hogan knew this was something she wanted, with the added bonus of being close to her hometown of  Waterloo.

Once Bethany Hovland, coach of the diving team at UNI, got word of her commitment to UNI playing softball, she proposed Hogan also joining the UNI Swim and Diving team. In addition to being a standout high school softball player, Hogan was also an accomplished diver in high school, where her team was coached by Hovland.

Committing for the diving team for UNI has certainly worked out in Hogan’s favor. “I would say my greatest achievement thus far as a UNI athlete would be being the 3-meter conference champion. This just happened this past weekend at our conference championship in Iowa City. This moment was so special to me because I got to spend it with my coaches and teammates who have been there for me all year,” Hogan said. “I also was named Diver of the Year and my coach Bethany was named Diving Coach of the Year. Getting to spend this moment with her was something I will never forget. She believes in me each and every day. Another cool part about this story is that Bethany was the last diver at UNI to win an event!”

Hogan, a redshirt sophomore/junior, has made countless achievements thus far at UNI and has been featured on many of UNI’s social media pages.

Daughter of Pat and Kari Hogan, who both graduated from UNI, the Hogan family are Cedar Valley natives, with Hogan and her two siblings attending Waterloo Columbus High School. While being a part of the softball and diving teams throughout high school, Hogan also was a gymnast, competing all over the state. While on the diving team in high school, Hogan was a three-time IGHSAU state qualifier and two-time all-state honoree.

Being a college athlete in two sports, Hogan said she puts her studies first. Hogan is majoring in communication disorders with a minor in biology. In her free time away from school and sports, Hogan said she likes to “go home for a meal and hangout with my family. Going home for a night allows me to not think about college and just relax. I will also hang out with my cousins and their little kids a lot of the time. I will watch Netflix or hangout with my roommates.”

Hogan emphasized how great of a support system her family has been throughout her athletic career. “They [Hogan’s family] have been with me through it all and know what they can do to help me in whatever way.”

With the support of her teammates, coaches, family, and friends, Hogan has achieved great things at UNI. For the softball team, Hogan was named MVC Championship Elite 17 Award winner, finished with a season high 7 putouts against Missouri State, started in 48 softball games in 2021, and finished the 2021 softball season with a .245 batting average. For the diving team, in the 2019-20 season, Hogan was named to the MVC Scholar-Athlete team and was a finalist on the 1-meter at the MVC Championships in Columbia. In the 2020-21 season, Hogan earned All-MVC honors and names to the MVC Scholar-Athlete team and finished fifth on 1-meter and 10th on 3-meter at the MVC Championships in Carbondale. In the 2021-22 season, Hogan qualified for the NCAA Diving Zones on 3-meter against Nebraska-Omaha and earned MVC Diver of the Week honors in October 2021 and February 2022.

Despite the hectic pace as a two-sport athlete, Hogan’s key is to slow down. “Enjoy the moment. Don’t worry about the future and things you can’t control. We only have now,” she said.