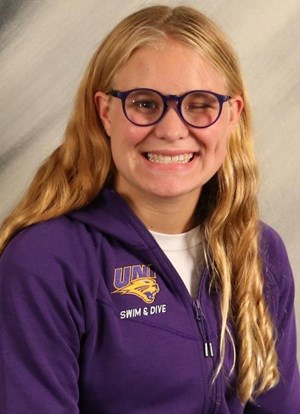 UNI swimmer Olivia Chambers has overcome incredible obstacles to become a critical member of the UNI Swimming and Diving team.

Becoming a Division 1 athlete takes time, practice, dedication, and a great deal of hard work. This accomplishment doesn’t come easy, and Olivia Chambers faced obstacles much greater than most.

“I’m legally blind,” said Chambers, a freshman swimmer at the University of Northern Iowa. This didn’t deter her though, Chambers jumped back in the pool after being diagnosed in 2019. “I couldn’t think of quitting,” she said.

Diving back in the water wasn’t easy for her. Chambers had a lot of adjusting to do in order to continue swimming at a highly competitive level.

“I could barely see the wall so I learned to count my strokes just to know when I flip,” Chambers said. “It was really frustrating. I would run into walls and all of my other teammates.” Talking to coaches and having them read sets to her greatly helped her in the pool.

Swimming has been a part of Chambers’ life since the age of four and that was not something that was going to change. “Swimming is the one thing that really keeps me going and keeps me happy,” she said. “I just love the water. I love to race other people.”

Chambers, 18, is a distance freestyler and individual medley swimmer on the UNI Swim and Dive team. She is originally from Little Rock, Ark. and attended high school at Mount St. Mary Academy. During her visit to campus, she was drawn to the atmosphere here at UNI. “I thought the campus was really nice,” said Chambers. “I talked to the coach and he seemed cool and I really liked all the team activities that they did together.”

Before meets, Chambers likes to listen to music and dance around with friends. “Getting really excited and pumped up. That’s what helps me the most,” said Chambers. She has been able to keep a light outlook on life despite the challenges that have come her way. Chambers biggest take away from her experiences is to have fun in life since that’s what keeps her happy.

Chambers is already an accomplished athlete, winning the Heil Mile Award and the CHI St. Vincent Health Award but she has bigger plans for her future. Chambers is majoring in biology and made the dean’s list her first semester as a student athlete. She is a member of the UNI Dance Marathon and the pre-med club here on campus.

In addition to her academic feats, she has more goals for her swimming career. During her collegiate career, her main goal is to build speed and improve her times during meets.“I did get much slower,” Chambers said about swimming after becoming legally blind. “Honestly, I didn’t get faster until this past month in February at our conference meet.”

Chambers also has swimming goals past college. “I’m going to try to go to the paralympics in 2024,” said Chambers. She is currently in the process of filling out the paperwork to qualify as a paralympic athlete. “We’re going to see if I can do that,” she said.

Chambers has earned a great amount of success by keeping a positive outlook on life and persevering through her struggles. “Everytime I jump in the water I have so much fun and that’s really what has helped me get through all my eye struggles,” said Chambers. “There’s going to be a lot of things that just set you back but you always need that one thing that keeps you motivated and keeps you going.”