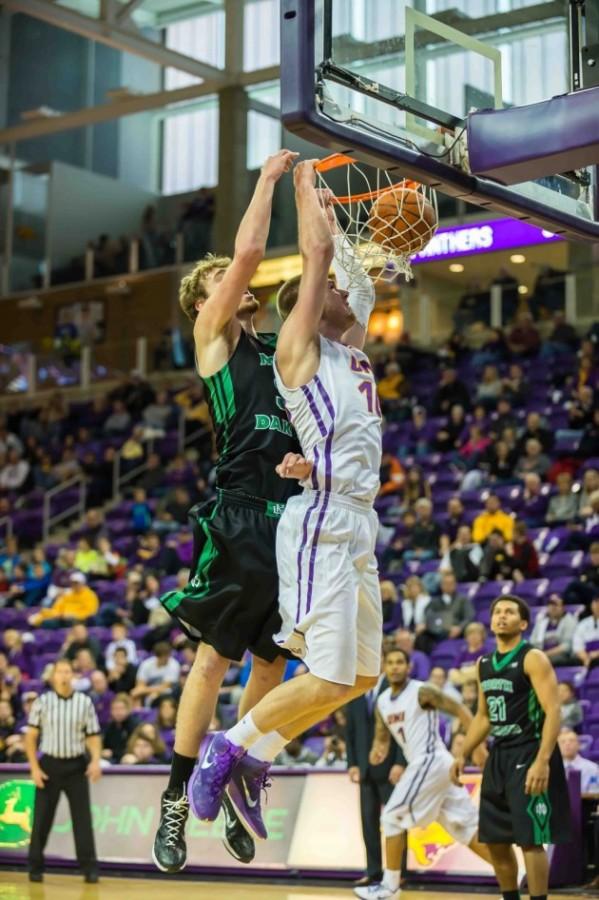 “We, as the players, feel really honored to be a part of the team here at UNI,” said Seth Tuttle. “We are pretty lucky to have a good coach like him.”

Tuttle put the first points on the board with a 3-pointer. Tuttle finished the game with a career-tying 24 points.

North Dakota answered with a 7-0 run that kept them in the lead for the majority of the half.

Tuttle and Wes Washpun kept the deficit pretty thin. The first half was a tug-of-war as the teams were tied eight times and 12 lead changes. Nate Buss drained a three at 1:05 to give the Panthers a 31-29 lead at the end of the half.

North Dakota started the second half by tying the game but UNI had other plans. Tuttle put in a layup that started a 9-0 run and kept the Panthers in the lead for the remainder of the game. Nate Buss, who had an early season injury, made his season debut and contributed with 12 points that all came from behind the 3-point line. Tuttle finished the game strong scoring 14 of his 24 in the second half. He also led the game with nine rebounds.

“I’m really lucky to be our head coach,” Jacobson said. “This is a great university and community. We have an opportunity because of those things. It is really lucky that my name is on this. This is a terrific, terrific place.”

Washpun and Tuttle felt honored to be part of making history.

“It is definitely special to be a part of this with all the great teams he’s had over the years,” Washpun said.

Washpun finished with 15 points, including 7 of 10 from the free throw line.

UNI will continue the season against Stephen F. Austin on Tuesday Nov. 18 at 8 a.m. in Texas. That game will be part of ESPN’s College Hoops Tip-Off Marathon on ESPN2.