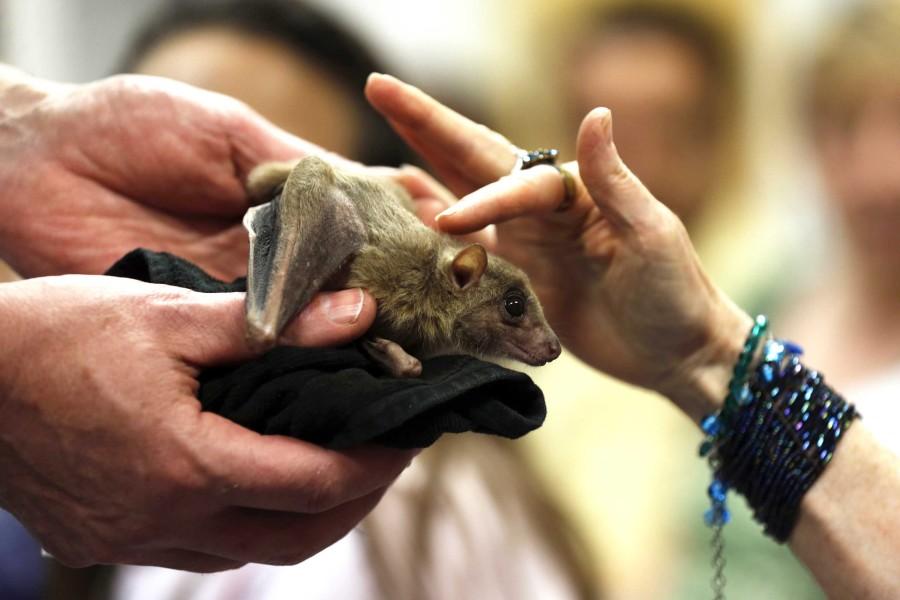 "A pollinator is any animal that helps a plant reproduce by moving its pollen from one plant to another,î says Matthew Shepherd, spokesman for The Xerces Society for Invertebrate Conservation in Portland, Ore. ìBees are the most important group of pollinators in North America, but it also extends to flies that pollinate, moths, butterflies. Broaden it beyond insects and youíll find some species of bats that pollinate." (Scott Strazzante/Chicago Tribune/TNS)

I used to think bats were cute. Seriously, at one point I entertained the idea of domesticating one until I learned that it’s illegal.

Anyway, my past tense reference to enjoying bats is intentional. I am no longer a fan of them. Well, at the very least, I’m not a fan of sharing my living space with bats anymore.

I didn’t think much of the phone call I received at two in the morning from my roommate complaining about a bat encounter in our kitchen. I noted the inconvenience of having a bat flying between my roommate’s face and the refrigerator, but I didn’t consider it to be a big deal.

I thought: Okay, we have a small pest problem. It’s nothing that can’t be worked out in a timely manner. And to be honest, I was not even worried about how long it would take to rid our house of the bat. Don’t get me wrong, it was always “the sooner the better,” but I was in no particular hurry. It really wasn’t bothering me.

…Until I found out that bats are very social animals that tend to live in colonies. To put this in perspective, 10-20 bats are considered a “small” colony.

And that they actually do bite and they do scratch. And through these actions, some bats transmit rabies and other infectious diseases, like Ebola and the Marburg virus, diseases with fatality rates of up to 90 percent for infected humans.

Not only is something like rabies itself a cause for serious concern, but also the cost of post-exposure rabies shots is almost more of a concern. The vaccinations can be anywhere from $3,000-$10,000 and often aren’t covered by insurance.

Oh, and the phrase “Bat sh– crazy” is no joke either. Bat guano carries Histoplasmosis, which is contracted through inhaling the spores released by the fungus. It’s so hazardous that it’s recommended that you wear a HEPA mask and treat it with a bleach solution BEFORE coming into contact with it.

After a ten-minute Google research session, I quickly realized that I was experiencing significantly less anxiety than my roommates were due to my lack of awareness surrounding bats.

Of course, this is information I learned after several trips down to the basement to find the bat. We had been putting ourselves at risk without even knowing how risky it was. One of my roommates even broke his badminton racquet during battle against the bat.

Prior to conducting my research, I was bothered more by my roommates’ seemingly exaggerated anxiety than I was by the bat’s presence. For instance, when one roommate expressed concerns about the bat biting and scratching one of us I was laughing before he finished talking.

Now, I had become so paranoid that I was avoiding showering; it was time to actually deal with the situation. We began by calling the Blackhawk County Health Department to get some information that we could cite when discussing the issue with the landlords. From there we contacted a pest control company that offers free on-site assessments of the property.

That was the next problem.

“Bat-proofing” a property costs hundreds of dollars. The proofing includes expulsion of the pest(s), a cleanup, followed by patching any openings in the house that bats may otherwise enter through. This was when we passed the issue on to the landlords per the Iowa law regarding the landlord’s responsibility to “maintain a fit premises.”

And that isn’t the end. In fact, I can’t even share the end, because I don’t know it quite yet. And it is with great bittersweet unease that I say the bat is no longer to be found.

As for the moral of brushing off a bat problem: don’t. These are sensitive animals that have the potential to cause a lot of harm when they’re disturbed.