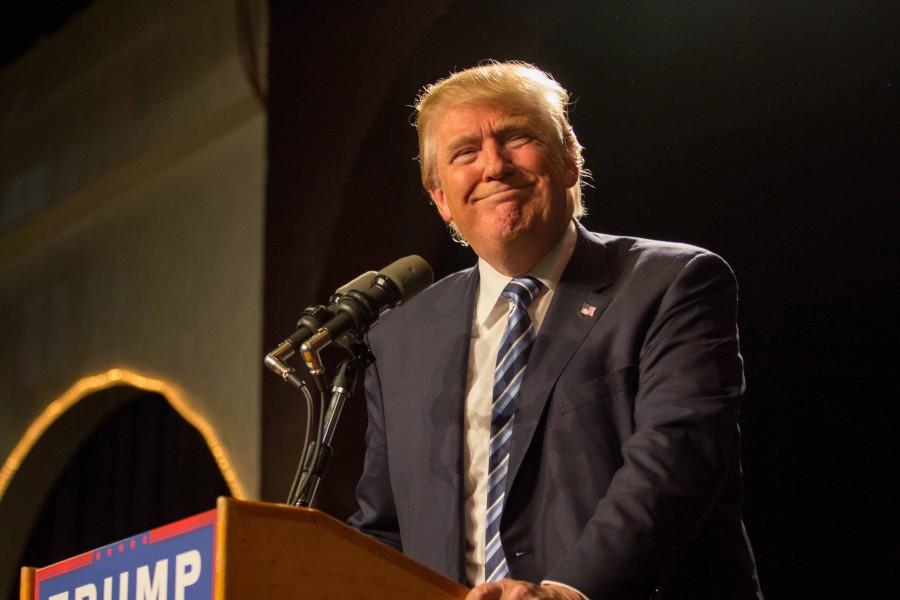 Touting a self-funded political campaign, Donald Trump’s speech about building a wall along the U.S.-Mexico border and his dislike for the current state of U.S. foreign policy was met with both shouts of support and demonstrations of protest.

Trump, who spoke at the Electric Park Ballroom in Waterloo on Wednesday, talked about his abstention from “political speak,” which he defined as a “weak” tone. He cited fellow Republican candidates Jeb Bush and Marco Rubio as those who used weak tones.  Trump compared his “strong tone” to that of Winston Churchill. He positioned himself as an outsider candidate.

“I was never a politician before; for three months I’ve been a politician,” Trump told a capacity crowd of 1,100 (with more than 100 people listening outside).

After a review of his poll numbers, citing recent CNN polls in swing states such as Florida, Pennsylvania and Ohio, Trump launched into his interpretation of what’s happening with U.S. trade policy, which he characterized as the U.S. “losing to Mexico and China on trade.” He claimed trade imbalances of $45 billion and $450 billion with these countries respectively.

Trump then outlined his plans to build a wall, which he once dubbed as “The Great Wall of Trump,” along the U.S.-Mexico border.

Among the group of some 20 protestors, one held a sign reading: “Deporting 11-12 million undocumented immigrants is inhumane and creates a hole in the economy.”

A crowd member listening to Trump outside the venue yelled to the group of protestors, “Do you pay your taxes?”

Pete Moreno, a Waterloo resident and protestor, said he disagrees with Trump’s “ideology towards Latinos, primarily, among others.” He said that implicit in Trump’s ideology is a goal of “restoring” the U.S., in that he wants to “clean the country up again, leaving only the white race.”

Moreno went on to say: “Mr. Trump, we’re not criminals; we’re not rapists or murderers. We are students, engineers and all kinds of other things.”

Others in the crowd supported Trump. Amber Burress of Aplington, who has voted for Democratic candidates in the past, said she connects with Trump’s plan for a mass deportation.

“It’s the tough stance we need,” Burress said. “And I’m not saying that to be racist or to be mean.” She said she wants immigrants to come to the U.S. “the right way.”

Jared Girres, freshman criminology major, does not agree with Trump on any issue, citing predominantly social issues. Girres said he came “for the entertainment.”

“It’s amazing to me that people can actually agree with some of the things he says,” Girres said.

Keith Coburn, of Prairie du Chien, WI, waited outside the venue to listen to Trump. He said he is an independent that initially supported Hillary Clinton but switched to Trump due to his stance on immigration and his tax plan.

“We’re lowering [taxes] big league for middle income,” Trump said in his only mention of his tax plan that cuts taxes across all tax brackets.

Trump’s notable silence on climate action sparked additional protest. Five audience members wearing “The Climate Mobilization” shirts held signs and chanted, “mobilize now.” The signs were quickly ripped from their hands, and the Waterloo Police escorted them from the premises.

Peter Clay, one “Climate Mobilization” member, said Trump and other Republicans need to address climate change as an issue, and that the country should rally around the issue with the same enthusiasm as World War II. Some protestors were wearing Rosie the Riveter bandanas to symbolize this.

Trump remained consistent on his stance regarding ISIS, saying that he supports Russia “bombing the hell out of ISIS.” He also criticized the Iran Nuclear Deal, saying that we would have been a better negotiator.

“The Persians are great negotiators … [but] we want our prisoners back,” Trump said, referring to four American prisoners that are being held in Iran.

Trump was confident in his standing recent polls, though his lead has slipped in Iowa polls. It is down to just a five-point lead over candidate Ben Carson, according to a Sept. 29 NBC News/ Wall Street Journal poll.

Waterloo natiive, Dan Gable, spoke at the event with Trump on stage.

“A lot of you here are committed to [Trump] and want to go that way for sure,” Gable said. “But I’m here to get an education and to hope to be able to change paths. I put the wrestling hat on and, even though it represents Trump, I’d like to put this Trump hat on as well.”

Matt Reinert, senior social work major at UNI, said he supports Ben Carson and John Kasich because they are “less polarizing” than Trump.

“I didn’t expect it to be this clear demographically,” Reinert said of those who came to see Trump. “I expected it to be more diverse than this, but it’s all middle-aged white [people].”

“If I get elected president … we are going to be run really smartly,” Trump said. “We’re going to have a country that you’re really proud of.”