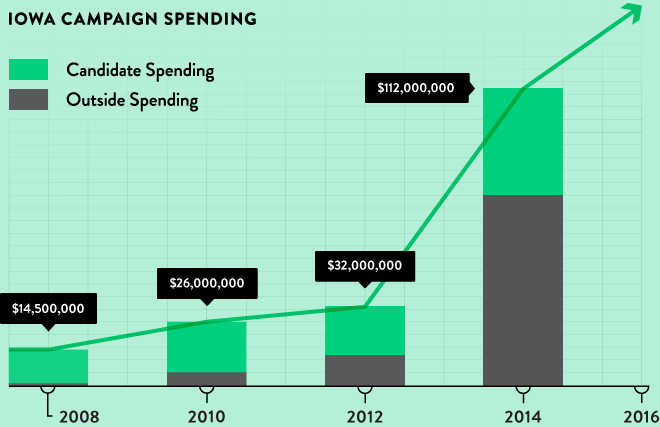 Statistics, courtesy of Iowapaystheprice.org, show that outside spending on political campaigns has grown exponentially since 2008.

“Since the Supreme Court’s Citizen’s United decision, the amount of campaign money has exploded, and for the first time ever most of the spending is being done by outside groups rather than candidates,” reads a report by nonprofit, nonpartisan interest group Iowa Pays the Price (IPP).

IPP is hoping to raise awareness about the findings of this report. They stopped by UNI’s campus on Thursday, Sept. 24 as part of a recently launched campaign tour. The tour was designed to generate and preliminary interest in the issue and they will eventually reach out to interested students in hopes of generating movements on the ground at each major Iowa campus.

According to the report, campaign expenditures have been steadily increasing over the past decade. Spending in Iowa has increased from $32,000,000 to $112,000,000 from the 2012 elections to the 2014 elections, a major spike compared to previous years. More significantly, according to IPP, is that the majority of that increase can be traced to outside groups rather than individual campaign donors.

The report also cited a projection, published in The Hill in January, that candidates will spend a total of $5 billion on the 2016 presidential campaign.

The report was conducted in conjunction with Maplight, a nonpartisan research organization that provides data on the influence of money in politics.

Monica Biddix, campaign director with IPP, said many are starting to believe there is a correlation between big spending and little voter turnout, although this hasn’t been proven with research.

Biddix said Iowa voters are constantly bombarded with television ads, and candidate information is broadcast in Iowa early on since it is the first caucus state and a swing state in the general elections. According to Biddix, this causes an upward trend in voter apathy and voter fatigue.

An example of this, according to Biddix, is that 50,000 absentee ballots went unreturned in the 2014 election.

She said, working on campaigns in the past, they would target voters who hadn’t turned in ballots, but that they often would encounter voter frustration with the process — and because of this, those voters refused to submit their absentee ballots.

“This is an issue that crosses party lines,” Biddix said.

“There’s no way to deny that money plays a huge role in politics,” said freshman elementary education major Etienne Porras. “I think that money in politics ought to be on just a small, individual level. When you have these massive companies that contribute so much money to the particular candidate who they approve of, it allows their voice to be far louder than anyone else’s. And that’s where I think money is starting to poison the democratic process that we, as Americans, pride so well.”

Biddix said many Republicans advocate for eliminating the current cap on individual spending to each federal candidate, $2,600 according to fec.gov. By this logic, according to Biddix, money could then be traced to individual donors.

The Supreme Court in 2014 ruled that the $48,000 dollar cap on individual spending to federal 2-year campaigns was unconstitutional, allowing unlimited spending by individuals on campaigns but not individual candidates, according to a New York Times article.

For many left-leaners, the rise of the influence of moneyed interests can be traced back to the Citizens United Supreme Court’s  ruling that deemed corporations to be people, and their form of free speech is donating money.

This opened the door for super Political Action Committees (PACs) that individuals can donate to anonymously, making it difficult to trace that money back to individuals.  PACs only have to disclose expenditures rather than donors.

“We are not a prescriptive organization,” Biddix said. “We are not saying, verbatim, that Citizens United should be overturned.  We are aimed at raising awareness. Our solution at this point is just educating and engaging others and bring attention to it.”

Biddix also said that the current system, in which candidates must raise millions of dollars to be competitive in elections, leads to candidates devoting more time to raising money than listening to constituents.

“I think, especially when you’re a student, that’s probably not when you’re going to have the most money in your entire life,” Biddix said. “And yet, the politicians and the legislators and the people that we elect are going to be framing and forming the policy and legislation for your future are beholden to the wealthy. And I think students in particular feel like they don’t have a voice anyway and are a bit disillusioned… This just doesn’t make it easier for them to go out and vote and care about the system because it’s basically, on both sides, controlled by a minority of wealthy donors. “