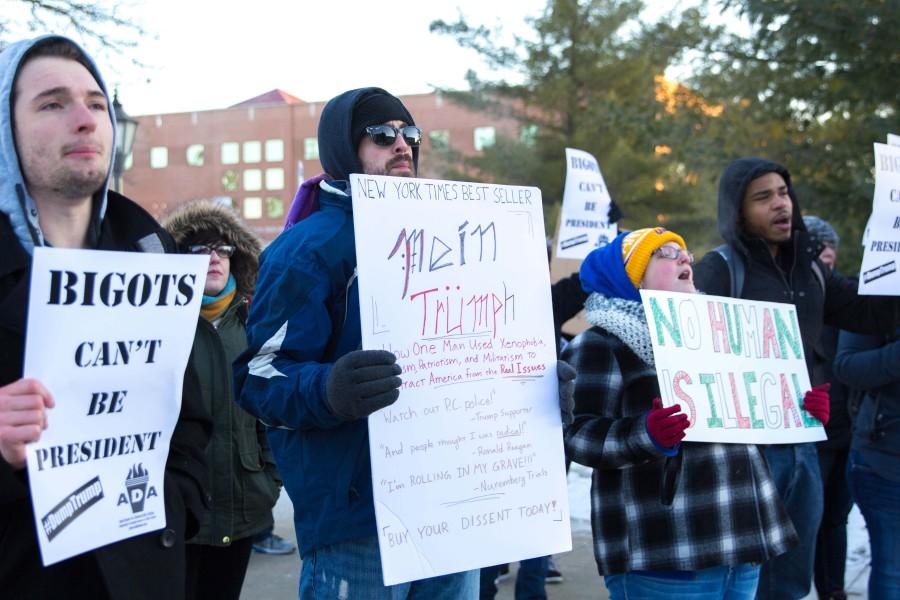 If this election cycle has proven one thing true of the presidential candidates, it’s who’s in touch with reality – who it is that acknowledges (and sticks with) the issues that average American people actually face, and who doesn’t.

Tuesday, the leading Republican candidate, Donald Trump, visited campus and was met by several protestors, both outside and inside of the rally. For the most part, I would assume these protestors are people who, too, are sick of the bigotry, the prejudiced words and the lack of substantive discussion lead by Trump. He’s not focusing on the issues plaguing the United States today. This is why when I heard that the protestors at one point chanted “Feel the Bern” I was a bit disappointed.

I am a committed supporter of Senator Sanders and his run for presidency, but I am also a committed proponent of sticking with the relevant issues at hand rather than resorting to “candidate camps.” Don’t get me wrong, I’m immensely proud of my fellow students for braving the bitter cold to protest the words and ideas of a dangerous man. They are right to refer to him as a bigot and are right to recognize his ignorance as particularly dangerous.

But there is a plethora of topics that could have been expressed regarding Trump’s inadequacies and the danger that his demagoguery poses. But by moving away from real issues for this moment of presidential endorsement, what the protestors did here was not radically different than Trump obsessing over China any chance he can get during rallies for his United States presidency. We must stick to the issues as much as possible.

Of course, being in a public position of power, it is important to decide in what context the influence will be utilized — relevant, real concerns or exaggerating and altogether ignoring significant issues. Here are five ways Trump failed to use his position to talk about real, important matters last night:

1.) This goes for all candidates, if you come to UNI’s campus (or any college campus) to speak, you must address student loan debt and the rising cost of tuition. Trump did not mention any such thing. NI records show that other candidates such as Rand Paul have sidestepped such important concerns to a localized demographic. This is unfortunate.

2.) Trump’s insistence on reviewing his poll numbers. This is something we should all be used to by now, but the shear time he devoted to this last night was staggering. In a roughly 40-minute speech, Trump used at least 10 minutes to talk about his poll numbers.

3.) Trump’s insistence on reviewing other candidates’ poll numbers. Again, we should be used to this by now, but Trump should stick to relevant issues in his speech rather than pointing out why his opponents should “drop out” of the race.

4.) This has a tie to number three, and I will explain why, but it’s Trump’s de facto pandering to “support our vets” without having any clear plan to do so. Last night, following a review of Jeb Bush’s poll numbers and the claim that Bush spent $69 million on his campaign, Trump suggested the money could have been better spent elsewhere: “Give it to all of you, or, you know what, give it to our vets!” (paraphrase) he cried to raucous applause. I will concede that this is more of a personal annoyance, but it’s the idea that his de facto claim when he is confused is to make a non-substantive call to supporting our vets.

5.) Trump did not address income inequality, nor did he utter the words. Frankly, this is preposterous. Additionally, he mischaracterized Senator Sanders as a man who is going to “tax you all at 90 percent” in a silly impression of Sanders. He misrepresented many others as well, including Hillary Clinton and Ted Cruz. He did not address prison reform or policing reform. His only mention of campaign finance reform, as is his classic motto, is that he is self-funded — beholden to none. There is bipartisan agreement that we do not want billionaires funding our candidates — that much we can agree upon — but do we want billionaires being the only ones who can run for President?

As voters, we must hold our candidates to the highest scrutiny about the issues, while maintaining our own focus as well.