Panthers feather the Redbirds in 61-35 victory 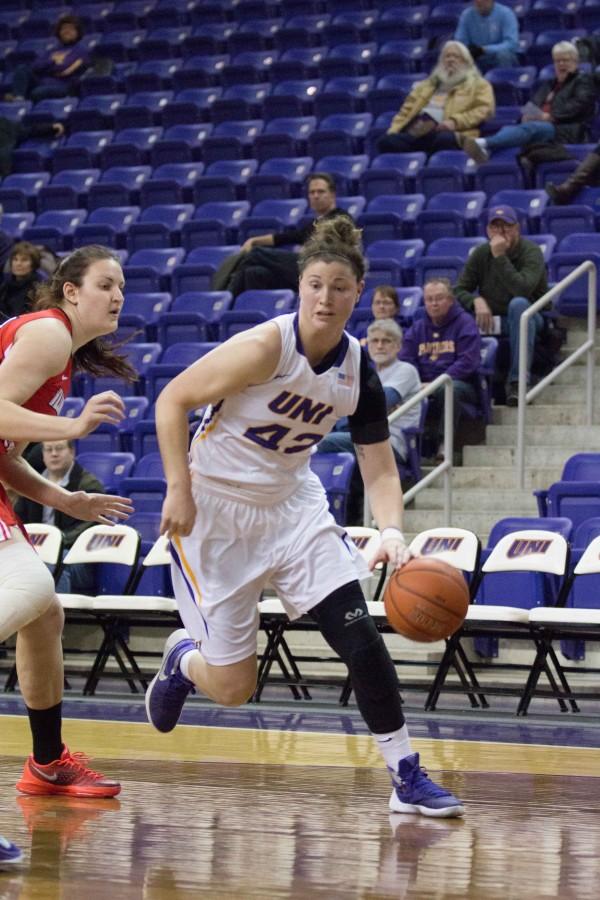 The UNI women’s basketball team traveled to Normal, IL on Sunday for their second consecutive away game to take on the Illinois State Redbirds.

The Panthers walked away with the victory, 61-35, and kept the lead for most the game. They did not let the Redbirds score more than seven points in each of the final two quarters.

The Redbirds gained an early 7-4 lead, but plenty of ball movement and open looks helped cut it down. Madison Weekly’s 11 points led the way to a Panther 13-4 run and a 20-11 lead at the end of the first quarter.

The Panthers started the second quarter strong with an 8-3 run that consisted of two three-pointers from Weekly and Amber Sorenson. After five minutes of missed shots and turnovers, the Redbirds managed a 6-3 run to bring the score to 33-21 at halftime.

In the first half of play, the Panthers had already acquired seven assists, seven steals and 33 points, compared to the Redbirds’ five assists, five steals and 21 points.

Jen Keitel started off the third quarter with the first five points. After a successful layup by Stephanie Davison, the Panthers found themselves ahead, 44-26, with 2:05 remaining in the third.

The Redbirds managed five points in the first minutes of the fourth quarter, but they stalled for the remainder of the game. The Panthers scored consistently and did not let the Redbirds within 20 points until the 61-35 finish.

The Panther defense pressured the Redbirds and did not let them score many baskets.

During the second half, the Redbirds shot just 4-27 from the field, 1-6 for three and 5-12 on free throw attempts.

Keitel was the highest-scoring Panther during the third and fourth quarter with 11 points. She shot 5-7 from inside and managed to complete the three-point plays.