Talking science and religion over beer 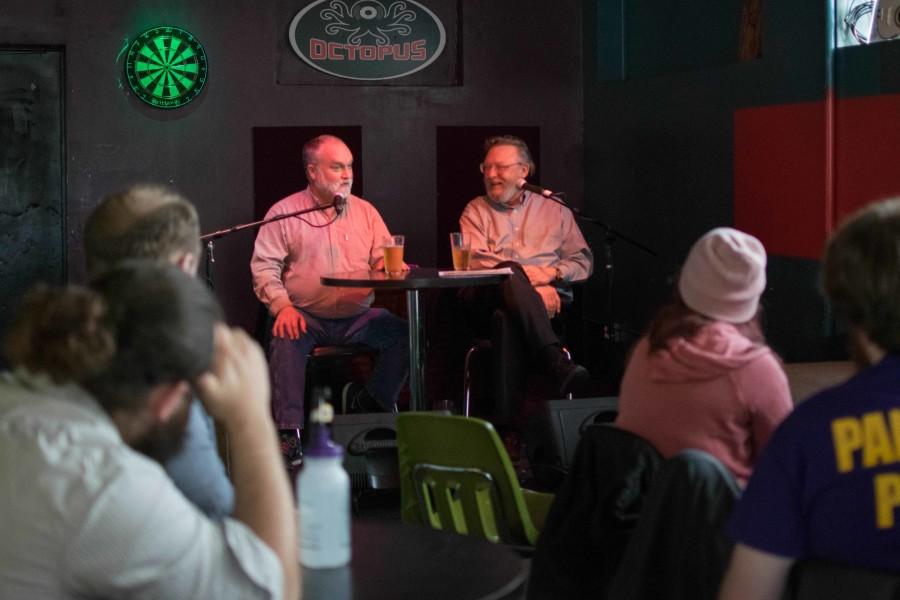 Professors Steve O'Kane (Biology) and Jerry Soneson (Philosophy and Religions) discussed the compatibility of science and religion for the most recent "Pint with a Prof."

UNI Freethinkers and Inquirers (UNIFI) held their monthly Pint with a Prof event at the Octopus bar on College Hill on March 24 at 4 p.m. The event consisted of a lecture and question and answer-based discussion with two UNI professors. The topic at hand was “Religion and Science: Friends or Enemies,” which sparked considerable discussion among those in attendance.

UNIFI had previously explored this topic somewhat in their annual Darwin Week event, which was held in early February. Steve O’Kane of UNI’s biology department and Jerry Soneson of UNI’s philosophy and world religions department were the two professors who presented the lecture and led the discussion.

“The purpose of the event was twofold: to provide discussion and an interesting topic meant to educate, while also maintaining a relaxed environment for the audience,” said Oliverio Covarrubias, junior psychology major and member of UNIFI. “It’s not often you get to have a beer with a professor. The change of environment is also nice, because you get a different crowd and a different mindset.”

The lecture covered topics such as the links between religion and science, how each subject comes with its own distinct worldview and how the two are very compatible while also being very different.

The professors also discussed how the Enlightenment came to be, as well as how the intellectual movement shifted the focus from religious objectivity to subjectivity.

“Science can help religion and religion can help science. They can be good friends,” Soneson said.

In the lecture, he spoke at length about how religion and science are schools of thought that actually impact one another. Soneson also explained how religion can often be viewed as wrong and has historically had to change over time to survive.

O’Kane and Soneson agreed on most topics but still differed on certain viewpoints. Many students in attendance similarly shared their own opinions and asked the professors questions related to the topic throughout the event.

“What’s interesting is the jovial nature in which two professors condensed a thousand or so year argument between science and religion and even referenced how they are probably just as wrong as past thinkers,” Covarrubias also commented about his experience.

The lecture wrapped up with statements focusing on the various theories science and religion can pose and about how they can both still be incorrect.

O’Kane was able to succinctly summarize this last point at the event.

“Everything we believe right now is wrong,” he said.