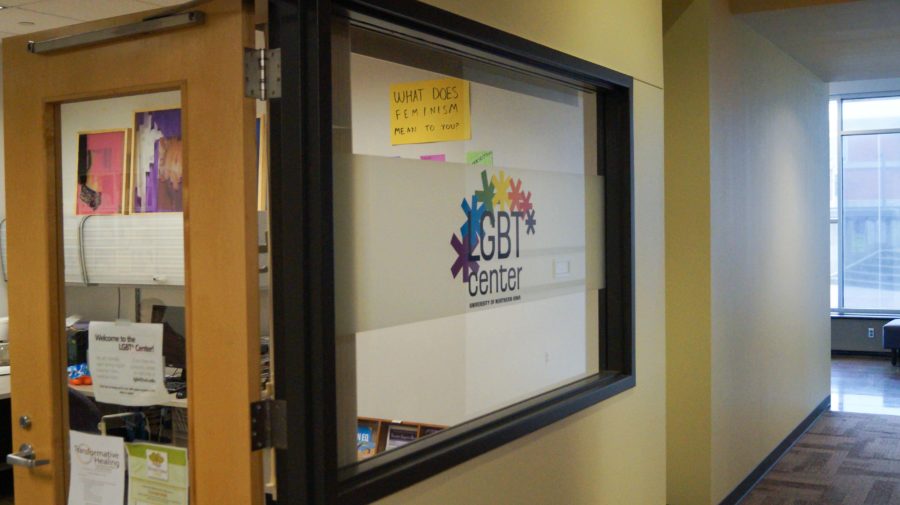 The LGBT* Center, housed in the upper level of the Maucker Union, provides a safe space on campus for LGBT* students

Since Indiana passed House Bill 101, also known as the Religious Freedom Restoration Act, issues concerning the LGBT* community and their rights have received increased visibility in the media.

Multiple states have since followed Indiana, including Mississippi and North Carolina. These bills have had a far-reaching impact, creating concern for some UNI students and members of the Cedar Valley community.

Some UNI students see such laws as problematic.

Sophomore English major, Erin Hankemeier explained her disagreement with the adoption of such bills.

“Just as religion is really important in some people’s lives, I feel that allowing to be who they are is more important,” Hankmeier said.

Hankemeier went on to explain that gender inclusive restrooms and housing are extremely important to her.

The definition of “person” in the bill includes individuals, organizations and companies.

The full language of the bill explains that the government cannot burden a person’s religious freedom, and if they do, that person has a path to address the violation with the government.

Indiana conservatives were the majority of those who pushed for the bill’s passage, arguing that it serves to protect the people of Indiana from any discrimination they would face from the government for exercising their religious beliefs.

Those who oppose the bill argue that it sets the stage for legal discrimination against the LGBT* community in the state.

Mississippi and North Carolina passed similar bills. Both, however, include language that has resulted in them being dubbed the “bathroom bill.”

These bills, although they come in many forms, generally state that transgender persons or anyone of a non-binary gender cannot use restrooms of the gender they identify with, but instead must use the restroom corresponding with their biological sex at birth.

“I think it’s [terrible] because religious people, they wouldn’t want somebody rejecting their rights because they’re religious … and yet, they want to judge other people for their lives,” said Selena Carlson, freshman biology and chemistry double major.

Carlson also said that she believes people do not have the right to discriminate against others because of how they live their lives.

“They’re obviously transphobic… and so [are] many other forms of discrimination,” Publius said.

Publius said that she was both surprised and unsurprised that bills like RFRA are able to pass.

“It really sort of speaks to the failures and tensions within the current political system,” Publius said.

Publius explained that if a bill such as RFRA were passed in Iowa, she and lot of the people she knows would no longer feel safe here.

Publius went on to say that religious views are a very personal matter and that they are a part of each person’s own journey.

At the same time, she noted that it is especially unacceptable to try and dictate another person’s journey through legal channels.

RFRA and laws like it are becoming increasingly contentious, as evidenced by the media coverage they receive and the divisiveness of the issue.

Salt Company, the college ministry of Candeo Church in the Cedar Valley, declined to comment on the issue directly, but added that, “It’s our desire to communicate truth in love. This goal cannot simply be accomplished through a small contributing quote.”