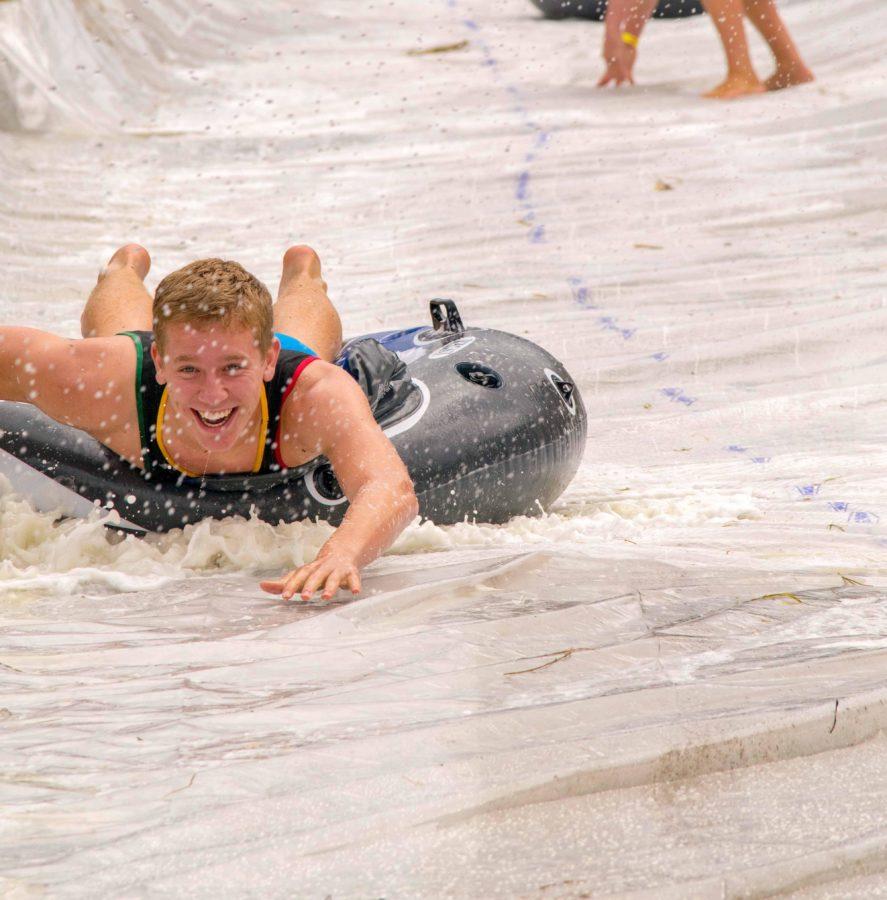 Jace Jirak, sophomore potential business major., slides down the 200 foot long slip and slide. The slide was made of hay bails and plastic sheets

Students got wet and wild after the first week of classes thanks to the College Hill Partnership. They held a kick-off party on Saturday to welcome students back to campus.

The party featured a giant slip and slide, which took up half the length of the Hill.

CHP members set up and constructed the giant slide out of plastic sheets and hay bales earlier in the day.

A live DJ, dunk tank and carnival games were also featured, and the proceeds went to the Boys and Girls Club.

“We wanted to do something that would emphasize the unique qualities of College Hill,” Andy Fuchtman, CHP president and part-owner of Sidecar Coffee Shop, said. “The slip and slide started as a joke, but the more we thought about it, the more it made sense for us. We are on a hill, we’re a place where unique ideas can find a home and we like trying new things.”

Fuchtman continued, “We really just wanted to invite everybody to come down and have a great time to start the school year.

It was pretty hard to pull off, but it was fun working together to do something that most people thought would be difficult/impossible to accomplish.”

Barb Schilf, an owner of Mohair Pair and business member of CHP, said that she thought the event was successful.

“It’s one of those kind of things where your first time is going to have to be a test because you can’t do a test run,” Schlif said. “We kind of had to wing it […] It probably wasn’t perfect, but I thought it was good enough. It brought enough people, and I thought it was a good basis for a new event.”

Some students who were in attendance enjoyed the kickoff party and are already looking forward to similar events in the future.

“There needs to be more things like this,” said sophomore digital media major Roberto Estrella. “A lot of my friends were really excited about it.”

However, some students said that the event didn’t quite meet their expectations. One such student was Jieke Stroobant, junior global marketing major, who said she was disappointed in the size of the slip and slide. Stroobant said she expected it to be the entire length of the Hill.

Makaela Schulz, senior graphic design and communication major, works at Sidecar Coffee Shop on the Hill and was responsible for monitoring the slip and slide.

Schulz expressed optimism for future events, saying, “I think it was a really good idea. I was actually talking with someone earlier about how they should do more events like this because the purpose of it – to promote businesses and stuff – I think that is awesome.”

“I live around here, and it’s just a fun event for the community,” Tucker said. “It brings a lot of people together, and it’s a good way to promote the local businesses on this street.”