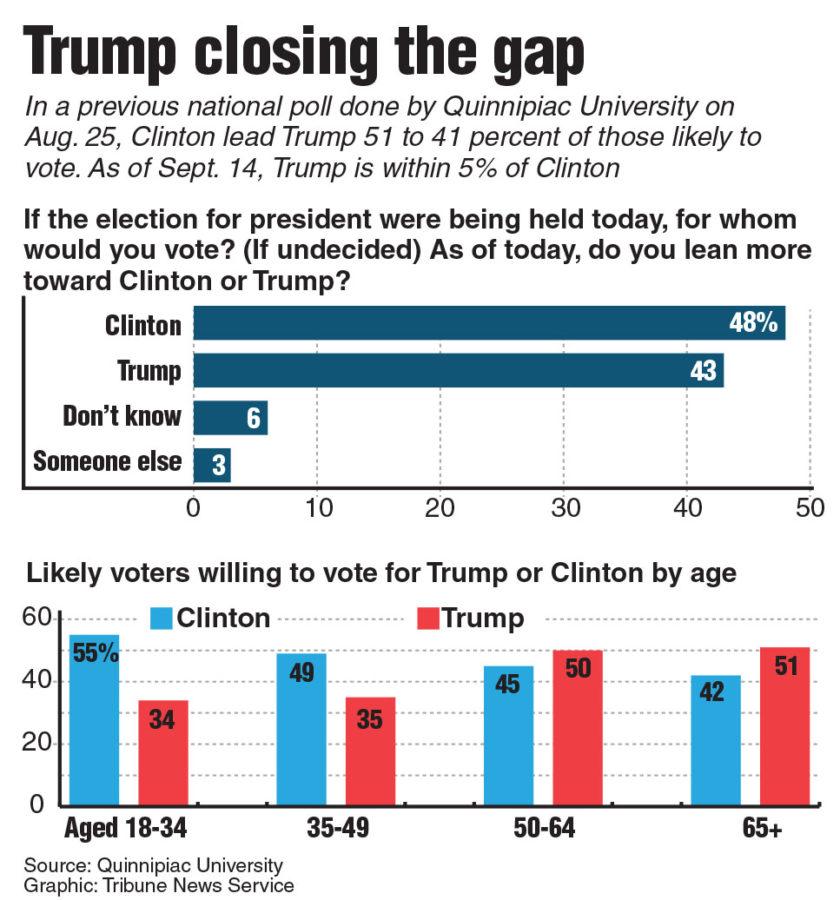 As of Sept. 14, the deficit between Donald Trump and Hillary Clinton has narrowed, according to a national poll. Columnist Cobb advocates voting with an eye to campaign finance reform.

A lot of people are talking about the ways in which the 2016 election is like no other ever before. But there’s at least one way it’s exactly the same.

The extravagant amount of money involved in this election reflects years past. The cost to run for office in America has gone up yet again, and the remaining candidates are yet another pair of white millionaires trying to convince the nation that they know what’s best for them.

This election is on track to cost upwards of $8 billion – more than ever spent on a national election.  As many of you know now, most of that money comes from a tiny group of super-rich donors to ensure their interests are best served, despite comprising a very slight portion of the US population.

Almost none of these donations come from students, young people or the vast majority of Americans.  According to the non-partisan Center for Responsive Politics, big donors dominate our elections – like individuals in the finance, insurance and real estate industries who have already given over $677 million to candidates.

As a college student, this situation is frustrating to me. I’m angry I can’t compete with the political power of the ultra-rich to make my voice heard. To solve national problems like worsening climate change, systematic discrimination and brutality, rising student debt, mass incarceration and growing income inequality, I know we need to get big money out.

Despite my frustration, this year has also provided me with some hope. There seems to be a growing awareness and subsequent outcry from millions of Americans – young and old – who are fed up with repressed political influence. Lots of people, including some candidates, are talking about taking our democracy back from corporations and ultra-wealthy donors. And as a student, I recognize that I have a huge role to play.

First, I can vote for candidates who support real solutions to the problem of big political money. For example, supporting public financing of election campaigns, so ordinary Americans can afford to run for office without depending on mega-donors and owing office positions to their narrow interests. Another example is overturning Citizens United, the Supreme Court decision that allows corporations to spend unlimited amounts of money through Super PACS.

But voting for those candidates isn’t enough. It’s important to make sure they keep their promises by maintaining involvement after the election and advocating for a real democracy – writing, calling, protesting, petitioning, meeting with politicians, using social media, rallies and other ways of holding their feet to the fire.

So, I’m going to begin by voting in November. And while I haven’t solidified who I’ll be casting my vote for, I can promise that the candidates I support will be the ones who support reform of campaign financing to stop big money campaign donors from dominating politics and leaving the rest of us behind.