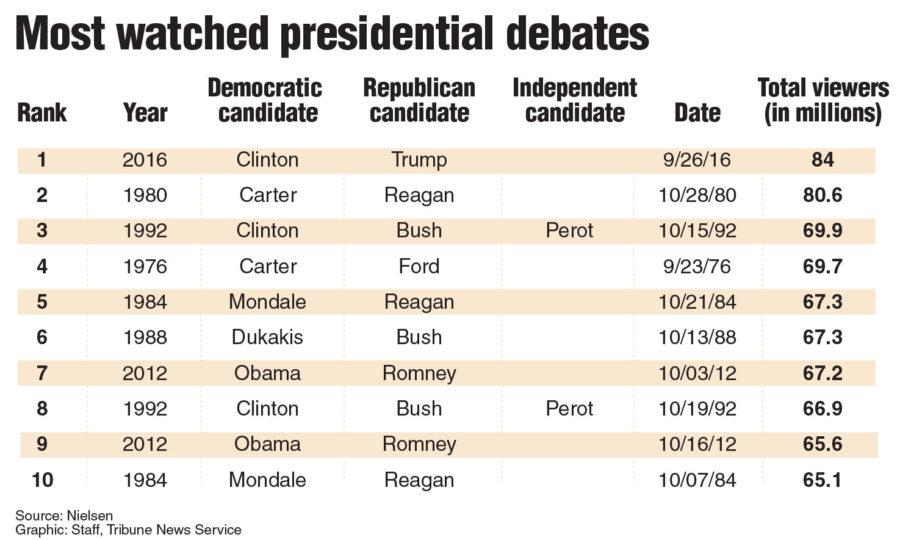 For many on campus, last week’s presidential debate may have been their first, and for many others this will be their first election.

What I couldn’t shake in this debate was Trump’s claims that our allies – most notably Japan – are not financially providing for our military support.

On this subject, it is important to note why Japan in particular is so reliant on US military forces. For this information, we look to WWII.

Article 9 of their Constitution – drafted in English under General MacArthur – states that “land, sea, and air forces, as well as other war potential, will never be maintained.”

This was ratified shortly before the Security Treaty between the United States and Japan.

Japan was forced by the US to renounce war, and then the US placed military installations across Japan to protect Japan, and have convenient Eastern forces.

Japan also cannot have any other foreign troops present without US approval.

Furthermore, this treaty does not require Japan to pay us for our military protection – which it does anyway.

A Sept. 27 article in the Japan Times by Ayako Mie stated that Japan has provided over $1.8 billion in support in 2016 – the highest amount to date.

America exceeds military spending over the next top 10 spenders combined, but we also have many foreign obligations that other states have avoided.

Our foreign military contracts are on us. An inspection of our contracts with Japan show how we dug this hole, and how others are still helping us to get ourselves out where they can.

To be quite honest, I am not particularly concerned with the past couple presidential debates or the upcoming ones. This 2016 election, although pivotal, has forced me into a corner of indecision – there is no clear choice.

Others would disagree, arguing that Donald Trump is not a feasible option. I would’ve agreed as part of the Twitter #NeverTrump campaign, but I was also a member of the #NeverHillary crowd.

So when both of my never options won their respective tickets, I was forced to take a look at #NeverNotTrump.

There was never a point in time where the possibility of voting for Trump was on my radar, but it wasn’t for the same reasons the media often mentions. Trump is still paraded out like a racist, sexist and generally crazy person – all of which are debatable character attacks. My problem with Trump was and has always been his inability to hold up any conservative values.

One of the main ways Trump disappoints in policy is with identifying both health care and education as responsibilities of the federal government, according to the National Review, which are policies conservatives rather leave to the states. Also his constant flip-flopping on his views of Planned Parenthood doesn’t bode well for really anyone who cares about the issue from any side.

The debates may make for good dinner theater, and to some undecided voters it may help them come up with a conclusive decision. But for people with established political ideals, I’m afraid there’s nothing more this 2016 election can offer you.

Hillary Clinton: “It’s really unfortunate that [Trump] paints such a dire, negative picture of Black communities in our country.”

For a half-century, the Democrat Party (and progressives, broadly) has consistently maintained majority (in many cases, unitary) control over our largest, most influential cities. It is they who have overseen the plight(s) of racial minorities, particularly blacks. It is they who have failed the black community regarding the prevalence of violent crime, the absence of gainful employment, the maintenance of urban infrastructure (see Flint) and many other issues.

They have done (or not done) all this while decrying the lack of progress towards racial equity and blaming their political opponents for it. Now, the 2016 GOP presidential nominee speaks to the black community openly and honestly (a party rarity) about their hardships, points out the fact that they have been voting for the same party again and again while expecting different results, and offers himself and his party as an alternative to consider. This is met by Secretary Clinton and her party with, not a “Welcome to the table, let’s talk,” but something akin to, “Oh, silly Donald, blacks don’t have it that bad in America!”

By chastising Trump like this, Clinton has unwittingly given away the game. Democrats and progressives are secondarily interested in advancing the black community. Their primary interest, rather, is political power, and achieving it by using legitimate (and illegitimate) grievances to manipulate the black community into voting for them.

A bombastic businessman managed to trick the 2016 Democratic presidential nominee into tacitly admitting this all during the most watched election debate in television history.

What a time to be alive.

While there are no amount of words to suffice my reaction to the debate, I can say that I was not surprised by the candidate’s performance.

Throughout the night, I could not help but both snicker and shake my head as time and time again we heard, “Wrong!” being professed by Donald Trump. Apart from a presidential candidate giving such a puerile response to Hillary Clinton and mediator, Lester Holt, this declaration gets us nowhere. Even if he was objecting to an inaccuarte statment by Clinon, declaring its fallaciousness without further providing an alternative is pointless.

It is evident by his eager inclination to assign guilt and simply point out flaws, that he is not worthy of leading this nation. Our president needs to have the ability to not only identify the problem, but to solve it through constructive means.

As the face of America, the President of the United States requires a particular decorum, especially when addressing leaders of other nations. I am quite certain Trump would not only embarrass Americans, but also endanger us with his flippant demeanor.

If Trump doesn’t soon drop the balderdash and start offering up some real answers, I should hope that voters finally come to realize he is simply not fit. (Or should I say he doesn’t have “The Look?”)

If you take away his adjectives, he is nothing. He provides broadly stated agendas and walks his way around topics that he knows nothing about.

Choosing Donald Trump as president would be, to put it unintelligently, “Wrong!”

Despite the severe apathy I feel toward the remaining presidential candidates, I watched the first debate between Donald Trump and Hillary Clinton on Monday night. My expectations were low. I didn’t anticipate hearing anything new, considering the election is just over a month away and they’ve had more than a year to say what they needed to say.

But this didn’t keep my ears from perking up when Lester Holt posed the question, “Do you believe that police are implicitly biased against black people?” first to Secretary Clinton.

This particular issue and other issues relating to racial inequality are important to me and are arguably among the most pressing topics in this entire election cycle. In that split-second between the question’s delivery and Hillary’s response, I abandoned my apathy and mustered up every remaining bit of hope and faith that I had and I placed it with her.

I thought she could really impress me with this answer. I mean, it’s a yes-or-no question, right? All she has to do is say “Yes” and back it up with what’s going on in the criminal justice system.

“Lester, I think that implicit bias is a problem for everyone, not just police,” Clinton said.

And with that I returned back to my solemn state of being thoroughly unimpressed and bored with the Democratic candidate – a candidate that seems never to delve too far into an answer that might upset her conservative Democrat voter base.

While the statement she provided is something I agree with, the answer was lame and did not vehemently address a problem that so desperately plagues the concerns and bodies of American people. What this answer did was distract from the core issue at hand – police brutality at the expense of black men and women.

She undermined the problem by giving police a break and applying the issue of implicit bias to all people.