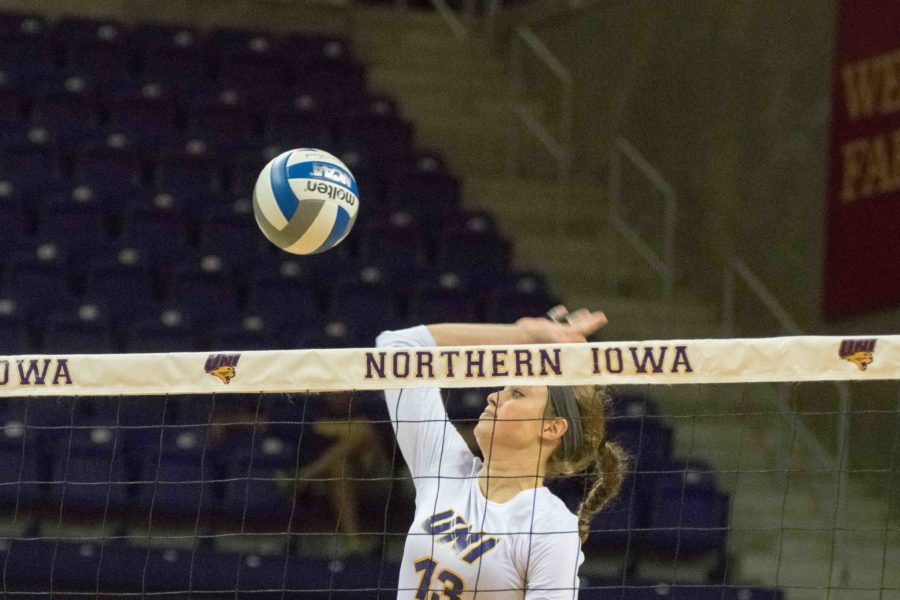 After five sets, the UNI Volleyball team has achieved a season long win streak of five games in a row.

A two-game road trip to Illinois resulted in a pair of Panther wins. UNI started out the weekend on Friday by sweeping the Bradley Braves by a set score of 25-16, 25-15 and 25-21.

In the first set against the Braves, UNI managed to scrape to an 8-7 lead before proceeding to dominate the rest of the set.

The second set played out much the same as the first.UNI fought for an early lead then relatively coasted to the end. While the final set was the closest, UNI never trailed and was tied only twice at 3-3 and 9-9.

Seniors Amie Held and Kayla Haneline led the offense with 12 and 13 kills, respectively. Sophomores Kendyl Sorge and Bri Weber held it down on defense with 16 and 12 digs apiece.

Coming into the match against the Ramblers, UNI was 1-3 in five set matches; those three losses are also all three of UNI’s Valley losses. In the first set UNI was able to obtain a 9-8 lead, but the Lady Panthers couldn’t get enough of a foothold.

The fourth set saw Loyola start off fast — and were never threatened. For the second time this year, UNI never trailed in the fifth set and overcame their kryptonite by winning their sixth MVC game, 15th overall.

Held and Weber both recorded their 12th double-double of the season. Held had 15 kills and 17 digs, Weber 19 kills and 10 digs. With them both leading the team in double-doubles, UNI is now 13-0 against Loyola.

With these two wins UNI moves to fourth in the Valley. They trail first-place Wichita State, Missouri State and Southern Illinois. UNI has beaten WSU, but lost to the other two in five-set matches.

They are one game behind the second and third place teams and just one and a half behind WSU. The Panthers can change the lay out this weekend at McLeod as they play Southern Illinois this Saturday after a Friday home stand against the Evansville Purple Aces.

Add in that Missouri State plays WSU, and the Valley could see a new top three order.