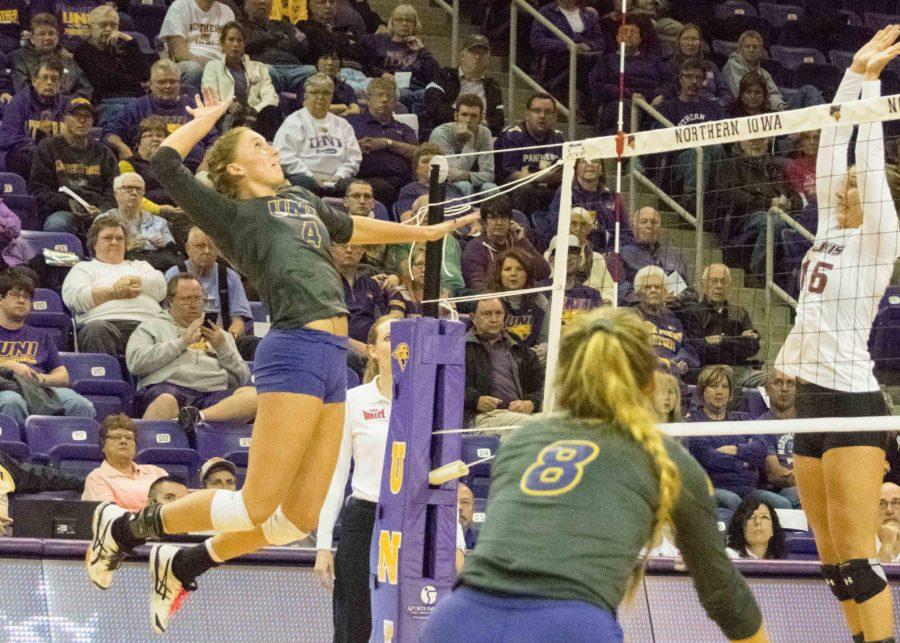 Bri Weber (4) and Ashlee Sinnott (8) set up for a spike against Evansville on Family Weekend. Weber has scored 290 points and recorded 259 kills on the season.

The UNI volleyball team was able to garner their sixth and seventh straight wins this weekend by beating the Evansville Purple Aces by a set score of 25-14, 25-10 and 25-14.

As they did in Evansville, UNI stifled the Aces offense and smashed down their defense. This match lasted only a few minutes longer than their last meeting, an hour and 10 minutes versus an hour and 15 minutes.

This victory allowed UNI to get everyone invovled, including some of the team’s younger players. 15 of the 17 total players on the roster saw action in at least one set.

The first two sets against the Salukis went as well as could be expected. UNI scored first in both sets and even managed to get out to a 10-point lead at least once in each set. They also never trailed in a set, until the first point in the third.

While in the third set, SIU scored first and got out to a large lead. The biggest difference was that the Panthers surged to tie the game, late, on several occasions. The final set saw early back and forth action until UNI got in front 7-6 and never looked back.

After losing to SIU early this year, the Panthers definitely showed out for their parents in attendance on Family Day. Senior Amie Held put on a show as she recorded the only double-double for UNI with 11 kills and 13 digs.

She also had a team high: three aces and assisted on one block. Sorge also recorded an ace as well as a match-high 19 digs.

With these wins and Missouri State’s upset of Wichita on Friday, UNI is now in third place in the Valley and are only a half-game behind both of MSU and WSU who are tied in first.

Next weekend could prove to be the most difficult and important games for all three of those teams. UNI plays WSU on Friday and MSU on Saturday. If UNI wins on the weekend, they would be at least tied for first, depending on if SIU also wins both of their games.

After next weekend, UNI plays five teams; four of which UNI have already beaten — their one loss came from Illinois State.

If UNI wins their eighth and ninth straight games next week, they will most likely win the Valley.