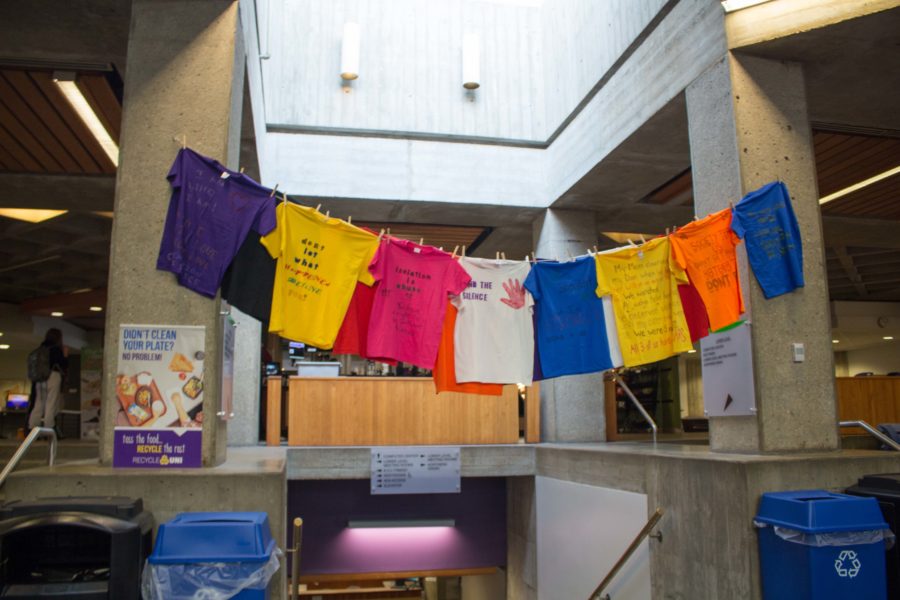 T-shirts with messages such as: "It's not consent if you make me afraid to say no" hang in the Maucker Union. UNI's Women's and Gender Studies program partnered with Student Wellness Services for the Clothesline Project last week.

A line of colorful T-shirts arched across the entrance to a stairwell in the Maucker Union. Busy students hurrying to class walked by them, sometimes without giving them a cursory glance.

But if they’d stopped to read them, they would have seen that the rainbow of T-shirts contained powerful messages.

“It’s not consent if you make me afraid to say no,” read a message on a yellow T-shirt.

Another told a story of familial abuse.

“My Mom divorced my Dad when he hit her within an inch of her life. We watched,” read the tee.

“A judge told her that he deserved visitation until my sister and I were 18,” continued the message on the shirt.

“All 3 of us have SCARS,” the messaged concluded.

The Women’s and Gender Studies program at UNI partnered with Student Wellness Services to participate once again in The Clothesline Project for Domestic Violence Awareness Month.

“The project’s main goal is to raise awareness for violence against women, and other marginalized communities,” said Anna Blaho, a women’s and gender studies graduate student.

Students were invited to decorate t-shirts in Maucker Union and the WRC throughout the week and the shirts were displayed beginning late Thursday afternoon.

The World Health Organization has reported that one in three women all around the world have or will have experienced physical violence or sexual violence by an intimate partner or a non-partner during their lives.

Blaho said students participated in decorating a t-shirt of their choice and could express themselves in their own way.

“They are able to decorate it with pictures and words depicting their thoughts, feelings and emotions as a survivor or as an ally against violence,” she said.

Each T-shirt color symbolizes a different type of violence against women. For example, choosing a yellow shirt would represent a battered or assaulted woman. Students could select the color of shirt they wanted and felt was most representative of their experience.

“Even running this program […]  it’s hard to believe some of the acts of violence that people have experienced in this world, so we just want to do our part in making sure that people acknowledge that this isn’t just something that happens on TV or is dramatized for effect,” Blaho said. “This is something that happens to real people and it’s an issue that needs to be heard.”

Claire Guderjahn, a sophomore theater and communication double major participated in the event by decorating a T-shirt.

“I feel that the clothesline project is such an important way to spread awareness and love throughout campus,” Guderjahn said. “There are so many survivors who deserve to feel appreciated for who they are and what they’ve been through. I’m thankful to be a part of this comforting initiative.”

Brenna Wolfe, treasurer of the UNI Feminist Action League, said, “The clothesline project is really important because it gives voices to survivors of gender-based violence and brings awareness to domestic violence and sexual assault. This project allows individuals to bear witness to the experiences of survivors.”

The next event UNI Women and Gender Studies program will put on is a forum called, “Towards an Ethics of Care: Ecofeminism, Taxidermy, and Animal Portraiture in Contemporary Art,” featuring associate professor of art history Elizabeth Sutton. It will be held on Nov. 7 at 12 p.m. in Rod 287.