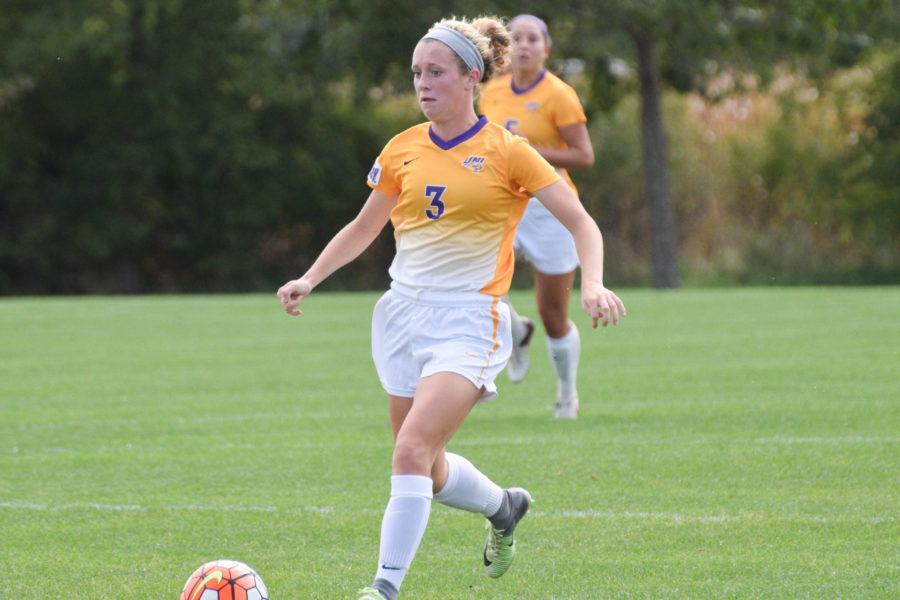 Sydney Hayden (3) finds some room to dribble up-field against Viterbo University. UNI finds their regular home season record at 7-1-1 after their only loss to Iowa State University

On October 23, 300 excited fans showed up to the Cedar Valley Soccer Club field in Waterloo to witness the instate rivalry between the UNI Panthers and the Iowa State Cyclones.

After a hard-fought contest, the Panthers would eventually lose their first and last home game of the season with a final score of 1-0.

The only goal of the night was scored in the 67th minute of play by Iowa State’s Klasey Medelberg, her third goal of the season.

The first half of the game saw Iowa State outshooting UNI 5-0. It was not until the second half of the game when UNI began their offensive attack, attempting four shots compared to ISU’s seven.

Sydney Hayden, Kelsey Yarrow, Camille Dela Cruz and Sarah Brandt were the only Panther players who took shots against the Cyclones. Yarrow was the only player to record a shot on goal.

Whitney Blunt played the entire 90 minutes of the game and allowed only one goal after recording three saves.

Of ISU’s 12 total shots, Blunt was able to save the three attempts that were actually on goal. With only one game left in the regular season, Blunt has totaled 28 saves with a .651 save percentage.

After their loss to Iowa State, UNI advances to 8-6-3 with their final game featuring an away game against Illinois State. The Redbirds are currently undefeated in the MVC with a record of 4-0-1 against teams in the Valley.

Illinois State has won seven of their last eight games. Their contest against Missouri State was the only game that resulted in a 1-1 tie.

This is significant improvement for a team that was 1-4 in their first five games of the season.

Some of the Redbirds’ top scorers consist of Lauren Koehl who has scored 14 goals, Kelli Zickert, Mikayla Unger and Abby Basler follow closely with five goals on the season.

The last game of the regular season is a big one. The Panthers will take on the Redbirds today at 6:00pm.