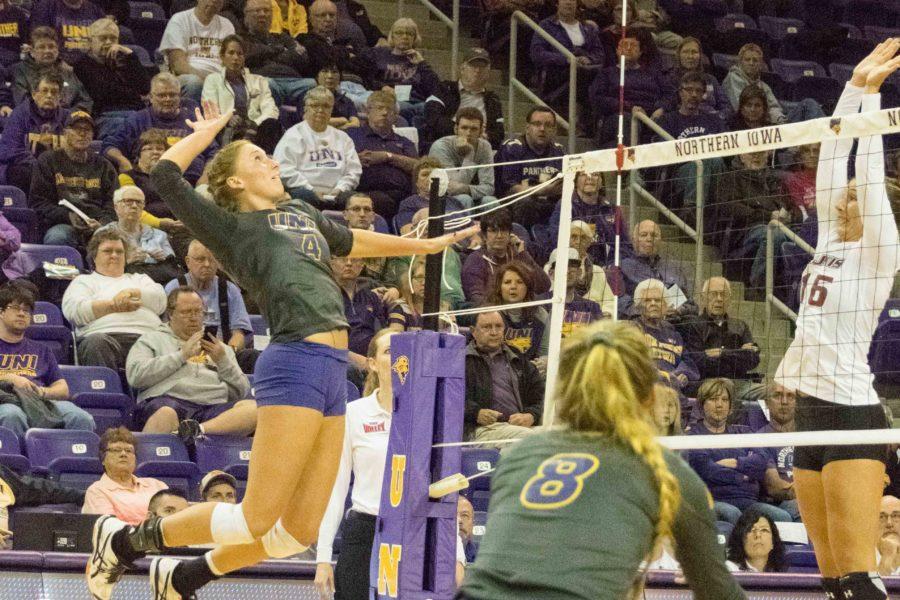 Bri Weber (4) and Ashlee Sinnott (8) set up for a spike. The Panthers secured an invitation to the Missouri Valley Conference tourney with a weekend match win.

The UNI volleyball team was able to secure an invitation to the Missouri Valley Tournament, which UNI is hosting starting Thanksgiving Day. They secured the invite by guaranteeing that they’ll finish at least sixth in conference play this year.

The first set went fairly smoothly for UNI, and despite an early deficit, UNI took a 6-5 lead and never really looked back. The second set saw a strong UNI attack at the start; mid-set however, saw a back and forth battle that saw multiple ties and lead changes.

A 7-0 run by UNI permanently gave them the lead at 20-14. The third set saw UNI gain a 1-0 and they never squandered it. An 8-0 run early on gave UNI a 12-3 advantage. That run also saw senior Amie Held serve three of her four aces. For the third set in a row UNI won on the first set point.

Along with the four aces, Held tallied a double-double with 10 kills and digs. Her four aces were only a fraction of the total aces scored. Senior Ashlee Sinnott tied Held with four aces and the last two were recorded by sophomore Bri Weber.

It was the most aces a Panther team has recorded since 2010. The only other Panther with a double-double was sophomore Heather Hook who gathered in 28 assists and 13 digs.

Next weekend will be the end of the regular season in Cedar Falls. UNI plays Loyola on Friday, Senior Night will be Saturday versus Bradley. UNI has defeated both of these teams earlier this year, they swept Bradley 3-0 and edged Loyola 3-2.

The seniors that will be honored Saturday will include; Amie Held, Ashlee Sinnott, and Jaidyn Blanchfield. Other possible seniors that might leave after graduation are red-shirt seniors Kayla Haneline and Lindsey Schulz.

Both still have a year of eligibility left. UNI will still have two more games after next weekend, at Indiana State and at Illinois State. With two weeks left UNI is currently in fourth place in the Valley, the team has now reached crunch time.

The next two weeks are important for positioning and will give UNI a chance for a special run.