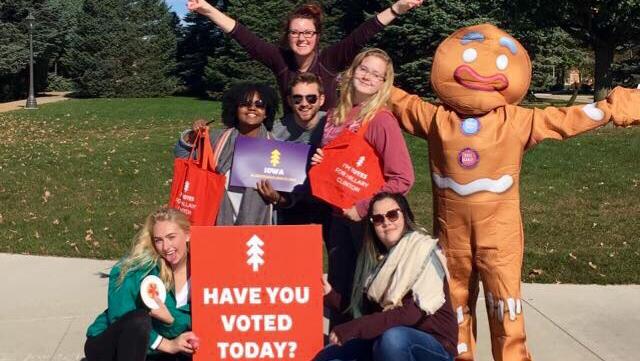 The political action group NextGen Climate has fought to make climate change a focal issue of this election.

As many students have likely noticed by now, there is an abundance of orange clipboards and T-shirts around campus. The political action group NextGen Climate has made it their mission to turn out young voters and bring climate change to the forefront of this election.

“Millennials will have to deal with the worst effects of climate change,” said Tessa Lengeling, Next Gen Climate’s Iowa communications director. Lengeling urged young voters to recognize the importance of their vote and pick a candidate who has a plan to combat global warming.

Although the organization claims to be nonpartisan, one student questioned their promotional tactics.

“How can they claim not to support a particular candidate when they are clearly bashing the Republican nominee?” said Lauren Swan, a sophomore Spanish and biology double major. “That doesn’t look like a nonpartisan group to me.” Swan was referring to the #StopTrump slogan that NextGen has taken on.

Lengeling affirmed that the group is nonpartisan but explained the need to support candidates who recognize the adverse effects of climate change.

“The only candidate who has a strong clean energy plan and knows how critical it is to combat climate change is Hillary Clinton,” Lengeling said.

Lengeling went on to say that if Donald Trump were to become president, his plans would counteract the efforts made thus far to tackle climate change, saying that it would be “disastrous for our environment and our economy.”

When asked what members of NextGen will do if Trump gets elected, Robert Sales, the president of NextGen’s UNI chapter, said, “I do not know at the time, but the continued battle to raise awareness of climate change will continue.”

No matter the outcome of the election, NextGen Climate is adamant in their efforts on UNI’s campus and across the state to turn out voters. Some students, however, are impartial to their presence.

“They go a little overboard with their persistence,” said Allie Marchesano, a sophomore English education major. Marchesano said she likes what the group is promoting, yet is slightly put off by their strategy.

Recently, the group has been putting on events featuring cookie and pumpkin decorating, inflatables and puppies. Lengeling said they see highly enthusiastic students show up to these events who are engaged and pumped up to vote.

According to the Pew Research Center, millennials make up approximately 31 percent of the population that is eligible to vote. That is roughly 69.2 million people across the country. NextGen’s objective is to educate those potential voters about how they can get their voices heard.

“In order for millennials and other generations to have a healthy environment and prosperous economy, we must elect leaders who have a clear and concrete plan to combat climate change and transition to a clean energy economy,” Lengeling said.

The group launched its campaign in 2014 with the main focus of preventing climate change through public policies, according to the NextGen Climate America website. Since then, they have focused in on key states where the millennial vote is critical in determining the outcome of this election.

As Iowa is known to be a swing state, NextGen Climate has established themselves in several locations across Iowa, including college towns Ames, Iowa City and Cedar Falls. The organization has a presence on 23 campuses and has a post in Des Moines that acts as their headquarters.

Election day is Tuesday, Nov. 8, and polling stations will be open from 7 a.m. to 9 p.m. across the state.