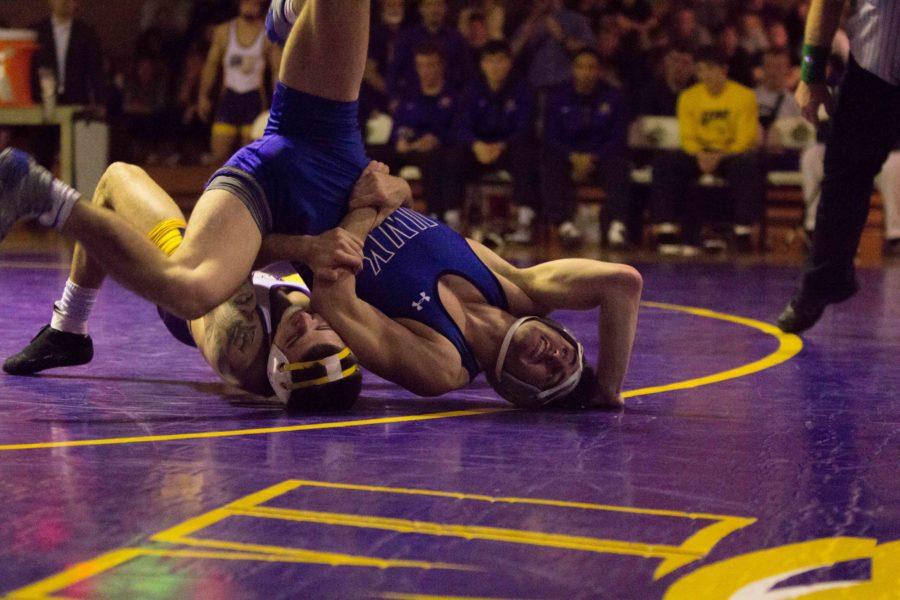 UNI wrestling has officially begun its regular season after starting their home opener with two wins. In the West Gym on Nov. 11, the Panthers came out on top against the University of Nebraska-Kearney (UNK), 43-0, followed by Utah Valley with a final effort of 24-12.

In their 43-0 victory against UNK, Jay Schwarm got the night going for UNI after he pinned Vlad Kazakov just seconds over the one minute mark. Wrestling at 149 lbs, Max Thomsen then pinned Walker Johnson two and a half minutes into the match.

Those were the only two falls UNI had against UNK, but the Panthers continued to show their dominance throughout the night.

They won every match in their first contest and did not allow anyone on UNK to score more than six points.

Josh Alber built up almost two and a half minutes of riding time in the first period against UNK. He then proceeded to earn a 15-1 major decision for his first match of the night. In their contest against Utah Valley, Alber got the first points of the night for UNI after he beat Jarod Maynes with a final score of 20-11.

After Thomsen’s fall in his first match, he followed with three minutes of riding time and earned himself a major decision, 15-5.

157 lbs Bryce Steiert represented UNI for the first time this season. A 7-4 decision against Raider Lofthouse would result in a 14-3 UNI lead, just five matches into the dual.

After a strong start to the regular season, UNI will compete in the Harold Nichols Cyclone Opener.

Their next home meet will feature sixth ranked Virginia Tech on Nov. 18 in the West Gym. following the dual, UNI wrestlers will be signing autographs for any excited fans.