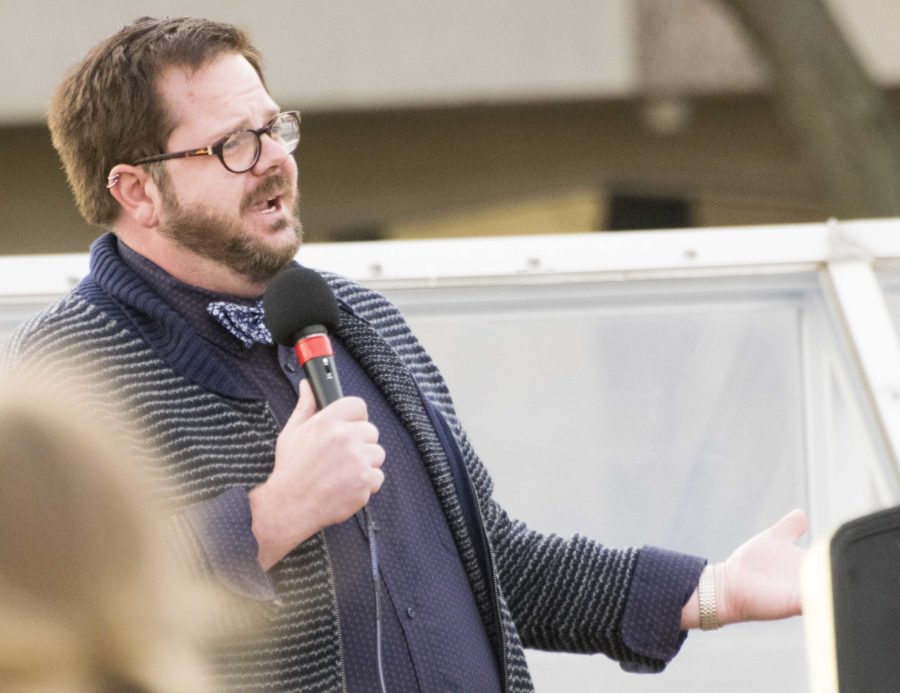 Students and community members gathered on top of the Maucker Union in solidarity. Recently elected Black Hawk county board supervisor, Chris Schwartz, was one of the several to speak at the rally.

As some UNI students continue to come to terms with the result of the US presidential election, Sabrina Santos, a senior economics, finance and history major, organized a rally that encouraged students to make their voices heard.

The rally took place yesterday afternoon on the Maucker Union rooftop. Roughly 50 people were in attendance.

The rally, dubbed “United We Stand,” was peaceful in nature. Students, graduates and faculty showed up with signs showing solidarity with groups they see as negatively affected by the election results. The rally played music and hosted progressive speakers throughout the afternoon.

“The United We Stand Rally is meant to make an anti-hate and anti-intolerance message,” Santos said. “We really want to focus on utilizing our civil rights in a productive way. Utilizing our voices in order to stand in solidarity with all diversity, whether it’s gender, race, religion, ethnicity, whatever you want to call.”

According to Santos, the rally was intended to be a vigorous anti-Donald Trump protest in the early planning stages, but the rally evolved into a more positive message as planning progressed.

“We wanted to just drop that altogether and focus on our community as one, and coming together as a whole,” Santos said.

“I was concerned, and I’m still concerned, because as a student – I’m an international student – considering the fact that immigration policies might change,” Wambuu said.

“Considering the fact that what [Trump] was talking about – what he was saying during his run – a big concern is living in a community where you know they voted for him,” Wambuu continued. “I’m not sure if they are okay with what he said, or if they have a different opinion.”

“Last Tuesday, that election shows that the majority of America doesn’t care about minorities,” Ehrhardt said. “It’s more concerned about themselves, and saw progress and decided that’s not what they wanted. They didn’t want it; they wanted to revert back.

“For me personally, the most important issue is LGBT issues, because that’s what affects me. But also in terms of immigration, and minorities, that’s extremely relevant because we’re way more diverse than we were,” Ehrhardt said.

Several members of the Cedar Falls community spoke at the rally, including students, graduates and local politicians. Among them was Chris Schwartz, the first openly gay person to serve on the Black Hawk County Board of Supervisors and State Senator Jeff Danielson.

Various other speakers discussed issues important to them, including college affordability, climate change and minority rights.

Riley Cosgrove, a fomer UNI student, spoke at the rally, saying, “As a gay man, I am genuinely fearful of what is about to happen in this country.”

While emphasizing the need of affordable college in the United States, Cosgrove later added, “My friend in Paris is getting his masters for free.”

The protest quietly concluded around 5 p.m.