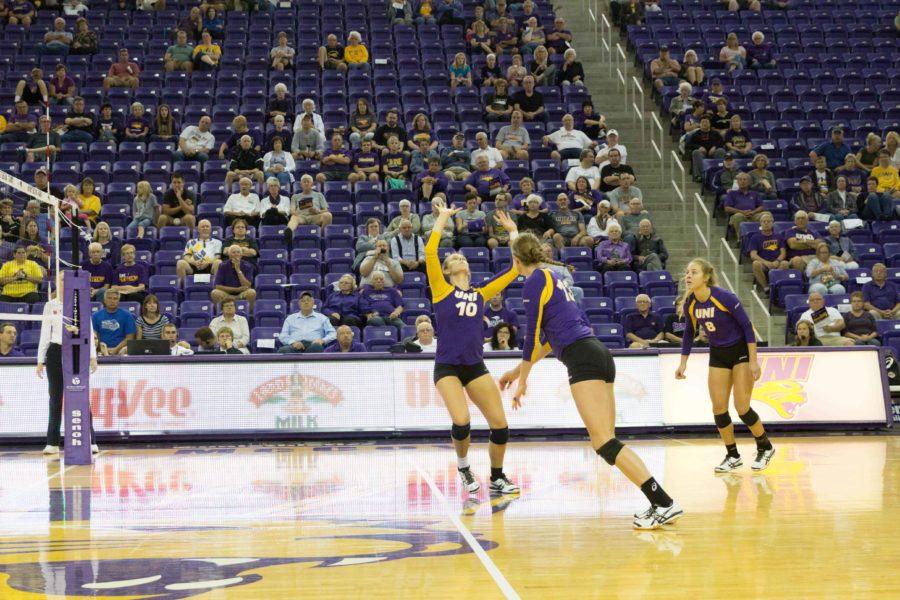 The UNI volleyball team’s 2016 campaign came to an end this last Thursday, as the Panthers lost a heart-breaker to the Creighton Blue Jays in five sets.

To get to that point in the season a few things had to happen first, namely the Missouri Valley Conference Tournament.

UNI won their first-round match by sweeping Loyola on Thanksgiving Day, with a 3-0 final. UNI then lost to eventual tournament champion Wichita State, 1-3.

The opening set versus WSU was nearly flawless for the Panthers, as they won it 25-12 and rarely trailed after the fifth point. UNI almost pulled out the second set, would win the 24-23 set point and still lose 26-24.

The third set saw many Panther runs negated as WSU stayed close and surged late to take it 26-24. The final set was all WSU as they finished strong on the last set 25-26. Three Panther double-doubles were recorded; Held had 14 kill and 16 digs, Weber had 15 kills and 18 digs followed by Hook who had 47 assists and 18 digs.

UNI traveled to Lawrence, Kansas to face the 21st in the nation Jays for the second time this season, UNI lost the first in straight sets. The first two sets saw the teams tied midway, but both times Creighton pulled away with a late run to take both sets; 25-16 and 25-20.

The third set looked to be the last as UNI was down 24-22, but a four-point run, which saw three kills by sophomore Piper Thomas, that helped keep UNI in the game.

The Panthers kept the momentum rolling for the fourth as they forced set five with a   25-14 win. A slow start to the fifth doomed UNI as they played catch up, but they never took a fifth set lead. They managed a tie at both 7-7, 10-10 and 12-12 points a piece. Weber managed the lone double-double for UNI, with 12 kills and 10 digs.

And that is how the season, and for five seniors, a college career ends. It was a near comeback against an “on paper” better team in five sets. This was the 20th tournament visit for UNI, who completed their 34th 20-win-season at 24-10.

UNI was also the national leader in digs per set this year. A great season hindered by the fourth five-set loss of the season.