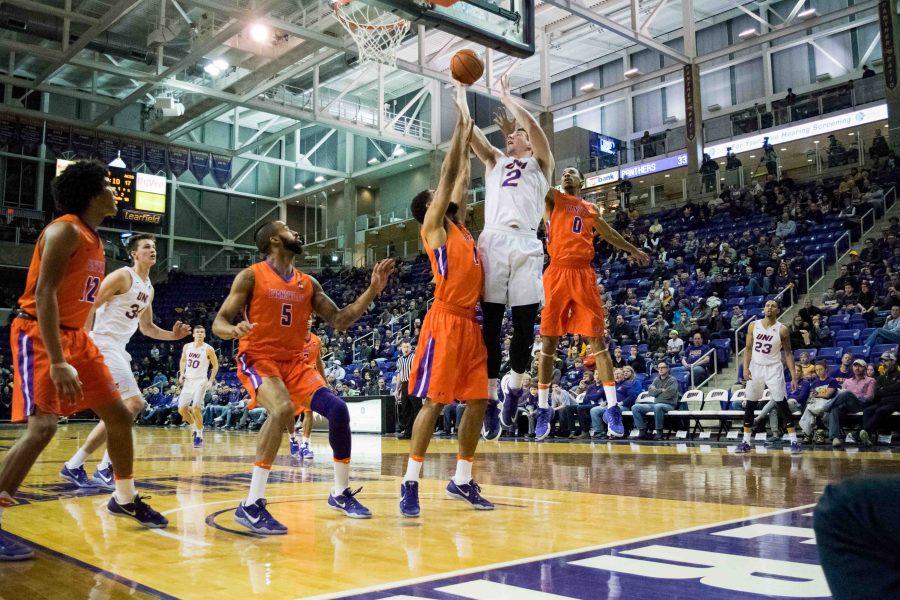 On Saturday, January 28, the UNI men’s basketball team traveled to Des Moines to take on the Drake University Bulldogs. The game started around 1:05 p.m. within the Knapp Center and by the end of the day, the Panthers would return to Cedar Falls with a 71-63 victory in the books.

This victory would increase the Panther’s record to 10-11 on the regular season, 2-6 while playing on the road and would even out their Missouri Valley Conference (MVC) standing at 5-5. The team has now won five games in a row after coming off a tough seven game losing streak in early January.

During the first half of the game, UNI had a higher shooting percentage than Drake from anywhere on the court. The Panthers would head to the halftime break shooting 42.3 percent from the field, 10 percent from downtown and 100 percent from the charity stripe after making their  two free throws of the half.

During the second half of the game, the only missed baskets Klint Carlson had were at the free throw line. Besides going 1-4 at the stripe, Carlson finished the half shooting 3-3 from the field and two of those shots came from deep three-point territory.

The second half also featured Jeremy Morgan, who made 8-10 of his free throws and Bennet Koch who shot 4-4 off inside layups and mid-range jump shots. Koch knocked down his only free throw attempt when he was fouled during his drive to the basket.

After Koch made his layup and recorded the “and one” free throw, the Panthers would lead 61-50 with just three minutes left to play in the second half.

Morgan had the final free throws of the night and would increase their lead to 71-61 before Graham Woodward from Drake made a quick bucket from the field to cut the Panther lead to single digits. UNI would still emerge victorious, holding on to the ball and letting the clock run down as the final seconds ticked away.

The team’s next contest will be on the road against Illinois State on Wednesday, followed by a home game against Indiana State this Saturday. The Panthers have eight regular season games left until the State Farm MVC Tournament takes place in early March.