A loving madness of nature & art 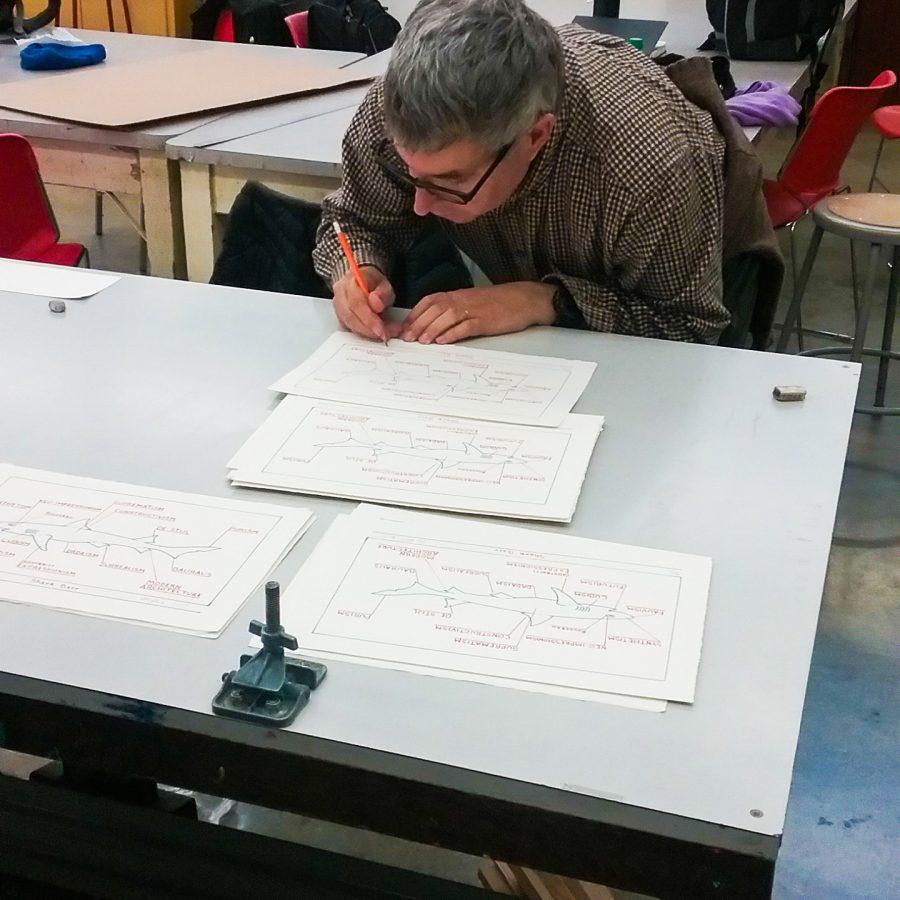 Visual and conceptual artist Mark Dion gave a presentation at the Kamerick Art Building on Thursday. Dion worked with printmaking students and faculty the following day.

The Kamerick Art Building’s auditorium was packed with students Thursday night as visual and conceptual artist Mark Dion gave a presentation about his work and career. Dion was brought to UNI as part of the Meryl Norton Hearst lecture series.

“My work is really about looking at the culture of nature – so the ideas of how we’ve evolved our concept of what the natural world is, what our obligations to it are [and] how that has changed as society changes,” Dion said. “I am looking at my work as a kind of consideration of the social construction of nature, but through visual culture and through material culture.”

The Hearst lecture series allows different departments at UNI to bring in more well-known speakers and artists. Dion’s work is sculptural in nature and incorporates the methods of different scientific disciplines, such as archaeology.

In addition to giving the presentation on Thursday, Dion also worked with printmaking students and faculty on Friday to make a screen print and a lithograph from some of Dion’s original drawings.

In his lecture on Thursday, Dion talked about many of the works that he has done over the years in a variety of countries such as Italy, Germany, Norway and the United Kingdom. Many of the projects involved some kind of archaeological digs and collecting and exhibiting found objects.

“I wanted to bring in Mark because he is one of the artists who has influenced me most over the years. His projects are complex and engaging, both visually and conceptually,” said Noah Doely, assistant professor in UNI’s art department. Doely was instrumental in bringing Dion to campus.

“Noah invited me and I was very happy to receive the invitation,” Dion said. “I remember from when I was a student how important it was to see other artists and be exposed to other kinds of practices.”

Dion’s work encompasses numerous site-specific and research-based projects. One of his notable works is “Neukom Vivarium,” a mixed-media installation work in the Olympic Sculpture Park in Seattle, Washington that features a 60-foot tree that fell down outside of Seattle. The tree is currently housed inside a greenhouse, which holds its own ecosystem. The greenhouse replicates the forest’s environment, and visitors are given a field guide and magnifying glasses in order to take a closer look.

Many of his other works use birds as their subject matter. Dion described himself as a passionate bird watcher, saying, “It’s a way an ambitious systematic person can deal with the natural world.

“I think birds are a great indicator species,” Dion continued. “The health of bird populations tells us a lot about the health of the planet in general, and there’s a long artistic tradition of artists looking at birds and using birds. And that includes everyone from Joseph Cornell to Audubon, and so I feel very much like a part of that tradition.”

“To become more acquainted with his work as a student is really exciting because to see his images and hear the process of such intensive, research-based, site-specific work really illuminates not only the labor, but the loving madness of that scale of projects,” Margarett said. “It makes it all that much more interesting, especially since many of the themes he addresses in his work are more relevant than ever.”

“I think the most important thing that one must do is be incredibly diligent and actively pursue one’s profession,” Dion said. “The art world is an insanely competitive place. It’s extremely difficult, so you have to throw yourself at it with that kind of energy and commitment. You have to be all in. There is no sitting on the fence.”

“This has been a […] great opportunity for me,” Dion said. “The school has been really wonderful, and the students I’ve been working with […] are fantastic and dedicated.”