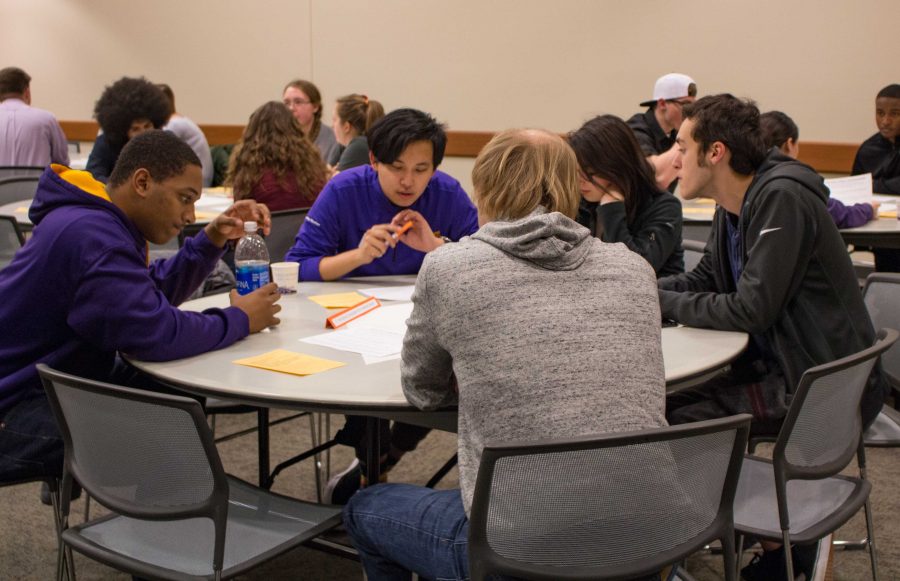 The Department of Residence (DOR) hosted World Cafe on Monday night, where students engaged in discussion on controversial topics.

Students gathered in the President’s Room in the Maucker Union on Monday night to share in cocoa and controversial conversations. The World Café, held Jan. 30, was sponsored by the Department of Residence (DOR) to give students an opportunity to broaden their understanding of hot button topics, according to Coree Burton, the Residence Life Coordinator of Hageman Hall.

Since the event was hosted by the DOR, it was also led and organized by Residence Assistants (RAs) from the various on-campus residence halls. All these RAs are part of the Inclusive Campus Team (ICT), which is one of the newer committees available since around 2014, according to Burton. They led students at the conversation tables, which switched out regularly so that people could converse on many different topics.

Krenare Loxhaj, a first-year international graduate student from Kosovo (which borders Serbia and Albania) heard about this event through social media and felt this was important to have on campus.

“I love the fact that America is so diverse and you, in a group of 10 people, can hear so many different stories,” Loxhaj said. “I’ve studied political science, and I study women and gender studies, so I deal with a lot of social stuff. […] I very much appreciate that I get to hear from different people.”

Loxhaj also discussed how her different background has affected her social views on some of the topics discussed at the café.

“When I was a kid, we went through war,” Loxhaj said. “[It was a] long [rebuilding] process, and it became an independent country. […] An oppressed society without much decision-making in our hands. Very patriarchal, and that’s why I’m a feminist.”

Along with the table topic was a conversation-starter sheet, with a list of questions to stimulate discourse.

Students could enjoy hot chocolate with marshmallows and cookies provided by UNI Catering. Throughout the event, students were given raffle tickets, and there were several winners for each raffle round. Prizes included gift cards to local restaurants like Buffalo Wild Wings.

At the “Inclusive Language and Universal Design,” table discussion went into overtime about whether there is a point in educating people on politically correct language. Students went back and forth discussing whether the older generation could change their ideas late in life and if there was a need for such a push with people from that age group.

UNI Alum Elizabeth Collins, who graduated in the spring of 2014, said she found that particular discussion to be divisive. She said she was especially frustrated by one student’s insistence on older people not being able to learn the new politically correct attitudes of the day.

“That, I felt, was really rude and very ageist,” said Collins. “Everyone has a heart — you just got to know how to get to it.”

During the discussion, Collins also cited having unpleasant experiences with elderly people. However, after working with them from her job, she saw the change her kindness brought to their perspectives of her as a Hijab-wearing Muslim.

Kortni Isom, an RA and first-year social work grad student, said this was the sixth World Café she had participated in because of her RA work. She said watching a difference of opinion at the LGBTQIA table really challenged her to look at both perspectives. Isom is also a part of the ICT.

“We really wanted to bring people together to start having those hard conversations and really challenge their beliefs,” Isom said.

This World Café was not the first one to occur on UNI’s campus, but is a borrowed idea that has been used in RA training, according to Burton. During the introduction of the event, RAs Emily Hummel and AJ Hudspeth, junior communication major, briefly mentioned the older roots of the World Café movement.

According to the World Café website, the movement started in California in 1995. Back then, it was a small group of business and academic leaders meeting at little café tables to discuss controversial topics together, rotating regularly.

They also started the tradition of writing down various new ideas onto their paper tablecloths, so that the new people at the tables could also gain insights from the previous groups. The success of this small café led to the creation of the standard World Café, which has since spread all across the globe.